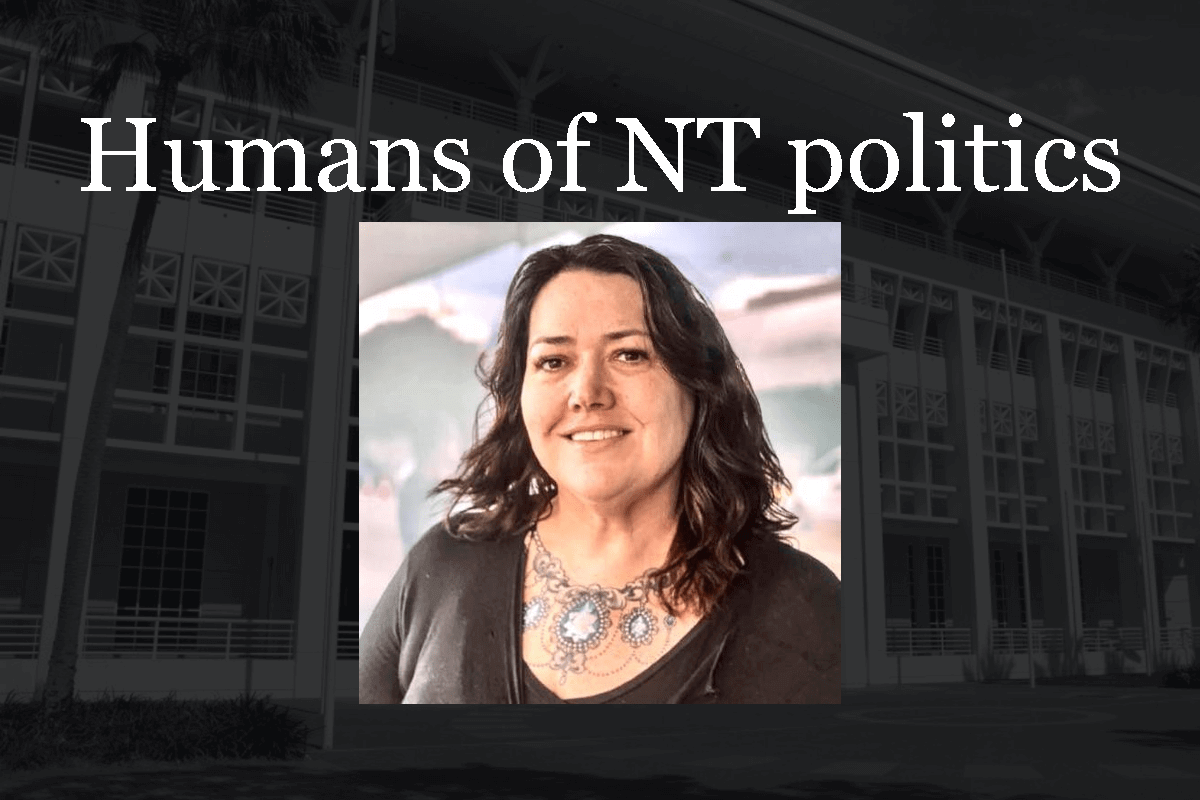 Leah was born in Darwin city to a Defence Force father and school teacher mother. She is an artist and performer. She won emerging artist of the year at the Top End Comedy Awards in 2019.

Leah is a single mother to a 17-year-old son named Toby, with her other kids attending university in Melbourne. Toby is the funniest person she knows.

She went to university back when it was called Northern Territory University. Leah studied media law and computer programming. She lives in the CBD.

Leah operated a restaurant in Cullen Bay for almost a decade. She founded the Sunset soup kitchen and goes out on the streets of Darwin CBD most nights with blankets, water and food. This year she was a finalist in the Darwin City Council Citizen of the Year awards for her community work.

Leah has been a political activist since she was 14 when she joined the fight to save the Franklin River.

It wasn’t given to me personally but I read the research of a palliative care nurse who documented the top five regrets of the dying.

The most common regret was, “I wish I’d had the courage to live a life true to myself, not the life others expected of me.”

Every day I live a life true to myself and I encourage my children to do the same.

I spent two years in southwest Victoria researching a book I wrote about a hunchback dwarf who fled religious persecution in Prussia during the 1800s and started Australia’s first ever commune.

He took in the last surviving Djab Wurrung people of that area after the bloodbath which was the squatter invasion. They were given shelter and means to support themselves and he fought for native title over Crown land more than a hundred years before Eddie Mabo was born.

Her neighbour at the time was Professer Marcia Langton and she guided me in my research into the frontier wars. Leah said she also spent years learning about her work on the Royal Commission into Deaths in Custody.

Her book is called Safe Country and is a true story and she said she hopes to be able to go back to Victoria once the COVID-19 crisis is over and continue the publishing process.

How would your best mate describe you in 20 words or less?

I have two equal besties, my girlfriend Trina said I’m funny and kind and I have a pretty face. My mate Jason says I’m crazy but on the right side of crazy. And also annoying.

What good is a movie or album going to be on a desert island?

I’d take that best selling book How to Escape from a Desert Island.

If you could invite anyone in history to dinner, who would it be?

My dad died the night we got locked down for COVID-19 and I would dearly love to have one last chance to say goodbye to him.

EWWWW! Why would you even ask that? Boys are so gross.

Wet, oh my goodness, the storms, the lightshows, that taste in the air. I love it and I miss it when I’m away from Darwin.

I have no idea what you’re talking about.

Hey, what do you get if you burn down Woolies? Coals (Coles).