Another week in the Territory and maybe our last ever week of self government. From lots of footy played in Danger Stadium to sending Kon Vatskalis out to be the NT’s travelling salesman, to our exclusive – finding Labor’s lost policy document for tomorrow’s election. This is all that is good and what is gammon this week.

One of the biggest games on the AFL calendar, the Richmond – Essendon Dreamtime game is being held on Saturday, its first time away from the MCG and we are very fortunate to have it. Throw in some more AFL with the Carlton – Gold Coast game tonight and there is some excitement over something this weekend, unlike the election. Plus throw in some more V8s and then the Alice Springs Melbourne St Kilda AFL game next weekend.

We just hope the Department of Infrastructure, Planning and Logistics had time in the last 30 hours or so to fix the 11 year-old problem of the Building Advisory Board finding TIO Stadium “unlawful”. But there is no organisation in the Territory with more confidence in the integrity of NT Government procedures and investigations into compliance issues, than the NT Independent. So all good.

They know who feeds them

The NT Independent rocked up to a combined AFL/Chief Minister Michael Gunner press conference (where the Chief was just a spectator apparently) at the doomed TIO Stadium on Thursday. The AFL media manager Nadine Rabah told the NT Independent the lobby area was full and under health rules we had to be excluded from the press conference…that was going to be held outside at a football stadium that by our calculations has a playing field of 22,275 sqm, which following the NT Government’s COVID-19 social distancing rules could hold 5,568 people. We wish they adhered to the Building Act with such vigor. Anyway, after our exclusion, then rocks up the NT News’s sports reporter Grey Morris who walked straight in. Ms Rabah told us she would provide answers to our questions (which she didn’t) before asking for security. We looked up AFL NT’s code of conduct but there is nothing stating officials cannot lie.

Unfortunately there is very limited space to hold a press conference at TIO Stadium.

Despite the AFL being the richest sporting organisation in Australia, a significant whack of AFL NT’s funding comes from the NT Government so we can understand why they must be their lapdogs. Regardless, we could do with a hug AFL and we can put it behind us.

The AFL NT not telling the truth is gammon.

Take the red pill and don the Kon glasses

There are a lot of things that can be and are said about Darwin Lord Mayor Kon Vatskalis. We will save those for another day. But bringing back the idea of developing Lameroo Beach and the potential for a coastal boardwalk – like Sydney’s popular Bondi to Maroubra walk – is something that would add some high heels and fishnet stockings to this washed up old tart of a city. While there is the draw of Kakadu and Litchfield, adding some tourism spark that no other Australian tropical city has is a great idea. If the Feds (and the rest of Australia) want to pay for it, it seems like a better use of money than the the CDU campus and the ship lift. See what Kon sees. Feel what Kon feels. Think what Kon thinks. But the manufacturers are not liable for what happens to you.

Kon is like the Kevin Sheedy of the local government world. Once someone can eventually lever Kon’s vice-like grip off the wheel of power, he should just be sent around with an open plane ticket like some Territory evangelist or an exiled king, converting the masses.

Having Kon spending more time looking through his virtual reality glasses and telling us what he sees for the NT would be good.

Goodbye to the best damned Gerry we have ever seen, and the other one

Longstanding independent MLA Gerry Wood is ending his time in parliament after Saturday’s election. The former chook farmer will be missed as a voice of reason and integrity with a respect for the Westminster system. But the end of his reign sees the continued decline of something more important than the principles and traditions of modern democracy – good old-school bloke names. 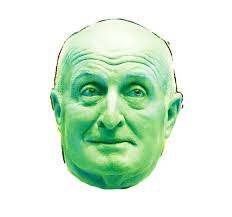 We hope we will not be losing the NT News’ Gerrymeter as well, which in ode to Gerry Wood ranks the credibility of UFO sightings based on the NT’s more reliable UFO expert.

In this Parliament we have already lost a Ken and we’re also losing two Gerrys and a Gary. We still have a Terry but he might lose his seat. That is the real crisis in our democracy.

The origins of Sweary Mick His sudden outbreak of swearing – well in public anyway, we know he has a private temper – is like a language virus that he caught around the rise of COVID-19 when his minders tried to change his public image from the limp market noodle to Sweary Mick Gundee. When asked by ABC’s Alex Barwick who it was who had told him it was a great idea to swear, he said “me” before stumbling and bumbling furiously to find the next words, which probably should have been “Maria Billias” his chief director of spin and swearing, before he came up with a triad of reasons for why he was now all f**king sweary: his heart attack, his new baby and coronavirus.

F**k us drunk, that’s an excellent and believable explanation, as we say bullshit masked with a coughing sound.

But even all powerful, all swearing Sweary Mick can’t bring himself to say the worst possible word(s) you could ever say…NT Independent.

Such a profanity is even beyond the roughest, toughest, sweariest man that ever existed: 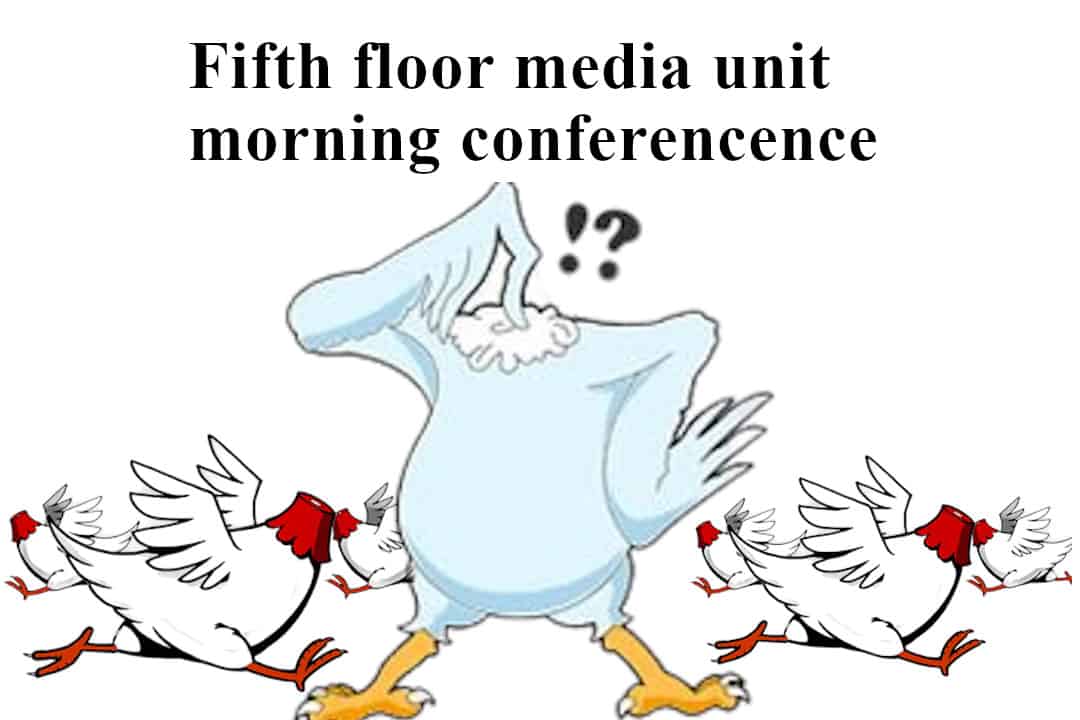 The Chief has been deeply unpopular, but we have a cunning plan. We are going to get him to swear publicly.

What is a policy? That is not even a real word: Labor

For a long time in this non-election, election-thing, parallel-election universe we have been experiencing, Labor’s only policy was the Chief’s Trump-esque slogan ‘saving lives, saving jobs’ – No one saves more lives than me. I have saved more lives than anyone else in the history of the world. I invented saving lives. Before me no one ever saved a life – and there were no policies on NT Labor’s website. We have since realised they must have lost them, and while there are some there now, they are just ones they had to cobble together at the last moment. Fortunately for them, we found their first 2020 NT election policy document which we have reproduced below to help with your voting choice. 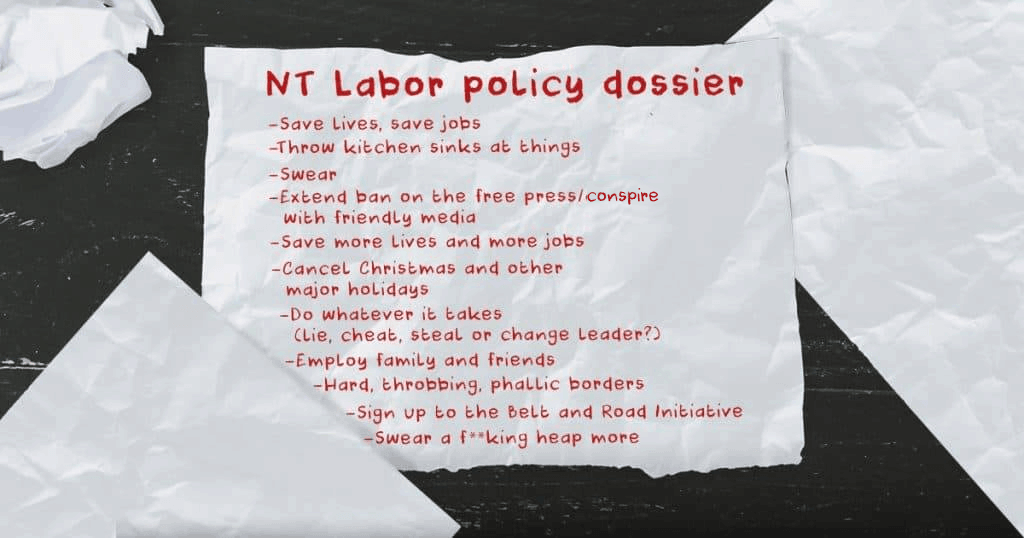 Good policies are good for the Territory. This is gammon.

If you thought there was no reason to actually vote tomorrow because there will be no sausage sizzles, we think we can help you out with some good reasons. Actually no, we can’t think of any. The NT is finally hitting its true dystopian potential and it feels like the end of times. One of the candidates should run on the slogan ‘Make the Territory kind of okayish again’; at least there would be some realism. So as it stands, here is a summary. The Territory’s probable preferred Chief Minister, the CLP’s Tracey Hayes, most likely won’t even be in Parliament. And the party seemed to have developed some of their key policies from Facebook polls, with others left over from their glory days in the 1980s. 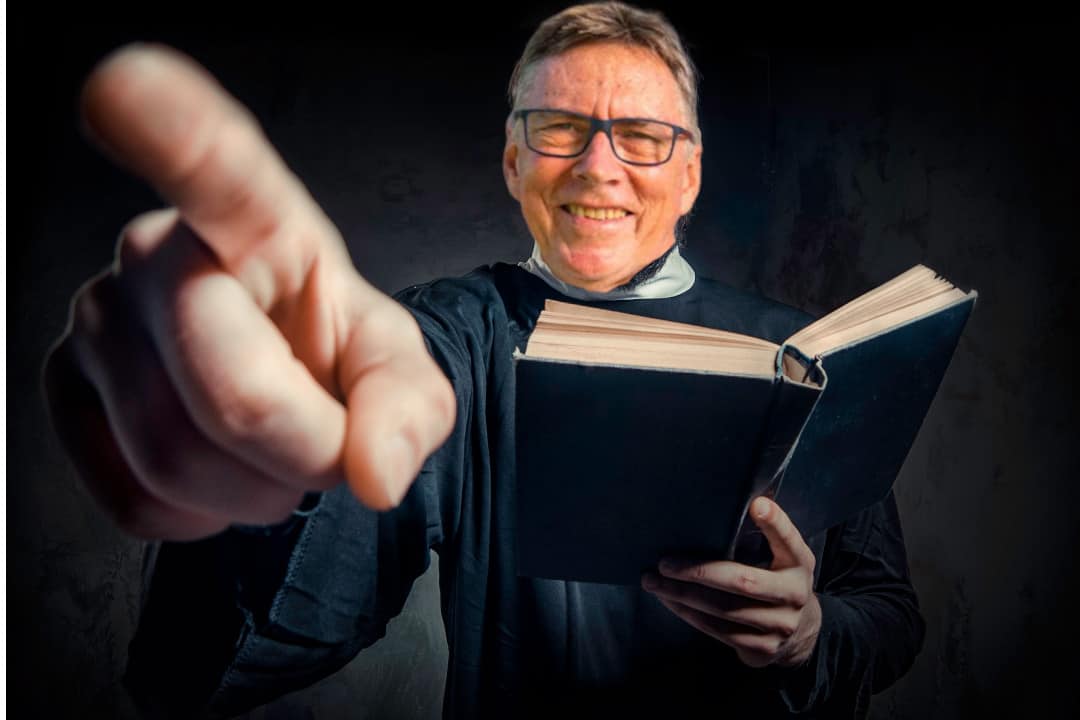 The Retribution Reverend reading from The Book of Terry.

Not to be confused with this other bloke.

Terry Alliance supremo Terry Mills aka Terry Bills, aka the Retribution Reverend, might lose his seat and it could be a party of one, Robyn Lambley. And even if they win a few other seats you could probably mark them down as ‘future independents’ with the dysfunction in that ‘party’. While with Labor you don’t really know who is going to be chief minister in six months time (it will depend on whether there is any kind of slaughter), while the current CM used one of his last media appearances to tell people the number of national cabinet meetings he’s been part of (26 if you’re interested, he seems to have been genuinely counting), like he’s a teenager trying to convince his mates he’s not a virgin.
Anyway, as they say, onwards and downwards.