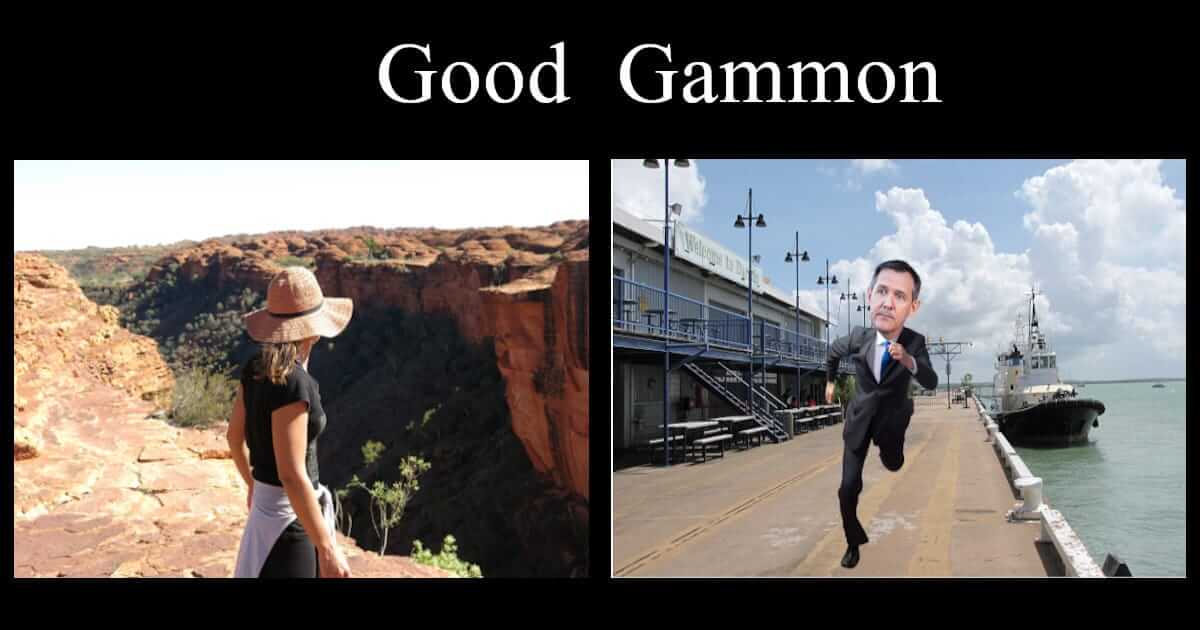 Another week in the Territory and Australia is shipping us more ‘rona. From Turkey Day with no kaboomy to the Government flogging off heart-lung machines in a two-for-one deal on buy, swap or sell, to Stockholm syndrome striking down the Territory’s most popular bloke. This is what has been good and what has been gammon this week.

COVID-19 back in town

Coronavirus caught a flight to the Territory again this week. And we can expect more cases here as the borders fully open and before there is a vaccine.

It goes without saying, coronavirus is gammon.

The Mindil Beach markets were back on Sunday and a hefty amount of folks (although down because of the lack of tourists) made it down for a bit on sunset watching, whip cracking and a bit of deep fried.

Having the Mindil Beach markets back is good.

This week, Justice Stephen Rares ordered the Federal Government pay $2.94m in compensation to the Brett Cattle Company for damages from the 2011 snap live cattle export ban after he found the decision by the former agriculture minister Joe Ludwig was reckless and malicious. While the Prime Minister Scott Morrison strangely said the Coalition was still considering an appeal, he said he would ensure “their injury, and their hurt and their loss is addressed”.

It is good the money is beginning to flow to the northern cattle industry.

Went off (almost) without a pop

It was Territory Day – which our transcribing program interprets as Turkey Day – and it is always good to celebrate unicameralism although it would be great if we re-enacted the Darwin rebellion each year. But Turkey Day lacked its usual happy bluster with no fireworks. And it left us sadder than listening to Cat’s in the Cradle.

It was good to celebrate self government, but gammon that we could not detonate for democracy.

Territorians snapped up more than 26,000 $200 Gunner Government tourism vouchers between midnight and about when the sun came up. They are worth about $5 million and with the punters having to kick in an equal amount it is a small relief for some tourism businesses.

It completely slipped their minds. Honest.

The ABC reported Health Minister Natasha Fyles talking about the government dumping plans for a cardiothoracic surgery program last year but not telling anyone.

“We certainly share as much as we can with Territorians. It wasn’t deliberate to not share it,” she said.

Excuse us while we make a coughing sound while saying bullshit. It slipped her mind. The dog ate it.

They then had to flog off equipment they had already bought including two heart-lung machines worth $1.2 million, that they probably had to put on the the Darwin Buy, Sell, Swap and Wanted Facebook page.

“Heart-lung machines, one owner, a little old lady who only used to drive to church on Sundays. Genuine offers only. No tyre kickers.”

It is gammon the Government secretly scrapped the cardiothoracic surgery program. But we should be grateful the Darwin Turf Club has a taxpayer funded grandstand.

More on the Government’s forgetfulness

Fortunately the Gunner Government does not forget everything. On March 15, 2018, they remembered to put a press release out about a new bill that would give journalists better protections against having to provide their confidential sources to a court.

In that public announcement (that they remembered to put out) Ms Fyles as Attorney-General said: “the Territory Labor Government is restoring trust in government…”, “Territorians want and deserve a government they can trust – and ensuring a strong local media is key to delivering that.

“Throughout history journalists have been key to holding governments to account and delivering significant social change,” she said.

There is something wrong with this that we can’t quite put our finger one. Oh that’s right, the gross hypocrisy of the same Government picking and choosing what journalist ask them questions.

Stifling the free press is gammon.

The federal member for Solomon Luke Gosling recently hit the streets with his bad boy new newspaper. There are 26 photos of Mr Gosling in just 16 pages of the Gosmate Times, and the only page his mug doesn’t appear on is the births and deaths page. But we have fixed that for him.

Increasing fears are being held for the Northern Territory’s Chief Minister Michael Gunner who seems to have a geographic specific case of agoraphobia. The Chief has not been spotted outside in Darwin for 22 days since he ran from the NT Independent at a press conference on Stokes Hill Wharf. He was spotted outside around Alice Springs and the Tiwi Islands but has held no press conferences outside in Dar Dar since April. It really is a case that would baffle medical science. We are very concerned that he might get rickets.

The medical condition that makes the Chief pick and choose what media he takes questions from is gammon. Get well soon Chief Minister.

The psychological mystery of loving an abuser

We tried our hardest, even starting a Go Fund Me page to free the NT’s chief health officer Dr Hugh Heggie from being a political prisoner in a Girraween gulag, but two unfortunate things came out of it. One, we didn’t even raise a sniff of a dollar for the poor bugger, and two, we realised Dr Heggie is suffering from Stockholm syndrome and is now in love with his captors, the NT Labor ministry.

The plight of Dr Heggie now being an emotional, as well as a political, prisoner of the NT Government is gammon.