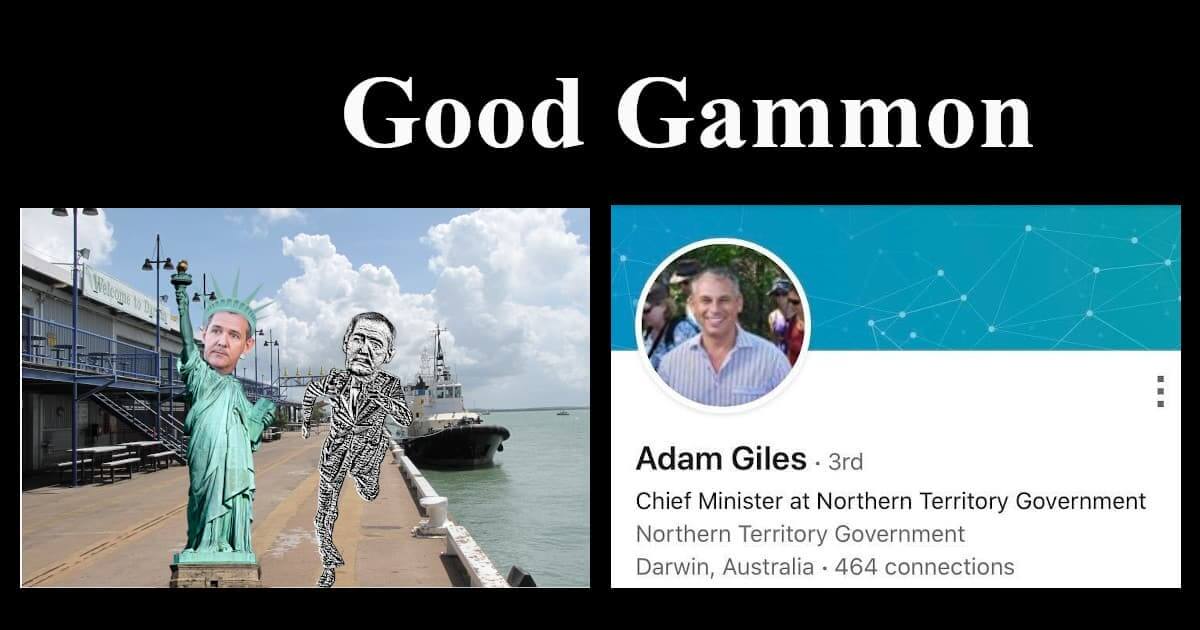 Another week in the Territory and hello to Australia again (screw you Melbourne and Sydney). From quarantineless visitors to the NT, to our Anti-Chief Minister, to our idea for the Territory Mount Rushmore, here is what is good and gammon this week.

Mandatory quarantine for visitors from non hotspot parts of Australia has been dropped with the Dry still kicking in the Top End like the good bitch it is. Planes from interstate have been arriving in greater numbers, even from Australia’s new ginger kid state, Victoria. Territory businesses will be happy and people will be able to visit relatives and friends again. However, many will be concerned about the COVID-19 re-infection that is coming, particularly fears for Indigenous communities and potential lock down restrictions.

“I’m not afraid to lick a grey nomad”: Chief

We can all remember seeing the picture of politicians, mayors etc who pose for the cameras to drink water recycled from sewage to give people confidence that it is all good to throw down the gullet. We expect Chief Minister Michael Gunner to be out at a caravan park licking grey nomads to give us the sign it is all okay.

Licking grey nomads is good but probably illegal in some states. 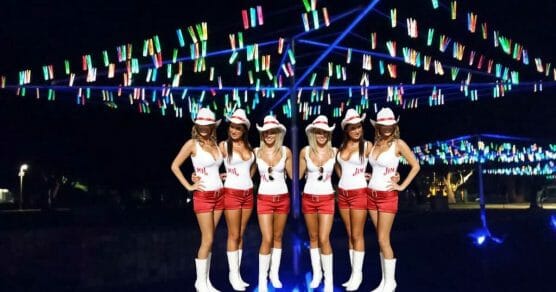 The Government has said that conservatively 46,000 people travelled to Darwin for the greatest plastic water bottle light exhibition the world has ever seen, Tropical Light. We pointed out that it attracted more than four times the number of people that the V8 Supercars. As the Festival of the Plastic Water Bottle was given $3.5 million for six months, compared to ICAC getting $3 million, we reckon shutdown ICAC, and spend the extra money on more lit up plastic bottles, that’s what the people really want. Then the Government could safely make up all the attendance figures they ever wanted to.

Spending money on ICAC is gammon when it could be better spent thrown at that English bloke who is the world’s foremost expert on plastic water bottle light exhibitions.

I do stand for something, I promise. I just need to run a poll to find out what it is

We hear Territory Alliance approached a former NT minister who had responsibility for onshore gas, and an employee of a fracking company to be candidates for the party that is kind of, sort of, maybe, firmly against fracking (that possibly could be done safely).

Recruiting pro fackers for an anti-fracking party is gammon.

Here are some other confused people 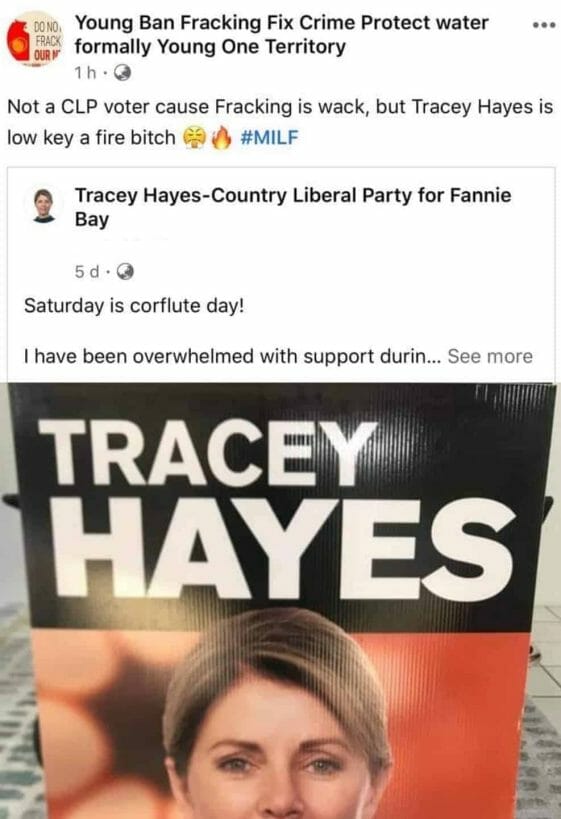 The Territory has a bright future to look forward to when the Young Ban Fracking Fix Crime Protect Water apparatchiks are old enough to become politicians and guide us with their considered political wisdom.

Refusing to go for a second time

The chief minister who stared down the ‘midnight coupe’ and the Brief Minister Willem Westra van Holthe, Adam ‘I love Blair Cottrell’ Giles, is refusing to leave the role even though enjoying beer and darts on the balcony of the fifth floor must seem a distant memory. Like the Catholic Church and its history with ‘antipopes’ when two people are claiming the role, it seems we have an Antichief. Who would have thought four years ago that this may seem like a decent alternative? But then again, think about a parallel universe that may exist where Giles has been Chief Minister for close to eight years; COVID-19 doesn’t look so bad. 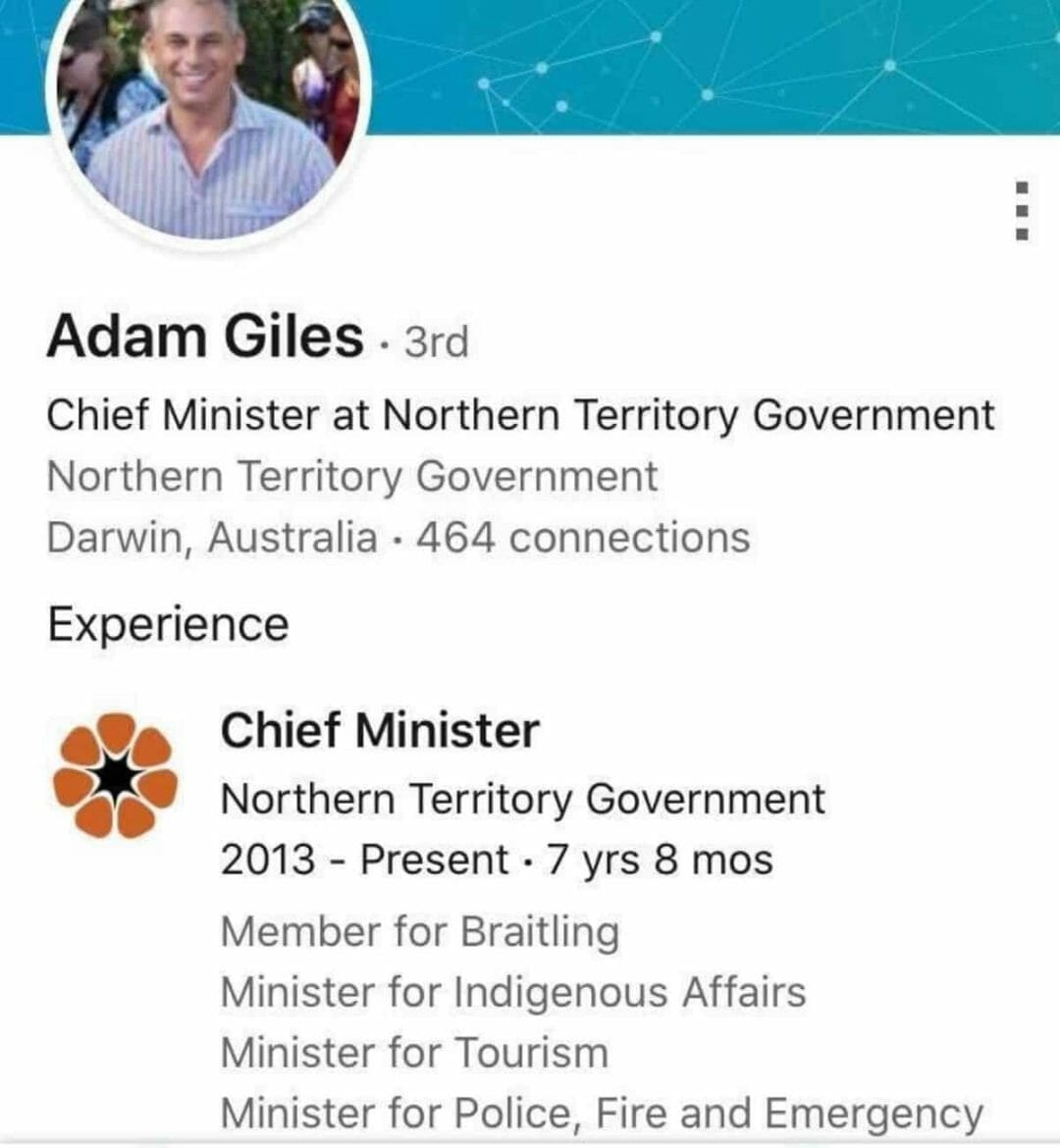 Even having one Chief Minister at a time is generally pretty gammon, having two is absolute buljit.

We said last week we were worried NT deputy health officer Dr Di Stephens hadn’t been seen since March. We thought she may have been assassinated but then today we see the government had her at a press conference at the former workers’ camp cum political prisoner gulag/COVID-19 quarantine venue of choice at Howard Springs. It shows Gunner and Co. do read the NT Independent to get their weekly dose of ‘hate’. But did anyone actually see Dr Di leave? We now believe she’s being held there after she slighted the Health Minister Natasha Fyles, who we also believe has her sights set on taking her job. She is qualified, as a former swim teacher she has her CPR first aid training, which is basically as close to studying epidemiology as you can get.

It is gammon that yet another high ranking health official is being held as a political prisoner.

A step in humanity’s march forward

It wouldn’t be the new normal without the Chief remaining more afraid of the NT Independent than he is of COVID-19. Just to show we care about him, we have been counting the days since he ran from us at a press conference to hide in Parliament house. It’s 35. Previously we’d thought he had geography-specific agoraphobia but after consulting with a medical expert (yes it was Natasha Fyles) we realise he is actually suffering from newspaper-specific agoraphobia. In honour of our brave Chief, his battle with his mental sickness, and his daily contravention of the NT Legislative Assembly code of conduct and ethical standards by not fostering freedom of reporting by the media and the independence of the public service, the NT Independent will be digging deep into our pockets and funding a statue to commemorate the day. We have created two artists’ impressions, one entitled ‘Gunner enlightening the world’, and a haunting piece we simply call, ‘Custodian of democracy running towards totalitarianism’. As an alternative we could carve his face into Uluru in a Territory Mount Rushmore. 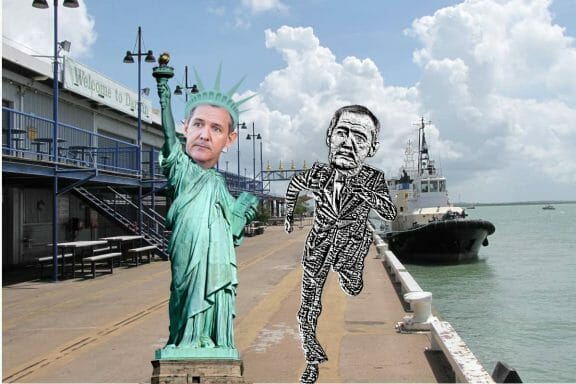 “Danger – if you meet it promptly and without flinching – you will reduce the danger by half. Never run away from anything. Never!” Winston Churchill

A Chief Minister breaking the NT Legislative Assembly code of conduct and ethical standards every day for more than three months, and making his colleagues do the same, is gammon.

The Chief is going to be on the ABC’s Q&A program this week which will be good for what we suspect will be his future run at Canberra and becoming Prime Minister.

Make it much gooderer

There was a Government tender to “make good” Darwin’s Health House. They should put the Territory economy out to the same tender.

Massacring the English, one press conference at a time 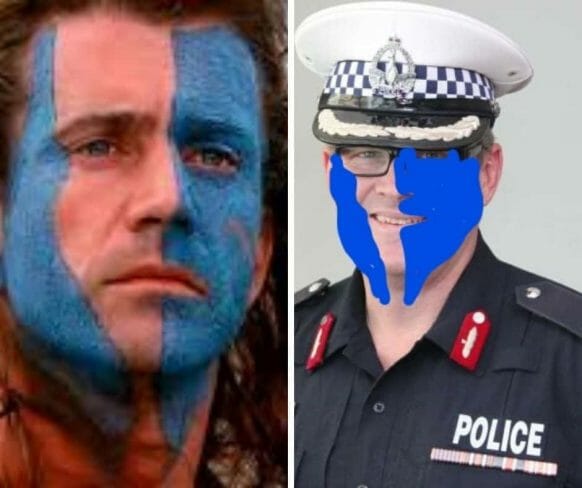 “Every day I have thought of you Jamie Chalker,” William Wallace.

The Police Commissioner Jamie Chalker is never far from our minds when we are thinking of the William Wallace award for the massacre of English. This week he was at a press conference when he copped a question about a charge against Children’s Commissioner Colleen Gwynne and why the NT Police’s Special References Unit was used to investigate her. Well, we presume that is what he was answering because we can’t actual tell from what he said.

“So, it was established, pretty well in line with when the ICAC was starting to be created in a conversation around the ICAC being created, so that those referrals could be passed into the Northern Territory Police, into a sterile corridor to enable those investigators to undertake any referrals that were provided to them,” he clearly stated.

We need to put the Police Commissioner’s speech out to tender with the requirement to “make good”. Gammon.