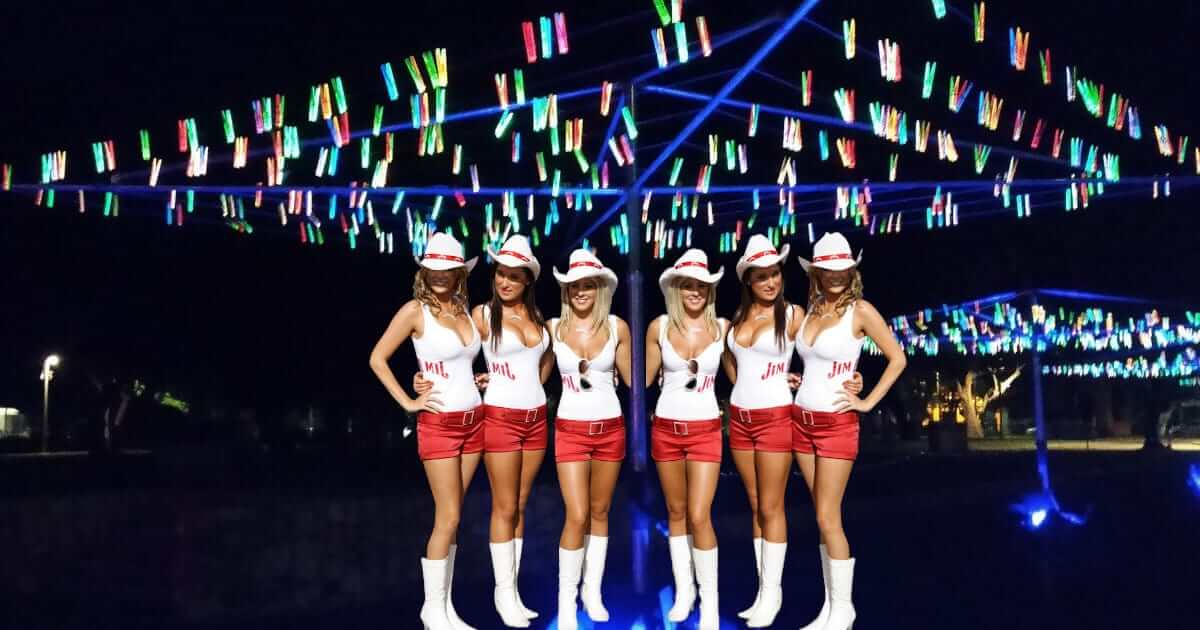 Over 46,000 people came to Darwin to see Bruce Munro’s Tropical Light exhibition, the NT Government claims – more than four times the number who came to the V8 Supercars at the event’s peak.

The “conservative” figures were based on a methodology that saw visitors counted by event volunteers, except over Christmas and when it was raining.

“Northern Territory Major Events Company acknowledges this is a conservative figure as volunteers did not record visits when there was adverse weather conditions that prohibited it,” the government company said in a public statement.

“In addition, there was a lack of volunteers over the festive period which meant attendances were not recorded.”

In its complete explanation of how visitor numbers were measured, Major Events said volunteers counted individual visitors to the installations over the course of the exhibition.

“The highest number of visits at a site was used to record the day’s attendance,” its explanation said.

“The daily cumulative attendance resulted in 46,219 attendances being recorded.”

The exhibition cost $3.5 million for six months or $19,444 a day, more than the $3 million the Independent Commissioner Against Corruption is funded annually.

The attendance figure was provided in response to the question, “please advise if it is true that 45,000 have visited Darwin for the Bruce Munro: Tropical Light exhibition,” and, “if yes, how is this figure measured?”

Major Events uses the term ‘attendees’ but if taken as an answer to the question asked, it would mean there was 46,219 individuals, not a total crowd of 46,219 who visited Tropical Light, with people potentially visiting multiple times.

Also, based on the question, it would mean the 46,219 figure was the number of people who visited Darwin from elsewhere.

When the exhibition launched, the Gunner Government predicted 50,000 visitors would “make the trip to Darwin” for the exhibition which was to run from November 1 to April 30, but was cut short, ending on March 25 because of COVID-19.

No minister has issued a press release revealing the amount of people who visited Tropical Light, how many came to Darwin, or how many of those came specifically for the event.

Tourism Minister Lauren Moss said in a press release last year that 36,077 people attended three days of the V8 Supercars, but did not specify if that was 36,077 individuals or the total crowd with people attending on multiple days.

The best attendance year for the V8s was 2012. According to an economic impact report prepared by Hall & Partners for Major Events and Tourism NT, there were 48,181 attendees over three days of racing but only 33,900 ‘unique visitors’.  Of those, only 10,440 people came from outside Darwin.

The NT Independent asked Qantas, Virgin and Jetstar if the airlines had seen an increase in visitors because of the event but they had not responded by publishing.

Major Events said the counting methodology was adopted by research company MI Associates with methodology verified by StollzNow, “a research and insights agency”. On its website, MI Associates lists among its clients, the International Olympic Committee, ANZ Stadium and World Rugby.

Major Events refused the NT Independent’s request to explain in more detail how they counted the crowd.

StollzNow referred the NT Independent to MI Associates when asked for a better explanation of how the counting or estimation was done, while MI Associates’ Darren Ring did not return calls.

There is no record on the NT Tenders website of MI Associates winning a tender to perform the work for Government.

Territory Opposition leader Lia Finocchiaro said she would like to see the actual economic benefit of the exhibition to the Territory, given the Gunner Government’s record of failing to disclose information.

“Did Territorians get value for money? How many people travelled to the Territory with the exhibition a prominent reason for coming?” she said.

“We need to understand what the actual benefits were, to help us with planning for future attractions.”