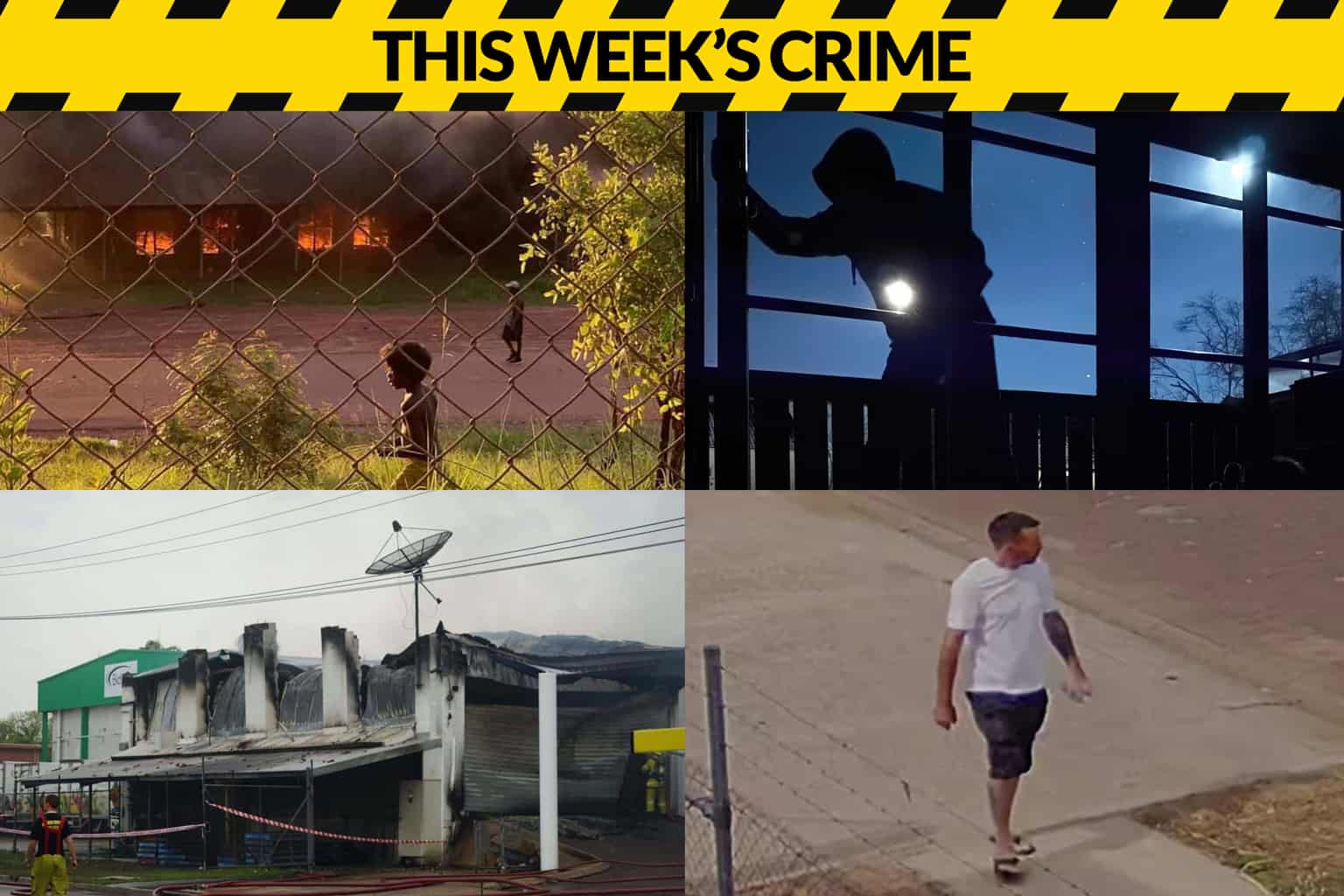 From Wadeye’s violent inter-family hostilities, to a disabled senior who got robbed and assaulted in his home, to a knife-wielding robber who avoided a jail sentence, to a police officer kicked in the chest while booking an offender, and to authorities looking for a person of interest in the NT Oriental Emporium arson. This is what the NT Independent reported on cops, crime, and court over the past week. Read them all here:

NT Police have released an image of a man they want to speak with in connection to the alleged arson of the NT Oriental Emporium last month and are calling on the public to help identify him.

Police described the man as in his “30s – 40s with short dark hair and a full sleeve tattoo on his left arm, and was wearing a white T-shirt and dark shorts”.

Wadeye will be placed under a “rehabilitation phase” following reports of social unrest in the remote community over the weekend, NT Police said on Thursday morning, days after becoming aware of the volatile situation.

A house was allegedly set on fire, cars burned, mulitiple injuries suffered to bystanders and other property damaged intentionally as a result of the ongoing riot in the community.

‘I couldn’t get up’: Cops arrest one in brutal attack and robbery of disabled senior, as victim recounts ordeal

One of four males who allegedly robbed and assaulted a 67-year-old wheelchair-bound man in his Malak residence has been charged, NT Police said, while the victim has described the ordeal as a scene from a horror movie.

Police said they are actively hunting down the three other alleged thieves, aged between 17 to 21, involved in the robbery and assault.

‘I couldn’t get up’: Cops arrest one in brutal attack and robbery of disabled senior, as victim recounts ordeal

Ongoing inter-family hostilities in one of the Northern Territory’s largest Aboriginal communities erupted over the weekend, leaving several people injured and a house set on fire, NT Police have confirmed.

But Police said they are only now “considering stepping up resources in the community”, after days of increased unrest that has left many in the community feeling “very unsafe”.

NT Police say they have located missing 17-year-old Makasha Prayta and her one-year old child and both are “safe and well”.

The woman and her child were reported missing after her family had not seen her for more than 10 days.

A 14-year-old has been arrested and charged following an alleged aggravated robbery and vehicle theft that saw two men threatened with an “edged weapon” in Casuarina Square carpark on Monday, NT Police said.

Police said the men, aged 28, were returning to their vehicle in the carpark around 7:30am when they witnessed a group of youths allegedly walking away from their vehicle with a bag.

A man has been sentenced to jail after a family feud in a remote community ended with another man being speared in the chest by an arrow fired from a bow that narrowly missed the victim’s heart.

An NT Police officer was allegedly kicked in the chest while booking a man involved in an assault at Lasseters Casino in Alice Springs overnight.

Southern Watch Commander Adrian Kidney said around 11:30pm on Monday, police attended to a report of a break-in at the casino.

A group of Alice Springs teens have been apprehended by the NT Police following two separate unlawful entries over the weekend, while two others remain on the loose.

Police said on October 30 around 1:30am, a group of four youths, three 15-year-old males and a 16-year-old male, forcefully entered and searched through a house in Gillen while the residents were asleep.

A 30-year-old Darwin man who wielded a steak knife to rob the Coles Express service station in Nightcliff in February – and later turned himself in because he “felt bad” – has avoided a jail sentence.

A prominent Darwin barrister says his pursuit to reduce the Northern Territory’s “racist” and “shameful” incarceration rate – higher than anywhere else on the planet – has been stifled and censored by the Australian Lawyers Alliance.