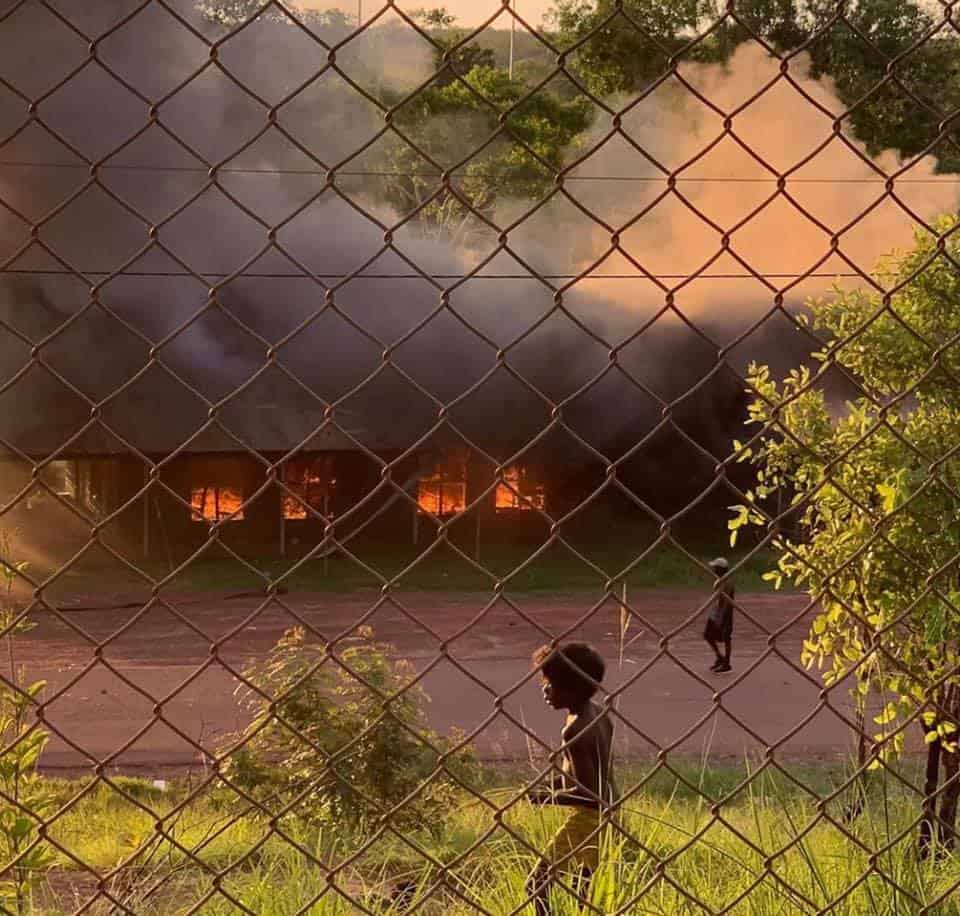 Ongoing inter-family hostilities in one of the Northern Territory’s largest Aboriginal communities erupted over the weekend, leaving several people injured and a house set on fire, NT Police have confirmed.

But Police said they are only now “considering stepping up resources in the community”, after days of increased unrest that has left many in the community feeling “very unsafe”.

Several photos and video sent to the NT Independent shows the outbreak of violence in the community, including images of a house being burned down during a riot and the extent of injuries sustained by some residents caught in the crossfire.

A school nurse in a Wadeye compound was pelted with rocks while trying to escape and suffered lacerations to the foot.

There were also reports of a man being shot in the foot with an arrow from a crossbow, as some reportedly evacuated out of town by Care Flight for medical treatment.

“Who would want to be a police officer sent a community like that?” said one police spouse to the Independent.

“Partner finished nightshift last night. Very unsafe for them and the community. They cannot get anyone to work.”

NT Police have not released an official statement on the situation at Wadeye, as of last evening, but told the ABC they were monitoring the situation.

A local man the ABC spoke with said he believed the violence had escalated due to a young man being injured some weeks ago.

Wadeye, about 350km south-west of Darwin, has a population of around 2,300 and a long history of gang fighting.

Former Labor Member for Daly Rob Knight told the ABC in a 2007 interview that there have been problems in the community since its establishment in the 1930s when different Indigenous groups were placed together by missionaries.

Mr Knight said that mix of people has led to a “pressure cooker” effect when the community is cut off from the rest of the Northern Territory during the wet season.

Meanwhile, COVID-19 may have fuelled social unrest in the community as payments such as JobSeeker are being used on ‘grog chaos and gambling’ in remote communities, Indigenous leader Noel Pearson was quoted saying in recent news reports.

Mr Pearson has also said Indigenous leaders’ repeated calls for the supply of alcohol to be limited in their communities have been ignored by political leaders.

The school principal of Our Lady of the Sacred Heart Thamarrurr Catholic College in Wadeye, John Young, declined to comment on the current issues when contacted by the NT Independent, but he told The Australian in August that student attendance had dropped by 30 per cent since increased COVID-19 welfare payments began.

He said teachers and staff were struggling to turn up to work regularly as they battled fatigue as a result of being kept up throughout the night as alcohol wreaked havoc on the community where the consumption of liquor is restricted.

Students too were unable to concentrate on school because of the ongoing disturbances.

“There’s been a huge increase in public drunkenness — people are drinking all night. There’s fighting, and the yelling and noise is constant,” Mr Young told The Australian.

“A lot of families have moved out of town and gone back on country to escape the drunks, and the kids aren’t coming to school.”

Around 44.5 per cent of adults were unemployed and the family income was just a third of the national average, according to the 2016 Census.

Mr Young said many of the locals had benefited from the increased coronavirus welfare allowances since March, but the cash appeared to have fuelled a surge in gambling, as residents ran “all-night casinos” playing card games on the verandas of their homes.

He said “unintended consequences” had resulted to the increased welfare payments.

In July, authorities intercepted a smuggling attempt involving a massive amount of hard liquor and cannabis into Wadeye.

A total of 34 liquor bottles were seized – 24 of which were taken from one vehicle alone, while 54.1 grams of cannabis were also intercepted during the checkpoints, police said.