Wadeye will be placed under a “rehabilitation phase” following reports of social unrest in the remote community over the weekend, NT Police said on Thursday morning, days after becoming aware of the volatile situation.

A house was allegedly set on fire, cars burned, mulitiple injuries suffered to bystanders and other property damaged intentionally as a result of the ongoing riot in the community.

Four people had to be airlifted from the community to be treated for injuries related to escalated violence over the weekend, according to CareFlight.

Reports from the community indicated police had been slow to take action, but after media reports of the nature of the riots, police issued an official statement on Thursday morning.

A 32-year-old man was arrested Thursday and is in custody pending charges including four counts of going armed in public, two counts of serious harm, aggravated assault, three counts of taking part in riot, and engaging in violent conduct.

Acting Divisional Superintendent of the Central Division, Tanya Woodcock said police will object to the granting of bail which will be determined by a Local Court Judge after charges are laid. 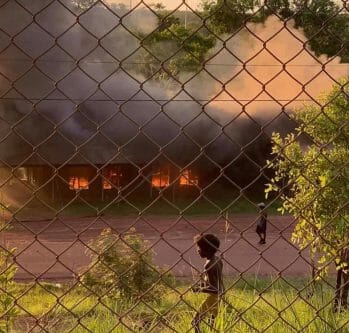 A house was burned down as violence erupts in Wadeye. Pic: Supplied.

Another five males, aged between 24 to 45, have also been apprehended for taking part in the riots and have been taken into custody to appear in the Darwin Local Court on an undisclosed date to face charges.

Three men face only two charges for taking part in riot and armed with an offensive weapon.

A 31-year-old male has been charged with violent act preventing police at a riot, causing damage to property, going armed in public, and endangering the occupants of a vehicle.

A 45-year-old male has also been charged with aggravated assault, recklessly endangering serious harm, and going armed in public.

In a video sent to the NT Independent on the ongoing riot in Wadeye, more than 30 locals can be seen participating in the riot.

Meanwhile, a traditional owner in Wadeye, told the ABC that the unrest between rival family groups had escalated in the weeks since a young man had been seriously injured.

Acting Supt Woodcock said the arrests are a culmination of the “rehabilitation phase” in the community.

“The community has been under significant duress due to the actions of a relatively small group of residents,” she told the ABC.

“These people will now be held accountable, and through continued engagement with residents, we can look forward to restoring calm to the community.

“Now, we will begin what we call ‘rehabilitation’, where we’ll be working with the community members, particularly those in the areas affected by the recent events, to clear the roads and help residents clean their yards.

“This will go a long way toward repairing the amenity and safety of the community,” Supt Woodcock said.