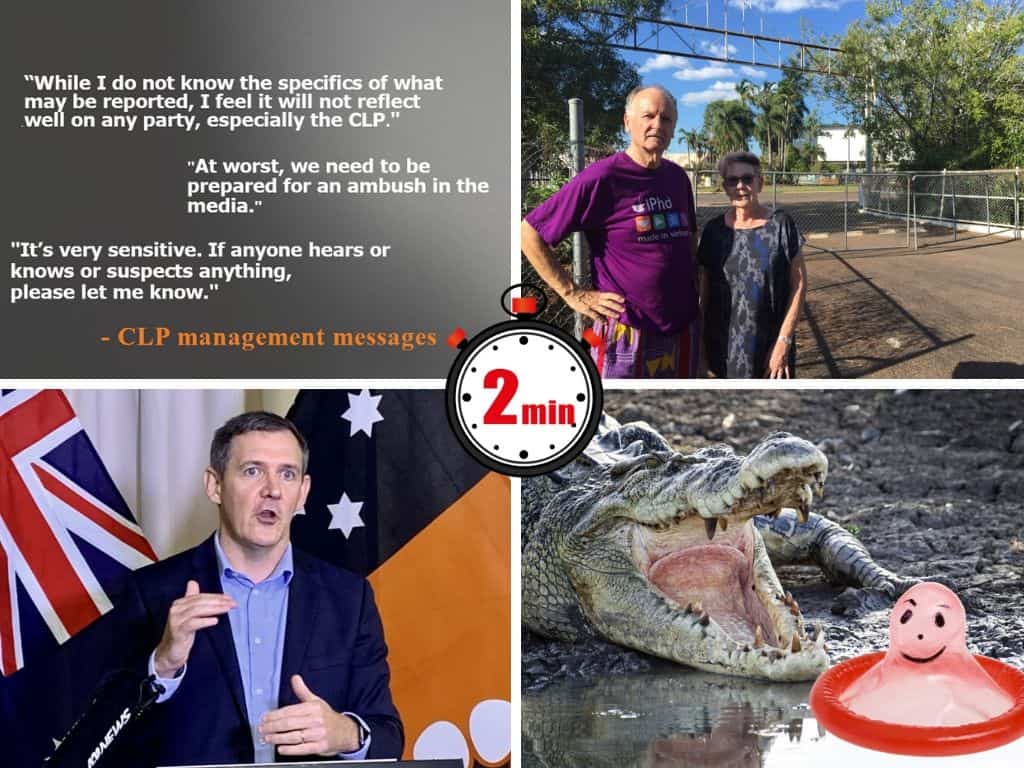 In case you’ve been ducking and running from the NT Independent news, here are some of the significant stories that made noise this week: Chief Minister Michael Gunner to open the borders, but what was the chief medical officer’s advice; CLP management probing the alleged assault of Senator Sam McMahon; controversial Darwin Turf Club grandstand in more controversy; and the great government condom give away.

The NT’s Chief Health Officer has said it is safe to open the Territory’s borders immediately, despite Chief Minister Michael Gunner’s decision to wait another four weeks to allow interstate visitors in.

Mr Gunner announced today that the Northern Territory’s borders will reopen on July 17, saying he arrived on that date after meeting with Chief Health Officer Hugh Heggie earlier this morning.

But in an apparent messaging ‘mix up’, when asked this afternoon in the Public Accounts Committee hearing if the NT’s borders were safe to open immediately, Dr Heggie confirmed he believed they were.

Senior Country Liberal Party management members are investigating the alleged assault of Senator Sam McMahon as domestic violence, and are also looking into who in the party knew about it and whether it was reported to police, internal party messages reveal.

The party raised concerns internally about Ms McMahon sharing a house with her chief of staff Jason Riley and another man, the messages show.

As first reported in the NT Independent, the CLP launched an investigation on Saturday after receiving more information about the physical assault allegations as well as other alleged “misconduct” in the Senator’s office.

The company responsible for building the Darwin Turf Club’s controversial $12 million taxpayer-funded grandstand is being investigated for breaching Environment Protection Agency guidelines during the construction of the project.

Construction company Jaytex, along with the Turf Club itself, have been accused by a group of Fannie Bay residents of disregarding assurances made to the EPA and Development Consent Authority over several aspects during the grandstand’s construction phase.

The accusations include installing fire-fighting tanks not on the original development application documents, breaking EPA guidelines by working late into the night and using an unauthorized entry to the racecourse in a bid to fast-track the project to ensure it opens to the public next month.

A joint NT Racing Commission and NT Consumer Affairs probe will investigate the Darwin Greyhound Association over a series of complaints involving the association’s operations and greyhound racing.

The complaints about DGA’s operations came from current and former members and trainers of the association, Chairperson of the NT Racing Commission Alastair Shields said.

It remains unclear the exact nature of the complaints and how far back they date.

Snake skin, tingling, ribbed, glow in the dark, ‘real feel’, and x-large condoms – the government cares about your sexual pleasure

Gentlemen of more ample proportions are catered for with both green and yellow glow-in-the-dark condoms in the extra large size stipulated under a tender to supply more than 80,000 taxpayer-funded Johnnys for the Department of Health.

However, the government is providing only ‘warming’ condoms, not ‘cooling’ ones that would allow Top Enders to safely unburden their lust during the Build Up.

The 81,000 condoms requested under the three-year contract, are broken down into in the categories of coloured and flavoured, coloured – no flavour – no colour, and no flavour, non latex, and textured and sensation lubricated.

But ladies do not think the government is not thinking of you (well they are but to a lesser degree), with 2,000 non latex condoms for women – one size fits all, and 25,000 dental dams requested.