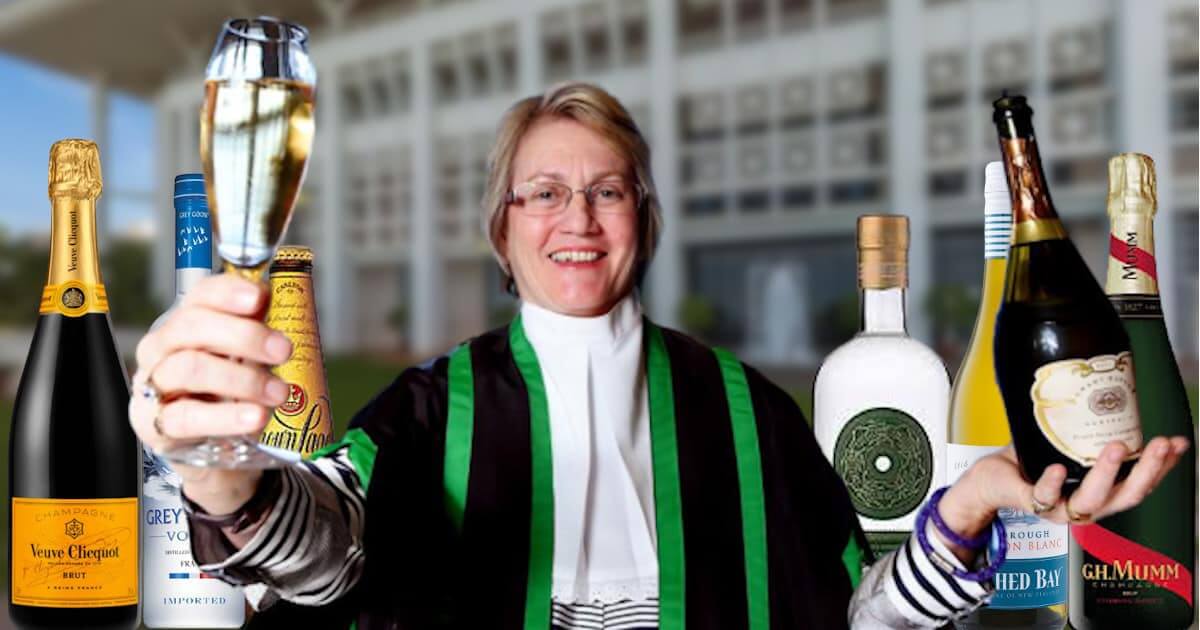 Speaker Kezia Purick’s office spent tens of thousands of taxpayers’ money on booze over the last three years, including on one $1200 bottle shop run, as well as a further $100,000 on hosting exclusive events and dinner parties for herself and preferred social groups, internal documents obtained by the NT Independent reveal.

The documents also show purchases of alcohol through retail outlets were made with little oversight or consideration to costs.

The NT Independent has been unable to verify whether the documents released through Freedom of Information laws are full and accurate copies of all the hospitality invoices. The Department of Legislative Assembly did not release totals, as requested between late 2016 and early 2020, and has a history of withholding public information.

However, the documents released show the only oversight measures in place for purchasing vast amounts of alcohol were internal approvals made by Ms Purick’s subordinates when the reserves dwindled or when somebody wanted to try a new product.

Discrepancies in prices on some invoices have not been explained.

The records show the vast majority of request forms for “hospitality expenditure” were filled out by Ms Purick’s former executive assistant Martine Smith and approved by Deputy Clerk Marianne Conaty instead of Clerk Michael Tatham, with no apparent external oversight in place, and in some instances, with little explanation of what the money was for or how taxpayers benefited from the spending.

One request was approved with the explanation listed only as: “Bottle of gin: $110”.

Ms Purick acts as public employment commissioner for the Legislative Assembly’s employees and as minister of the department.

It is also unclear what hospitality budget was in place, or if there was a budget to “restock Madam Speaker’s suite”, as bottle shop runs were called internally.

The practice has also raised the question of who was collecting the Woolworth’s points on the big spending purchases that could then be used for discounts on future shops. Copies of receipts show the points were accumulated, but it does not appear the points were used to reduce the cost to taxpayers of the grog runs.

Ms Purick did not answer a question put to her by the NT Independent about who was collecting the Woolworth’s points on the taxpayer purchases or what they were being used for.

The records show Ms Purick’s preferred wine is Boatshed Bay – a “sauv blanc” – which ranged in price from $10 a bottle to $20 over the last three years. However, the price does not appear to have been an issue of concern when purchasing alcohol for the Speaker’s office.

According to one expenditure request dated March 21, 2018, Ms Purick’s former assistant Ms Smith wrote that she intended to purchase that brand in multiples of six to get the cost down from $20 a bottle to $15.

“As there is only a couple of bottles in the suite, I will get some tomorrow and back order the rest so the IR is sought on the maximum price of $20 but will prob (sic) be less if I am able to purchase in 6 – $840,” she wrote.

Only one invoice from that time was included in the returned FOI documents, which showed a few days later Ms Smith ordered 27 bottles at the inflated cost of $20 a bottle.

The prices varied wildly, with records showing taxpayers paid $960 for 48 bottles of Boatshed Bay in August 2018 – $420 more than the cost in October 2018 for the same number of bottles.

Between 2017 and 2019, Ms Purick’s office ordered more than 650 bottles of Boatshed Bay, along with other brands of beer, wine, champagne and hard liquor, including a $110 bottle of NT-made Green Ant gin, according to released invoices.

The most expensive single grog run occurred last December, a few days before Christmas, when Ms Purick’s office charged taxpayers $1,211 for 40 bottles of Boatshed Bay, four bottles of Veuve Clicquot at $69 a bottle, four bottles of Mumm Cordon Rouge at $62 a bottle, and other high end and mid-range brands of wine.

Other invoices from bottle shop runs ranged from between $66 to $900.

Private parties and events for hand-picked groups charged to taxpayers

Under Parliamentary convention, the Speaker of a Parliament performs ceremonial roles as well as administrative roles, and often hosts different groups as the representative of Parliament.

Often allowances are given to the Speaker’s office to assist with hosting ceremonial events, although the budget for this purpose has never been disclosed in the NT.

According to the released documents, taxpayers paid nearly $92,000 for hospitality events hosted by Ms Purick between 2017 and 2019, including exclusive “private dinners” and other high society events.

These events had alcohol worked into the bill and are separate from the booze purchased for the Speaker’s office.

One invoice shows Ms Purick used taxpayer money to pay for an exclusive dinner of the Commonwealth Women Parliamentarians committee – a national group that promotes women in politics – at posh eatery Wharf One, that cost taxpayers $1,065 – of which $378 was for assorted drinks.

That dinner was followed by a catered luncheon for the same group the next day at Parliament House that cost taxpayers $820 – of which $280 was spent on wine.

Another internal document shows taxpayers forked out up to $2300 for a private “Speakers dinner party” for a party of seven in Madam Speaker’s quarters catered by Karen Sheldon Catering. It was never disclosed who attended.

Another invoice dated November 23, 2017 shows “Madam Speaker and the Clerk’s Christmas Party” for exclusive invitees and friends cost taxpayers $8,602. Other year’s Christmas parties were not included in the released invoices.

Ms Purick declined to explain the discrepancy or why taxpayers paid for a private non-profit organisation’s Christmas parties.

Questions sent to Somerville were not returned, but they did thank Ms Purick on their website for “her patronage of the event” in 2017, that also included choirs singing Christmas Carols in the private event at Parliament House.

Other documents show Ms Purick hosted various taxpayer-funded catered drinking sessions for her favourite community groups since 2016, including an undisclosed $4142 “book launch” on International Nurses Day, an $1800 reception for “Run with Dad” organisers, $2000 for a Sids and Kids event, another book launch that cost taxpayers $4684 called “Life in Radio Land”, annual events for Vietnam Veterans that cost a combined $12,000 for two years, a Rotary reception that cost $1600 and a politically exclusive $1800 catered lunch for politicians and their guests to celebrate the “launch of the Red Cross Handbook for Parliamentarians”.

Ms Purick also hosted a $2648 parliamentary event for volunteers of the Fred’s Pass Show – a group in which she acts as “patron”.

She also ran numerous exclusive parliamentary “opening day” receptions for politicians and guests, including one that cost taxpayers $2,627 last September.

A group called only “Young Engineers” was also treated to Ms Purick’s hospitality at taxpayers’ expense, with a cost of $2,000 for a two-hour event at the Speakers Green area of Parliament House. Members of a young United Nations group were also given a special, exclusive event at a cost of $1746.

It was unclear how Ms Purick chose which groups and events to host.

Ms Purick did not respond to questions about her office’s spending.