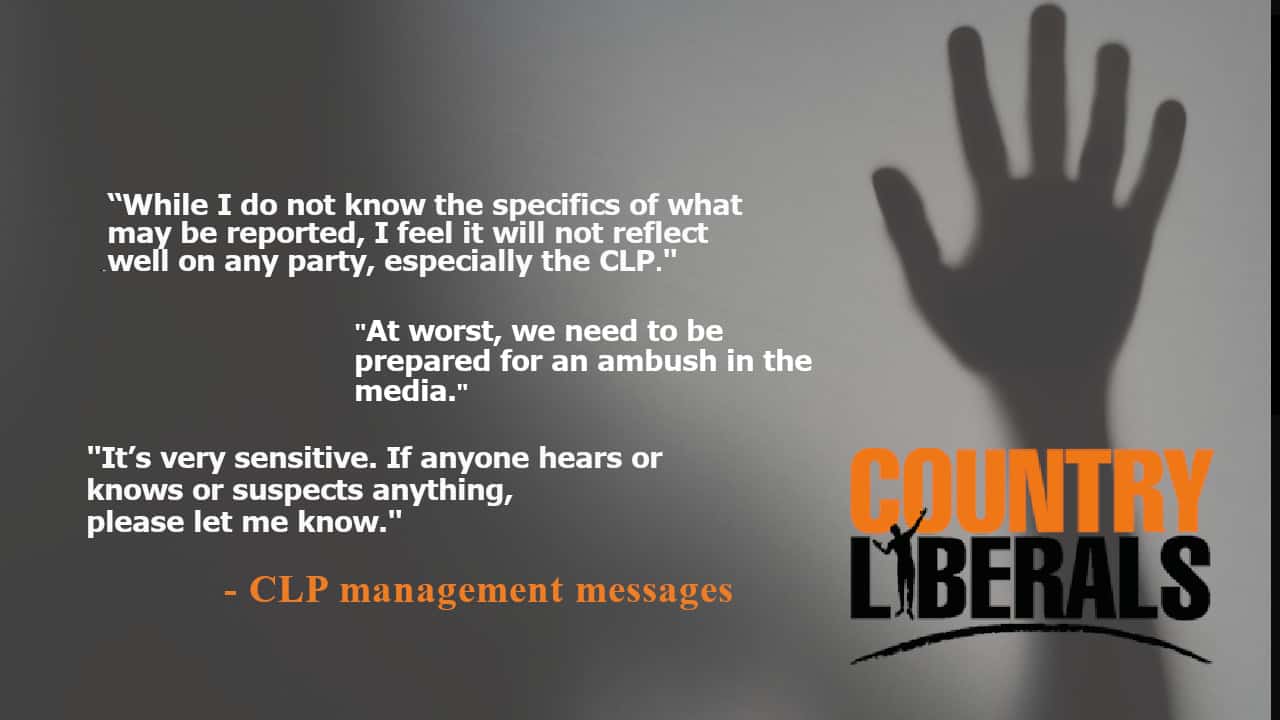 Senior Country Liberal Party management members are investigating the alleged assault of Senator Sam McMahon as domestic violence, and are also looking into who in the party knew about it and whether it was reported to police, internal party messages reveal.

The party raised concerns internally about Ms McMahon sharing a house with her chief of staff Jason Riley and another man, the messages show.

As first reported in the NT Independent, the CLP launched an investigation on Saturday after receiving more information about the physical assault allegations as well as other alleged “misconduct” in the Senator’s office.

It’s understood the investigation will look at two incidents of alleged assault as well as the “misconduct” allegation.

Messages between the CLP management team on Saturday, show the party was concerned about its own exposure and whether party members with knowledge of the situation followed legal requirements.

“If our Senator has been reported in a relationship with a staff member, and violence has been allegedly witnessed, we need to ensure that police have been involved because domestic violence has mandated reporting,” one senior management member wrote to others.

“If the Senator is, as alleged, residing domestically with a staff member, that is contrary to new rules that had been put in place as a result of the Barnaby Joyce affair – we need to know.”

However, the Barnaby Joyce rules around relationships with staffers only apply to federal ministers, not senators. There is currently no code of conduct for senators.

A photo of a bloodied Ms McMahon that was sent by her to an unidentified person through a messaging app in April, in which she alleged in the message that Mr Riley assaulted her, was taken at the Senator’s shared residence with Mr Riley in Darwin, it’s been confirmed.

A second incident of an alleged assault at the Senator’s office is also under investigation by the CLP.

Mr Riley did not respond to questions on Wednesday and previously declined the NT Independent’s request for comment.

Senator McMahon initially denied the assault allegations, but her office issued a statement Tuesday night asking for privacy after the photo was shared with another media outlet.

“These allegations are a personal matter and they are being addressed privately,” the statement said. “The Senator requests the media respects her privacy.”

But sources in the party aren’t sure it is a private matter, given the public money involved in paying Mr Riley and the Senator and the location of the alleged assaults.

The CLP management team’s messages also show the party is in the process of obtaining statutory declarations from all members with knowledge of the alleged assaults “either verbal or physical”, including from one staffer who is on administrative leave and another who has had their working arrangements changed.

The party also sought advice from the federal Parliament, which the NT Independent understands is also investigating the matter.

The Department of Finance was given a complaint alleging misconduct in the Senator’s office last week but it remains unclear what precisely that complaint relates to.

The messages between party management show the party was concerned about the situation becoming public.

“While I do not know the specifics of what may be reported, I feel it will not reflect well on any party, especially the CLP,” a message from another senior member stated. “At worst, we need to be prepared for an ambush in the media.

“It’s very sensitive. If anyone hears or knows or suspects anything, please let me know.”

CLP president Ron Kelly did not respond to questions from the NT Independent on Wednesday, including when he and other senior members first became aware of issues with Ms McMahon and her staff.

He also did not respond to a question about whether police were informed of the alleged incident when it occurred or if the party has asked them to investigate now.

He said on Saturday that “the CLP does not condone violent or any other inappropriate domestic or workplace behaviours in any form”.

Ms McMahon split from her husband last September, contacting media at the time to let them know.

“There’s been some speculation in my personal life,” she said at the time.

“I am going through a marriage separation at the moment. It is a very difficult and stressful time for myself and my husband and I would just ask everyone to respect our privacy and work through these difficult matters.”

It remains unclear when she began sharing the house with Mr Riley, but it’s understood she has previously denied being in a relationship with him.