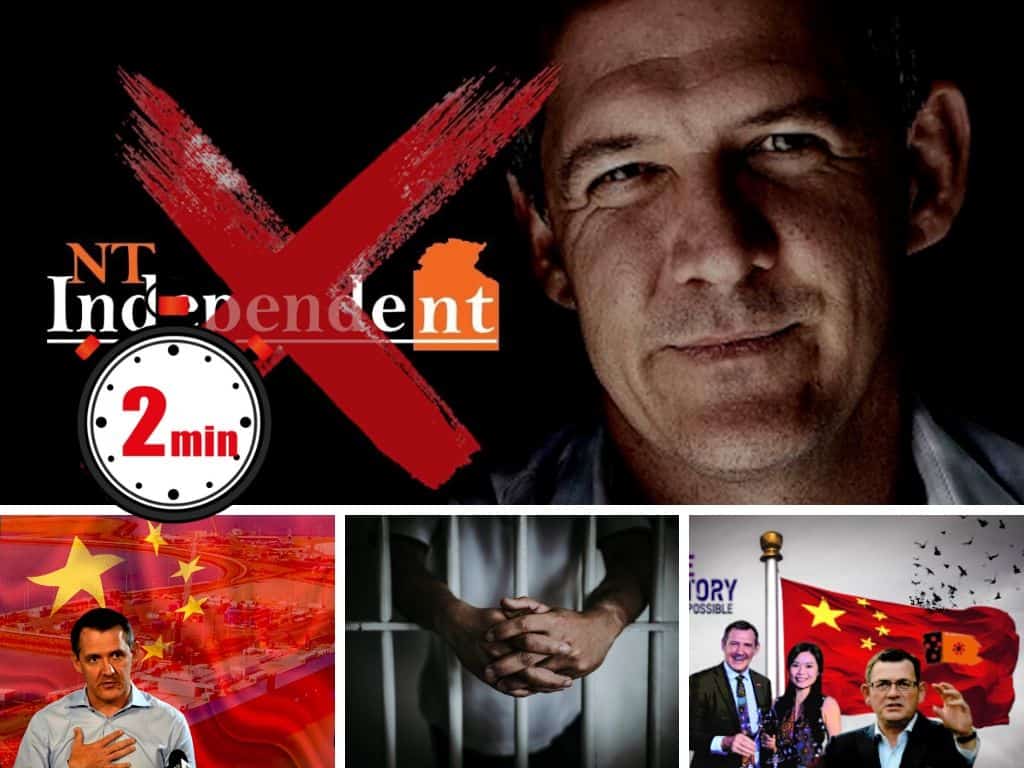 In case you’ve been hiding under a rock, here are some of the NT Independent’s most significant stories of the week: Chief Minister Michael Gunner signs a secret deal, then later in the week literally runs from NT Independent questions; Officer sacked over ‘offensive’ Yuendumu shooting T-shirts; Prisoners in Darwin Correctional Centre threatened staff that a serious riot which occurred last month is “just the start”; plus more.

Chief Minister Michael Gunner secretly signed an agreement with Chinese officials while on a trade mission to China late last year that his office has refused to explain, the NT Independent can reveal.

Photos obtained by the NT Independent taken at the “Reaching South” event in Shenzhen last October, show Mr Gunner signed a document with an unidentified Chinese official in a ceremony that until now was never disclosed.

The incident has raised concerns around Mr Gunner’s possible links to a Chinese Communist Party-affiliated front organisation and his deep connections to Victoria Premier Daniel Andrews’ office – that was recently found to have signed up to China’s controversial Belt and Road Initiative without notifying the Department of Foreign Affairs and Trade.

Opposition and crossbench MLAs have called on Chief Minister Michael Gunner to fully and publicly disclose the nature of his dealings with China in Parliament, after the NT Independent revealed he signed a secret agreement with unknown Chinese officials while on an official taxpayer-funded trip to Shenzhen last October.

Mr Gunner’s office continued to refuse to disclose the nature of that agreement on Wednesday, as well as the extent of Mr Gunner’s potential involvement with a Chinese Communist Party-aligned organisation called the Shenzhen Australia Association.

A 61-year-old police officer has been dismissed from the Northern Territory Police Force after printing singlets with an “offensive” reference to the fatal police shooting in Yuendumu late last year.

The officer had been suspended from duty without pay in April for “serious breaches of discipline pursuant to the Police Administration Act 1978”, according to NT Police.

A police statement in April said the officer was allegedly responsible for the production and distribution of clothing that displayed highly inappropriate content.

‘A very positive investment for the future of our country’: Gunner on Darwin Port deal to Chinese company

Chief Minister Michael Gunner has come under scrutiny over his connections to China, as old comments resurface about the 99-year lease of the Darwin Port and his involvement with the sale.

An NT Independent investigation revealed Mr Gunner secretly signed an agreement with Chinese officials while on a trade mission to Shenzhen last October that his office has refused to explain.

Shortly before Mr Gunner left for China last October, he told a reception in Darwin celebrating the 70th anniversary of the founding of the People’s Republic of China that China’s controversial Belt and Road Initiative could be “a win-win” for China and Australia.

He also said that the Darwin Port deal with Chinese-owned Landbridge was “a very positive investment for the future of our country”.

‘A new low for democracy’: Gunner changes venue to avoid questions from the NT Independent

The Gunner Government moved a press conference at the last minute Thursday morning, after learning the NT Independent’s journalists would attempt to ask questions of the Chief Minister.

The change of venue came after a media officer identified Independent editor Christopher Walsh shortly before the arranged time at Stokes Hill Wharf.

‘It’s a ticking timebomb’: Fears another prison riot is imminent

Prisoners in Darwin Correctional Centre have threatened staff that a serious riot which occurred last month is “just the start”, with fears it is only a matter of time before another serious incident occurs, a well placed Corrections source has said.

The Corrections source said staff at the facility were concerned another incident could happen at any time, with damage from the May 13 riot affecting some cells and making them easier to break out of.

The revelation comes as the NT Government announced on Friday it had appointed Professor John Paget to undertake an independent review of last month’s riot, which saw more than 20 inmates break out of their cells and set fire to buildings.