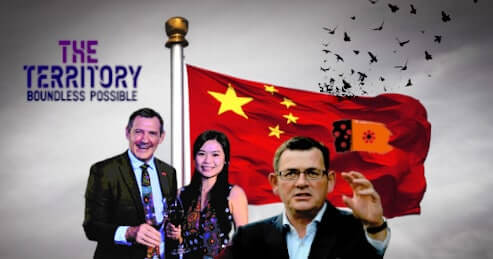 Chief Minister Michael Gunner secretly signed an agreement with Chinese officials while on a trade mission to China late last year that his office has refused to explain, the NT Independent can reveal.

Photos obtained by the NT Independent taken at the “Reaching South” event in Shenzhen last October, show Mr Gunner signed a document with an unidentified Chinese official in a ceremony that until now was never disclosed.

The incident has raised concerns around Mr Gunner’s possible links to a Chinese Communist Party-affiliated front organisation and his deep connections to Victoria Premier Daniel Andrews’ office – that was recently found to have signed up to China’s controversial Belt and Road Initiative without notifying the Department of Foreign Affairs and Trade.

The document Mr Gunner signed is said to be a “provincial agreement” with Shenzhen city officials – according to a source – which a leading Chinese international policy expert has raised concerns over, citing China’s sophisticated influence network in Australia and the NT Government’s ongoing secrecy about its dealings in China.

Business, political and education officials the NT Independent spoke with, who were on the trade mission to Shenzhen, said they were unaware of the signing or the nature of the document.

“Territorians should be concerned about a secret agreement which can be detrimental to public interests,” said Chongyi Feng, associate professor of China studies with the University of Technology Sydney.

“Transparency is the key. Chinese (organisations) conduct their business through covert operations.”

The Chief Minister’s office declined to answer questions about the signing of the document and the trip overall, including the extent of Mr Gunner’s business dealings with a Chinese Communist Party-linked group called the Shenzhen Australia Association.

One of Mr Andrews’ senior advisors was identified in 2018 as acting as a “special consultant” with the Shenzhen Australia Association – a recognised entity with links to the Chinese Communist Party’s United Front that aims to further Chinese interests in Australia.

While the extent Mr Gunner’s dealings with the Shenzhen Australia Association remain unclear, he has focused all of his efforts while in office on securing exclusive trade deals with that particular Chinese city, including paying China-based Donghai Airlines an undisclosed sum in 2018 to provide direct flights between Darwin and Shenzhen.

Mr Andrews’ staff also organised a private $5000-a-plate fundraising dinner last December in Melbourne for Mr Gunner, just over a month after the Shenzhen trip, with the names of those who attended and donated kept secret.

“Friendship with China”: Victoria Premier Daniel Andrews called on all states and territories to sign up to BRI

Michael Gunner’s trip to Shenzhen last October overlapped Mr Andrews’ trip to Beijing to further a previous Memorandum of Understanding from 2018 that saw Victoria signed on to the Belt and Road Initiative.

Mr Andrews’ decision to sign the BRI, against Federal Government advice and without notifying the Department of Foreign Affairs and Trade (DFAT) has recently been highly criticized, with the Federal Government questioning whether Mr Andrews’ deal with China is in the national interest. Chief among the concerns by critics has been China’s so-called “debt trap diplomacy” with neighbouring Pacific nations.

Mr Andrews defended the deal, which he said would create jobs for Victorians, while encouraging all states and territories to follow his lead.

The BRI deal will see a number of areas of co-operation between the Victorian Government and Chinese companies, including Victoria’s massive $107 billion infrastructure spend, collaboration in high-end manufacturing, biotech and agriculture technology.

Premier Andrews also said the agreement would give Victorian firms “inside running” on infrastructure projects in China and BRI projects around the world.

The deal was questioned by critics, as well as the Federal Government, who accused Mr Andrews of blatantly disregarding Australia’s foreign policy, and by some academics who suggested he had been “co-opted” and fooled by Chinese operatives.

It was reported that DFAT was not made aware of the BRI deal until the day it was signed.

Mr Andrews’ office defended the deal citing the economic benefits for Victoria. His office also defended senior advisor Marty Mei’s links to the Shenzhen Australia Association and other CCP-linked groups, stating that he is “a valued member of the team and working hard to grow jobs right across Victoria”.

The Shenzhen Australia Association was established in 2016, with strong backing from Chinese authorities to promote stronger business ties between Shenzhen – China’s “silicon valley” – and Australia.

In 2018, Mr Gunner signed a deal with China-based Donghai Airlines to provide direct flights between Darwin and Shenzhen, the costs of which have never been disclosed. It’s unclear if the association played any role in Mr Gunner’s decision to work exclusively with that city.

“The Chinese Communist Party have a very extensive United Front network in Australia,” he said. “This kind of organization (Shenzhen Australia Association) is a part of that network.

“In China, all officially registered social organisations, mass organisations, are subsidiary front organisations of the CCP. The CCP has now exported that model to foreign countries and extended its control over civil society organisations in the overseas Chinese community. As a consequence, these Chinese associations have carried out CCP political tasks in host societies.”

Prof Feng said while it’s unclear exactly what Mr Gunner signed, it is a typical tactic of the Chinese Government to offer “friendship agreements” and to use flattery and offer special treatment for Australian politicians to further their own agenda.

The secrecy over Mr Gunner’s signing of the agreement is typical of how Chinese state officials conduct their business, Prof Feng added.

“The United Front operation is by nature (about) secret activities, covert activities,” he said.

A photo of Mr Gunner, which appears to be taken after the signing of the agreement with the Chinese official, shows only NT public servants and Chinese officials were present, including Department of Business CEO Shaun Drabsch.

The City of Darwin, Charles Darwin University and other business attendees on the trade mission said they were not aware of the signing.

Other photos from the trip, which originally appeared on a Chinese government website, show “One Belt One Road” material on tables, with an NT Government “Boundless Possible” logo imposed on the pictures.

No mention of agreement being signed in any official statements

A press release issued by Mr Gunner’s office at the time of the event stated the trip to Shenzhen City, Guangdong Province would provide access to “key business leaders and decision-makers in the region” for the trade delegation that included high-profile local business leaders, CDU vice chancellor Simon Maddocks, Darwin Mayor Kon Vatskalis and dozens of public servants.

The statement dated October 23, 2019, further declared that Mr Gunner and Resources Minister Paul Kirby would be meeting with “key government, business and industry partners” in China with Austrade and “members from the energy sector”.

The only formal mention by the NT Government of the October Shenzhen trip after it was completed was made in a press release from Mr Gunner’s office dated October 31, 2019.

The statement did not mention the Chief Minister’s signing with the unnamed Chinese official.

The photos obtained by the NT Independent appear to back up that the investment deal was signed between the companies, although it remains unclear if it went ahead as planned.

ENN Ecological Holdings ran into foreign investment issues in a scrapped deal to assume control of a gas field in the United States last year.

The Foreign Investment Review Board told the NT Independent they do not comment on the “application of the foreign investment screening arrangements as they apply or could apply to particular cases”.

Mr Gunner has thrown his support behind the Kittyhawk LNG project, citing it as critical for creating jobs and the future of the Territory economy as it turns towards manufacturing.

Gunner says Belt and Road Initiative is “win-win” for China and the NT; Darwin Port lease to Chinese company a “very positive investment for the future of this country”

The Chief Minister’s office would also not say whether Mr Gunner supports Mr Andrews’ involvement with the Belt and Road Initiative or if Mr Gunner is considering signing the Northern Territory on to the controversial program.

However, a week before the trade trip to Shenzhen, Mr Gunner told a reception in Darwin celebrating the 70thanniversary of the founding of the People’s Republic of China that the Belt and Road Initiative could be “a win-win” for China and Australia.

Despite public comments that he was against the sale of the Darwin Port, Mr Gunner was on the committee that recommended it and did not produce a dissenting report.

He told the reception organised by the Chinese Embassy in Australia that the Darwin Port deal with Chinese-owned Landbridge was “a very positive investment for the future of our country”.

“We need the port to grow to suit the things that we’re gonna be exporting,” he is quoted as saying on numerous Chinese news sites.

“It’s both an Australian government win and a Chinese government win. So, I think it’s a positive sign of what you can achieve if you work together as a commercial port doing commercial things.”

The comments echo similar remarks Mr Gunner made to Chinese state media during another trip to Shenzhen in 2018.

It was revealed that Mr Gunner threw out a hard copy of the organisational report because it “wasn’t important”, and which only came to light after the ABC filed a Freedom of Information application to access the document.

Mr Gunner stated last month that “it was a word document with some notes with a draft (organisational) chart” that was handed to him by Ms Ratcliff at a COAG meeting last August.

He said he had personally commissioned the report from Ms Ratcliff in a private transaction, which involved flights and hotel accommodation that he paid for.

“Soon after she came up (to the NT), she obviously went away and had a little think about it, put some thoughts down on paper and then I was at a COAG meeting and she just handed it to me,” Mr Gunner said.

A month after the Shenzhen trip, Mr Andrews held a $5000-a-plate fundraiser for Mr Gunner in Melbourne that drew criticism due to Mr Gunner’s office first refusing to state what the event was and then later refusing to disclose who attended and donated to his re-election fund.

It was billed in Melbourne as an “exclusive leaders’ dinner” with the chance to “hear directly about the Northern Territory’s policy direction.”

It remains unclear who attended the fundraiser. The NT Labor party said it would file donation disclosures from the event in accordance with Territory electoral requirements.

According to those disclosures, the NT ALP raised far and away more donations than the CLP or Territory Alliance combined, raking in $186,000 between July 1, 2019 and March 31, 2020. The disclosures did not specify what money was raised at the Melbourne fundraiser.