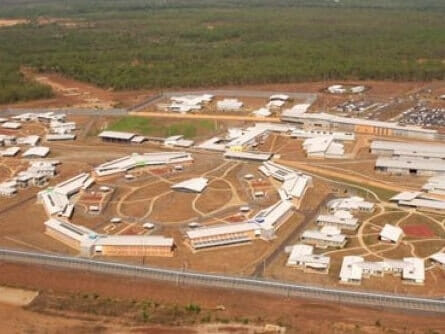 Mr McNairn said he was alerted to the “serious disturbance” at 8.40pm. The prisoners broke out of low security accommodation and set fire to buildings while ascending onto roofs, with around 90 off duty staff called into the facility to assist 16 on-duty guards to contain the incident.

Authorities have not said how the prisoners managed to escape their cells and climb the prison walls with correctional staff on duty. Nor was it disclosed how and where these prisoners were finally subdued.

Law enforcement units were immediately deployed to monitor the perimeter at the jail, while corrections officers dealt with the incident inside the prison grounds.

Northern Territory Fire and Rescue Service also responded to the jailbreak to deal with the fire that was reported around 9:30pm. No reports yet how the fire started or details of the damage the fire caused.

“We started negotiating with some prisoners and then we managed to secure the area and bring the incident to a successful end, there was no loss of life and no injuries to staff,” Mr McNairn said.

Mr McNairn said two prisoners sustained minor injuries and he was ‘not sure why the incident occurred’.  By around 1:30am, the 21 prisoners were back in their cells.

Justice Minister Natasha Fyles said an inquiry would take place to determine how the riot started.

“This is a very serious incident … and it’s going to be thoroughly investigated,” she said.

“There is significant damage … we’re now looking at, in terms of the repairs, who pays for that.

“This is unacceptable, this prisoners will face the full consequences of the law.”

Minister Fyles said the cost of the damage and who is responsible for paying for the bill would be assessed.

She said the NT Police are now in the process of investigating the jailbreak and will be laying charges to those found accountable.

“It doesn’t matter that this took place in a prison, they will still be held to account for this behaviour and the damage that has been done,” Ms Fyles said.

Darwin Correctional Centre will remain in lockdown for three days as a result of the incident and court matters have either been adjourned or had to proceed without prisoners appearing in court via video link, according to Chief Judge Elizabeth Morris.

“They still have police doing investigations and forensic teams there,” she said.