‘A very positive investment for the future of our country’: Gunner on Darwin Port deal to Chinese company 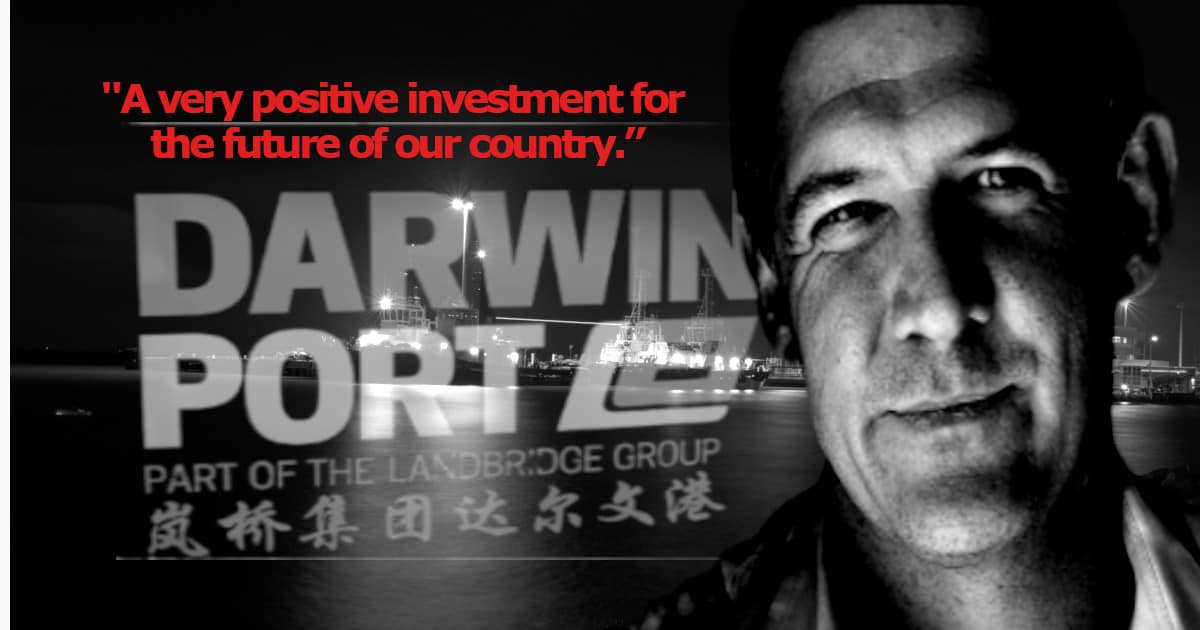 Chief Minister Michael Gunner has come under scrutiny over his connections to China, as old comments resurface about the 99-year lease of the Darwin Port and his involvement with the sale.

An NT Independent investigation revealed Mr Gunner secretly signed an agreement with Chinese officials while on a trade mission to Shenzhen last October that his office has refused to explain.

Shortly before Mr Gunner left for China last October, he told a reception in Darwin celebrating the 70th anniversary of the founding of the People’s Republic of China that China’s controversial Belt and Road Initiative could be “a win-win” for China and Australia.

He also said that the Darwin Port deal with Chinese-owned Landbridge was “a very positive investment for the future of our country”.

“We need the port to grow to suit the things that we’re gonna be exporting,” he is quoted as saying on numerous Chinese news sites.

“It’s both an Australian government win and a Chinese government win. So, I think it’s a positive sign of what you can achieve if you work together as a commercial port doing commercial things.”

The comments echo similar remarks Mr Gunner made to Chinese state media during another trip to Shenzhen in 2018.

Despite public comments that he was against the sale of the Darwin Port, Mr Gunner was on the committee that recommended it and did not produce a dissenting report.

Darwin is regularly mentioned in reports of Chinese influence in Australia, after the previous Adam Giles-led CLP government leased the port to Chinese company Landbridge for 99 years, in a $506 million deal labeled by some military experts as “treacherous”.

The Darwin Port was raised on a national stage again last month, when some federal Members of Parliament suggested the prospect of buying the Port back from Chinese company Landbridge in retaliation for trade tariffs imposed by the economic superpower on Australia.

Mr Gunner, who was on the committee that recommended the sale of the Port in 2015 but maintains he was against the lease, said he would not buy it back and recommended Prime Minister Scott Morrison not pursue a buy back either.

“If I’ve got $500 million of taxpayers’ money to play with, I’d spend it on things that will create jobs for Territorians.

“My advice for the Prime Minister, if he’s going to go down that path is, don’t buy back the port, invest in things that will grow jobs for the Territory.”

Mr Gunner’s office has refused to release details about the agreement signed with Chinese officials last October while on a trade mission to Shenzhen. They also would not say what Mr Gunner’s official position on the BRI is.

The incident has also raised concerns over Mr Gunner’s possible links to a Chinese Communist Party-aligned group called the Shenzhen Australia Association. It was previously revealed that a current senior advisor to Victoria Premier Daniel Andrews is connected to the group.

It’s also brought Mr Gunner’s connections to Mr Andrews’ office back into the spotlight. Mr Andrews controversially signed Victoria on to the Belt and Road Initiative late last year without notifying the Department of Foreign Affairs and Trade.

Mr Gunner had Mr Andrews’ chief of staff reorganize his office two months before his Shenzhen trip and then said he threw the report out. A fundraising dinner for Mr Gunner was organised by Mr Andrews’ office a month after the Shenzhen trip.

Professor Chongyi Feng, a leading expert on Chinese foreign policy, told the NT Independent that the secret nature of the agreement Mr Gunner signed in Shenzhen is concerning.

“Territorians should be concerned about a secret agreement which can be detrimental to public interests,” he said.