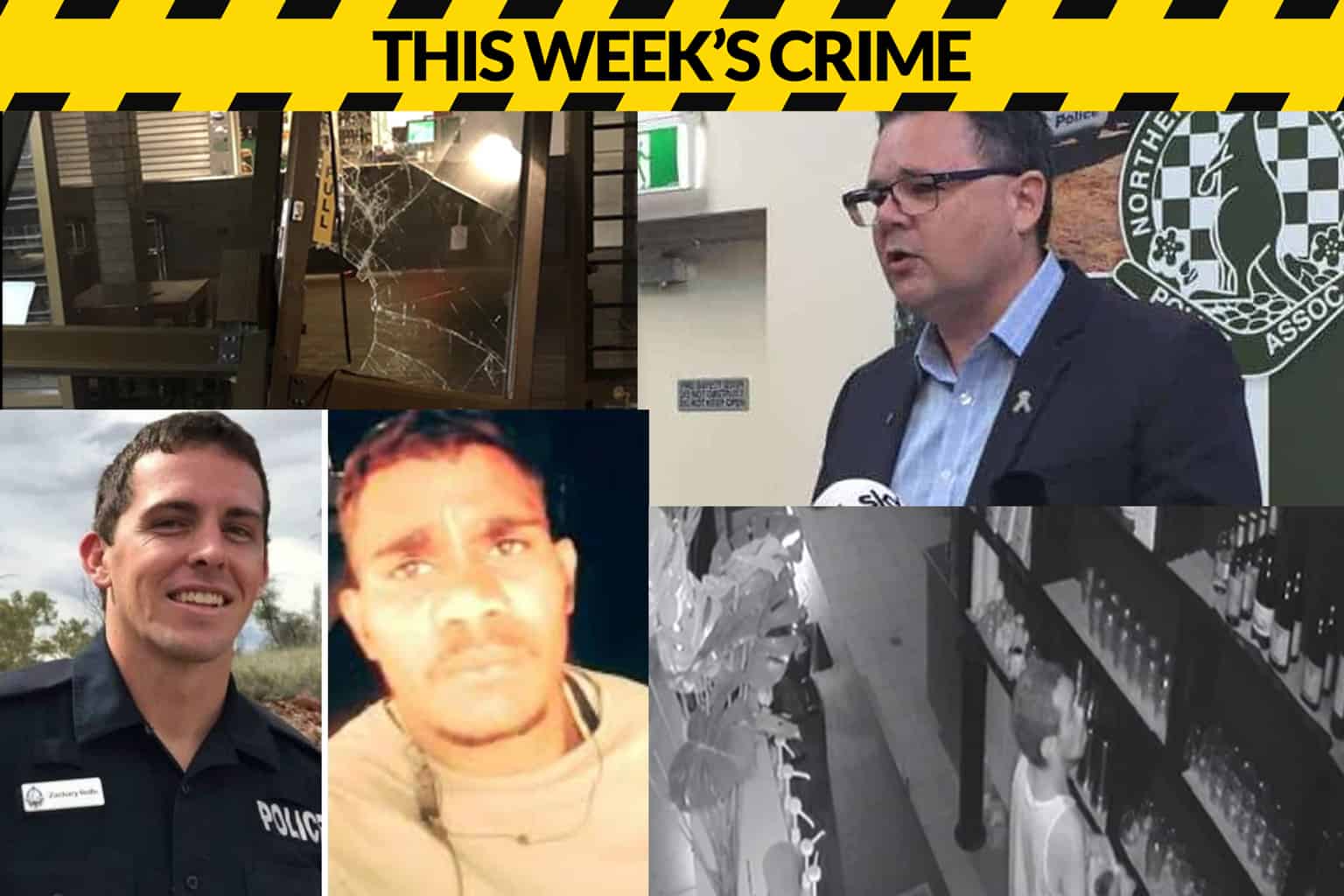 From the growing attrition rate in the NT police force, to the hours-long Darwin CBD standoff between police and a man evading arrest, to Zachary Rolfe standing trial in the NT Supreme Court, to smashed doors and grog looting in Parap and Darwin, and to a woman arrested for stabbing a woman and biting a man on his groin. This is what the NT Independent reported on in cops, crimes, and court over the past week.

Aerial and land searches have been deployed to locate three men who have been missing for three days in a remote area in Arnhem Land, NT Police said.

NT Police said Aboriginal rangers and police in aircraft and on motorbikes are searching for the trio who were last seen on Wednesday at 6:00am near ‘Dreaming Lady Crossing’, halfway between the communities of Gunbalanya and Maningrida, more than 300kms east of Darwin.

Police are investigating the death of an 11-year-old boy in West Arnhem Land with detectives from the Darwin Crime Division being sent to lead the investigation, police said.

NT Police media manager Rob Cross said the detectives have travelled to the remote community of Gunbalanya in West Arnhem, around 300kms from Darwin, to lead the investigation.

A 30-year-old man who engaged the NT Police in a five-hour standoff from the ledge of a Darwin CBD hotel on Thursday afternoon that saw him allegedly throw bottles at officers is now facing 18 charges over the incident, including assaulting police and depriving a person of personal liberty.

NT Police said they attended the Luma Luma hotel complex to speak with a woman in relation to an alleged assault that occurred earlier in the week when they encountered the 30-year-old man at her accommodation.

A Parap cafe was raided in the wee hours of Friday by an unidentified man who smashed the glass front doors and took his time browsing the grog selection before stuffing his bag with more than 10 bottles.

Fresh Point Co. Cafe Parap in Salonika Street posted a CCTV image on their social media page captured at 2:45am inside their business where a man is seen picking up alcohol off their liquor rack.

A 19-year-old has been sentenced to three years in jail after pleading guilty to a “particularly galling” crime spree involving a police pursuit, more than $100,000 worth of stolen cars and countless business owners left covering the costs.

The male pleaded guilty to 15 charges in the Northern Territory Supreme Court in Darwin for a string of offences that took place earlier in the year.

An hours-long standoff between police and a man on the ledge of a CBD building who allegedly pelted cops with bottles ended Thursday afternoon after the Armed Tactical Response Unit took him into custody with the aid of a cherry-picker.

The man, who was allegedly wanted for a domestic violence offence was reportedly chased by police officers in the CBD before entering the Luma Luma Hotel on the corner of Knuckey and Wood Streets to evade arrest where he remained crouched on a first storey ledge for hours.

Mr McCue said if the attrition continued at that rate for the next six months, the force was going to be in “a huge hole.”

A Darwin local football club has been left shocked and devastated after discovering their club was raided overnight with the rear door smashed and liquor stolen.

St. Mary’s Football Club representatives took to social media to vent their frustration over the incident while appealing to the public to help them find the offenders.

A 33-year-old quarantine detainee has been fined more than $5000 after she was caught attempting to scale a perimeter fence at the Howard Springs quarantine facility on Wednesday, NT Police say.

A 57-year-old man was also issued an infringement notice for not being in his unit when meals were being served. Police said he was later located not wearing a mask and grew aggressive when approached by staff.

Driver killed as car rolls and smashes into trees

A 51-year-old man has been killed in a single vehicle rollover after his 4WD smashed into trees Wednesday night in East Arnhem Land, NT Police said.

NT media manager Rob Cross said the man was traversing Bodiya Road in Milingimbi around 10pm when his car rolled and crashed in the trees.

Driver killed as car rolls and smashes into trees

An Uber driver was allegedly robbed Tuesday night in Parap by a man who put his arms around the driver and claimed he had a knife, NT Police say.

NT Police Watch Commander Len Turner said that around 8:30pm, the Uber driver was sitting in his vehicle when a Caucasian male entered his car asking for help because someone was chasing him and asked to be taken to the police station.

Police call for criminals to be more honest

An Alice Springs man has allegedly called triple-0 to get police to arrest him after he allegedly stole a ute from a charity and was involved in a police chase, later dumping the vehicle near Santa Teresa, NT Police have said.

Police call for criminals to be more honest

A 28-year-old Darwin man will spend 12 months in jail after a joint anti-child exploitation task force seized his laptop that had a combined 163 child abuse videos and images on it.

Jaymie Pierce pleaded guilty in the Northern Territory Supreme Court in Darwin to one count of possession of child abuse material, despite an initial attempt to lead authorities astray.

A woman in Wagaman has been arrested after she allegedly stabbed a woman, bit a man on his groin, and threw hot water on another man, NT Police said.

Northern Territory Police Watch Commander Len Turner told the ABC Radio Darwin on Tuesday morning that around midnight at the Wagaman house they found woman had been stabbed, a man had been bitten on the groin, and another man had had hot water thrown on him in alleged acts of domestic violence.

Chief Minister Michael Gunner said he expects the Federal Government will defund remote policing in disadvantaged Indigenous communities within two years and flagged the funding shortfall may fall on the Northern Territory.

Despite widespread concerns the cuts could put significant strain on a force already stretched thin, Mr Gunner told ABC Darwin radio this morning the funding cuts was discussed with Prime Minister Scott Morrison during his trip to Sydney earlier this month.

NT Police officer Zachary Rolfe will stand trial in the NT Supreme Court in Alice Springs charged with murder over the fatal shooting of Yuendumu teenager Kumanjayi Walker, after a long drawn out committal hearing that a judge found produced sufficient evidence to warrant a trial.

Mr Rolfe appeared on Monday by audio link to hear the judge’s final decision on whether there was enough evidence to commit him to stand trial.

Northern Territory Police has called off the search for Victorian tourist Daymon Ness at Nitmiluk National Park but say his case is still open.

Mr Ness, aged 30, failed to return from a walk in Nitmiluk National Park near Katherine on Tuesday October 20, sparking an extensive air and land search.