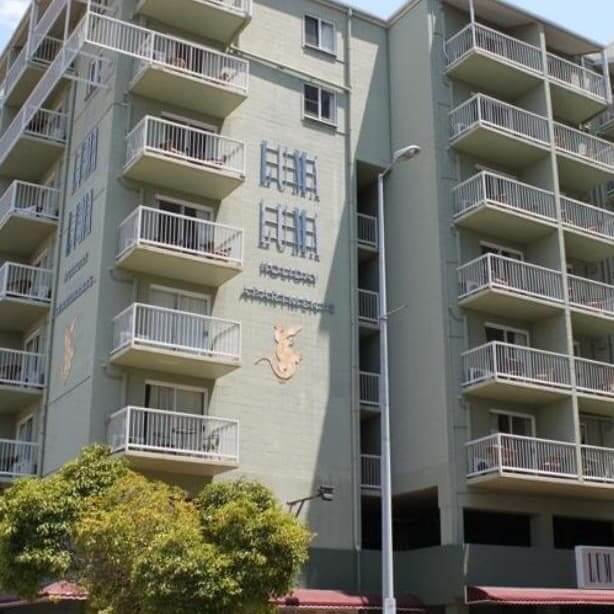 An hours-long standoff between police and a man on the ledge of a CBD building who allegedly pelted cops with bottles ended Thursday afternoon after the Armed Tactical Response Unit took him into custody with the aid of a cherry-picker.

The man, who was allegedly wanted for a domestic violence offence was reportedly chased by police officers in the CBD before entering the Luma Luma Hotel on the corner of Knuckey and Wood Streets to evade arrest where he remained crouched on a first storey ledge for hours.

The hours-long standoff caused the streets to be blocked off.

NT Police incident controller Sergeant Wayne O’Neill told the ABC the man was carrying a backpack full of bottles, which he then turned into projectile weapons, allegedly striking and injuring a police officer.

The man was seen jumping across balconies and on the ledge and witnesses said he was screaming profanities at the police and throwing bottles and cans at them.

Sgt O’Neill said one of the bottles thrown by the man hit a police dog handler in the head, leaving him with an abrasion that required medical attention.

St John Ambulance provided first aid to the officer, and he was later taken to the Royal Darwin Hospital for treatment.

Sgt O’Neill said the alleged offender had been wanted by police and they were looking to speak to him as a person of interest in a domestic violence offense and other alleged offense.

“We had a person of interest who was identified yesterday in relation to a domestic situation,” he told ABC.

“Police found him in this [hotel] and identified him, after which he started to climb across all the balconies …”

Sgt O’Neill did not provide detail on the specifics of the domestic violence offense that the man was allegedly involved in.

NT Police’s Armed Tactical Response Unit and Firefighters were all at the scene to arrest the man.

Firefighters placed a ladder underneath the ledge where the man had based himself, but officers were unable to reach him as the man pushed it over.

By late afternoon, police used a cherry picker to retrieve and arrest him from the ledge.

NT Police had still not provided an official statement on the matter by midnight Thursday.