Tony Innes has spent the past two years fighting bureaucratic red tape and the government’s “double standards” to keep an iconic rodeo afloat, while government-owned facilities are not being held to the same level of compliance as private businesses, he says.

Mr Innes has asked the Planning Minister why TIO stadium has continued to operate without a certificate of occupancy for almost 30 years, while he has been forced to retrospectively comply with the building code.

Mr Innes says he has forked out more than $50,000 upgrading the Noonamah Rodeo to bring it to Australian Building Standards since 2011, but that the government’s different processes for private and public facilities would deter most people from pursuing new business opportunities here.

In a recent letter to Planning Minister Eva Lawler, Mr Innes questioned why TIO Stadium can continue to operate without a proper occupancy permit, and how compliance enforcement varies for private businesses and government-owned properties.

He did not get a direct answer.

“The department investigates allegations of unapproved building works in building control areas within the Northern Territory and works with all property owners to ensure the relevant planning and building compliance is obtained,” said executive director of Land Services Mark Meldrum.

“I am aware you have continued to operate your business since you were first advised of the planning and building non-compliance matters at the rodeo complex and the Department has been working with you to obtain the necessary approvals.”

For Mr Innes, a condition that stairs leading to the VIP section needed to be backed or filled-in was the final stroke, following a visit to Darwin’s TIO stadium, where he saw sets of un-backed stairs not dissimilar to his.

“The backs of every stair tread on our upper VIP structure have to be filled in to meet Australian standards and yet TIO Stadium has steel staircases exactly the same as mine but are allowed to continue to operate,” Mr Innes said.

“I don’t think either are unsafe, but I find it difficult to understand why the NT Government is coming down hard on the private sector while government owned operations can run void of scrutiny.” 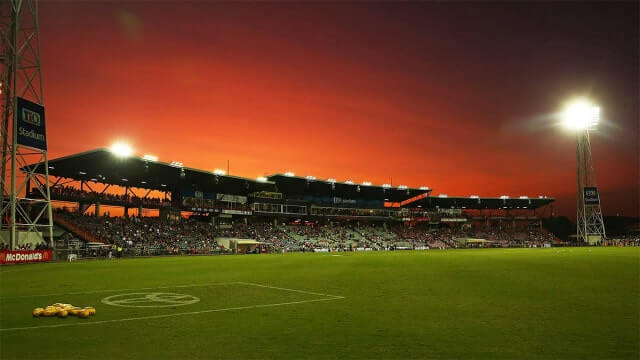 The NT Government has admitted TIO Stadium does not have a proper occupancy permit, yet allowed AFL games scheduled in August to go ahead.

The TIO Stadium has been operating without occupancy permits or required certificates since it was built in 1991.

NT Government documents, obtained by the NT Independent in August, revealed the Building Advisory Board deemed the stadium “unlawful” in 2009, yet matches were allowed to proceed as bureaucrats put off rectifying certification concerns.

The exposure forced the Department of Infrastructure, Planning and Logistics to issue a public statement on August 20 claiming that TIO Stadium was “safe”, and that two games including the Dreamtime game between Essendon and Richmond would go ahead without a proper occupancy permit.

The government only recently awarded a contract to a local building certifier to retroactively certify the stadium – 11 years after they first became aware of the non-compliance issues. It remains unclear what outstanding issues may be found during the process.

‘This is why big business has turned its nose at working in the NT’: Innes

Mr Innes admitted that as the Noonamah rodeo event grew quickly and infrastructure was added, the required building permits were not obtained, resulting in no certificate of occupancy – which according to the NT Building Act means people cannot occupy a building until a certificate is issued declaring it “fit for occupation”.

But from the day the NT Government stepped in with its myriad conditions, he says he has been working tirelessly, jumping through hoops to get the required documents to keep the rodeo alive.

“If someone came along and wanted to set up a rodeo in the NT, they would send themselves broke before they started,” Mr Innes said.

“The NT Government has not made it easy… this is why big business has turned its nose at working in the NT.”

Over the past two years, Mr Innes has been required to paint structures, engage hydraulic engineers to report on toilet facilities, install tactile indicators for the vision impaired, establish deep footings to low to the ground structures weighing almost two tonnes in the case of earthquakes, and upgrade staircases, just to list a few.

He was also asked to establish a water feed costing $20,000 for fire fighting, and change the zoning permits. 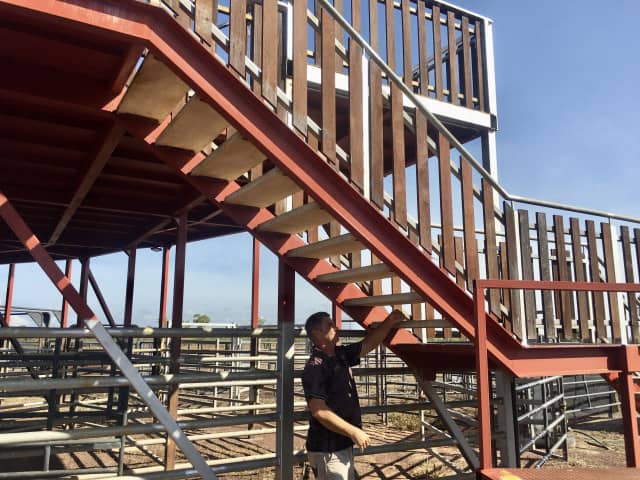 Tony Innes has been told he needs to place backing on stairs to ensure the safety of people with visual disabilities, yet the TIO Stadium does not have to comply with the same rules.

“It has taken so long for everything to get done. The [government] departments don’t talk to each other and don’t want to help you get to the next step.”

He said the costs “kept blowing out”, and a lag in the government’s response meant he was required to obtain exemptions to run events in 2019 while he worked on getting the right building permits.

“If COVID-19 hadn’t happened this year, I would have needed more exemptions because the government is so slow to get things moving.

“I simply cannot afford to keep spending money on this project, especially when government-owned structures are allowed to do as they please without consequence.

“We have always run on a tight budget and any profits have always gone back into improvements.”

TIO Stadium is not the only facility in the NT operating in the face of controversy and allegedly without compulsory permits.

A formal complaint was filed with government authorities in the days leading up to the Darwin Cup alleging the Darwin Turf Club’s recently constructed Silks Club was “unsafe and not suitable to occupy”.

Eight non-compliance issues had been raised, including insufficient structural design for a building holding more than 300 people; no fire sprinkler system in contravention of code and improper space for emergency exits to “enable safe evacuation” in the case of a fire or other emergency.

Rather than a formal government response, a government letter written by Mark Meldrum stated the matter had been “investigated” and dismissed 48 hours after the complaint was filed.

Allegations of non-compliance with the Turf Club’s grandstand were also raised in July, with focus on the staircases being built with transparent risers, similar to Mr Innes’ issue that he was forced to rectify.

The Turf Club has rejected claims its new pub and grandstand are non-compliant.

Mr Innes says he isn’t looking for special treatment, but the NT Government’s “double standards” are cause for concern and frustration.

“Either we all have to comply to the rules or the Territory is going to lose more business,” he said.

“I have not covered operational costs since 2016, let alone the extra capital expenditure which have amounted to over $50,000 on compliance issues, yet half the Territory doesn’t comply with certain areas of the building code.

“I just want to know why a small business is being scrutinised so severely with compliance and yet government-owned structures are allowed to operate freely without compliance.”

The NT Independent contacted Infrastructure Minister Eva Lawler with questions of how TIO Stadium can continue to operate without the correct compliance, but did not receive a reply.