‘This should have been stopped’: Darwin Turf Club’s grandstand safety concerns raised 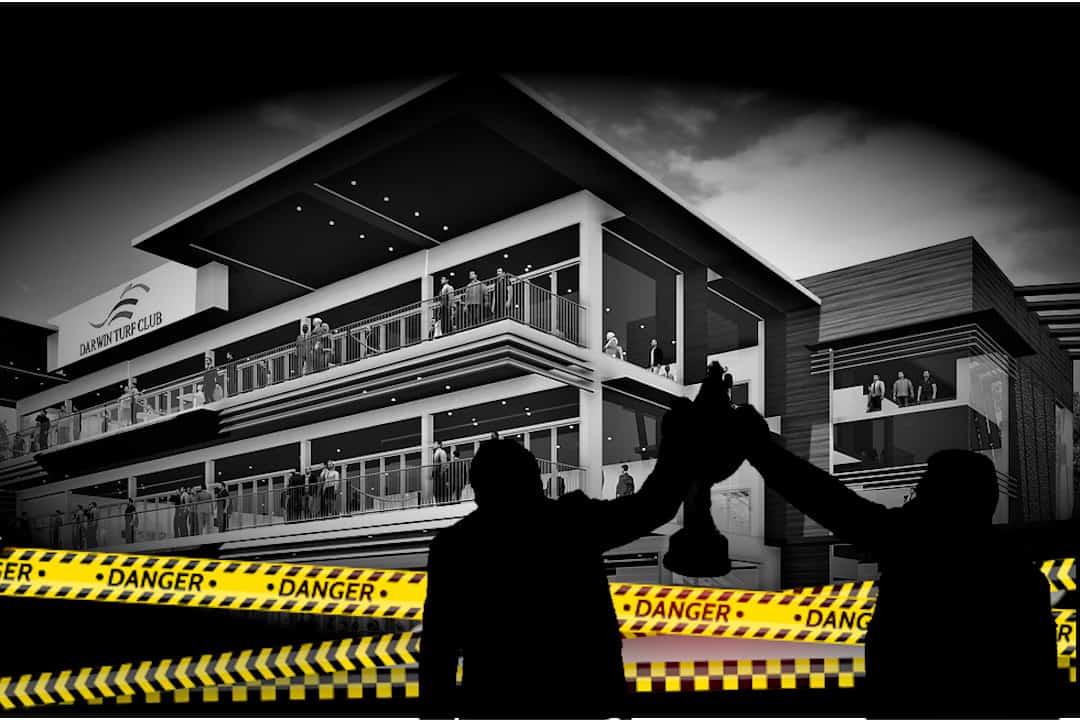 A day after serious allegations were levelled at the Darwin Turf Club for alleged building non-compliance issues with its Silk’s Club bar, new documents have surfaced that raise questions about the safety of the controversial $12 million publicly-funded grandstand.

The NT Independent has obtained a memo from the whistleblower behind the formal complaint to authorities over the safety concerns at the Silk’s Club, as well as internal Turf Club documents, that raise concerns around six alleged non-compliance issues involving the grandstand.

Those issues include the “importance level” granted to the grandstand building for structural purposes, stairways being constructed with transparent risers, stairways built with steel that is less than industry-standard 6mm thickness, longer than standard distances to exit the building and emergency exits that do not comply with the “deemed to satisfy” standards found in the Building Code of Australia (BCA).

There were also concerns raised about a fire engineering report that permitted the omission of a smoke exhaust system in the building and also permitted an internal “non-fire-isolated” stairway and exit that was ultimately “deemed to satisfy” through what are commonly known as “performance solutions”. 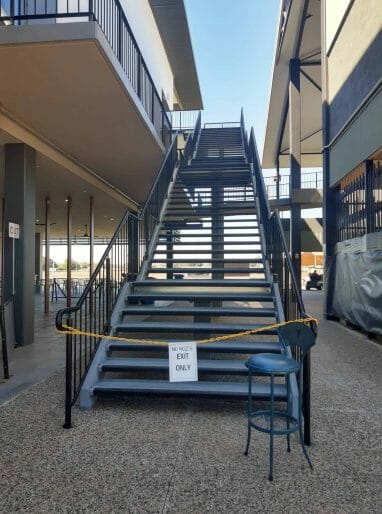 The closed off Darwin Turf Club grandstand stairs with transparent risers on Friday.

One of the whistleblower documents suggests that because the builder connected the grandstand to the existing Ted Bailey stand with a foot bridge – without any apparent fire resistant mechanisms in place – the two buildings should now be considered a single building which would leave the Ted Bailey centre “unsafe and not suitable to occupy”.

Other concerns have been raised that the bridge could also impede firefighting efforts in the event of a fire.

The Turf Club was controversially awarded $12 million of taxpayer money to construct the grandstand by the Gunner Government last year, with the contract awarded to Jaytex Constructions.

The grandstand opened last month and is expected to attract thousands of intoxicated patrons this weekend as part of Darwin Cup festivities, which the whistleblower states could lead to “health and safety” risks “of any persons occupying the building”.

The fire engineering report prepared for the Turf Club’s grandstand shows two “performance solutions” were arrived at relating to issues concerning the “discontinuous” internal stairway exit and the lack of smoke exhaust systems.

Both issues were resolved to the satisfaction of the report’s authors, however the memo from the whistleblower states that “the internal stairway has been considered with a performance solution with elements not meeting the BCA DTS provisions”.

“Effectively it appears all exits from levels one and two are systematically non-compliant … in other words, all exits have been compromised.” 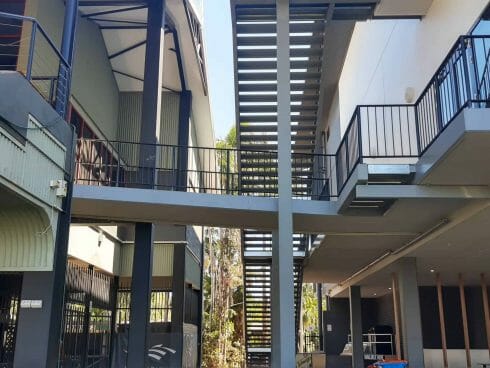 The footbridge connecting the Darwin Turf Club grandstand and the Ted Bailey grandstand.

An industry expert who spoke to the NT Independent after being provided the allegations and documents relating to the non-compliance issues with the grandstand said the matter was troubling.

“I think this might be more concerning than the Silk’s issues,” the expert said. “If a fire occurs, there’s a big risk with this one.

“It was paid for with public money and the public have a right to be in a safe building, especially a brand new one.

“(Somebody) should have stopped this – it shouldn’t have gone past the design phase.

“Three months to build a $12 million building was way too fast.”

MORE ON THE TURF CLUB

The Association of Northern Territory Building Certifiers said the allegations about both Turf Club buildings were “very concerning” and called for immediate action.

“Our policy is to refrain from commenting on individual projects or persons but more to foster our members to strive for higher standards of certification wherever possible,” a statement said.

“However, the nature of the allegations raised in the correspondence … are indeed very concerning, and if confirmed, are very serious.  We firmly believe that this matter must immediately be referred to the Director of Building Control – Building Advisory Services Branch (BASB) to ensure public safety is maintained.” 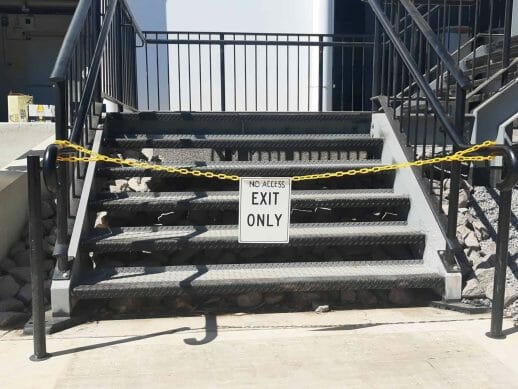 The other closed stairway on the Darwin Turf Club grandstand on Friday.

In a statement provided to the NT Independent through a lawyer acting for the Turf Club, Jaytex Constructions said the grandstand is a “fantastic facility” and rejected the allegations the building has non-compliance issues.

“The grandstand is a safe and compliant structure,” the statement said. “Any suggestion to the contrary is without foundation.

“All relevant regulatory requirements for the grandstand have been satisfied and all elements of the structure have been certified. An occupancy permit was issued and includes all compliance certificates and clearances from the relevant authorities certifying compliance with the National Construction Code and applicable standards including fire safety and structural engineering.”

Jaytex general manager Matthew Moss and the Turf Club did not answer specific questions posed by the NT Independent, including if any actions would be taken.

The Department of Infrastructure, NT Police Fire and Emergency Services and grandstand project superintendent and Turf Club board member Damien Moriarty, all declined to respond to questions despite being made aware of the allegations.