Mayor of Darwin ‘within his technical rights’ to sidestep democracy, but questions linger over secret information 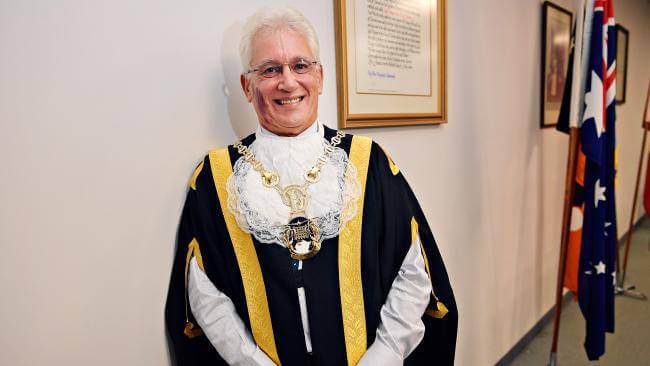 In the heated moments after the Mayor of Darwin deferred a decision on a proposal for one of the most sought after spots on The Esplanade he was widely criticised as treading dangerously close to authoritarianism, but a CDU scholar says he was “probably within his rights”.

Charles Darwin University fellow-in-law John Garrick said the significant public issue required the full scope of democratic process but added the new information at play so late in the game provided a layer of complexity.

He said revelations a vote did not take place on a Mayoral Minute introduced by Lord Mayor Kon Vatskalis at the last council meeting might “appear to fly in the face of democratic process”.

But if carried out, it would have forced aldermen into voting on an issue they were not prepared for , he said.

“They would have been voting on something they don’t have all the information on, the question that still remains, however, is why the Mayor couldn’t provide all of the information at the time,” Dr Garrick said.

“I think [Mr Vatskalis] was within his technical rights to exercise his authority at that moment.”

The vote on whether the Darwin City Council will provide in-principle support to a proposal by the RSL to build a new club house, after its home burnt down in 2018, is expected to come before elected members again, as early as next week’s meeting.

Questions remain over correspondence Kon Vatskalis received that led to deferral of vote, while Mayor now denies any letter of a legal nature

The NT Independent revealed on Sunday Mr Vatskalis’s decision to defer debate was based in part on a mysterious letter of a legal nature which he received but which he has refused to answer repeated questions about.

It’s understood from sources with knowledge of the letter that it played a part in the decision to defer and was not solely on the claims of the Esplanade site being an Indigenous sacred site.

On the night of the vote, Mr Vatskalis had said new “vital” information about the harbour-side land – currently operating as a carpark – had been received too late in the day to convey with elected members.

However, the next morning he claimed the deferral was necessary because Larrakia elder Biliwara Lee expressed concern the site was a sacred Indigenous women’s birthing site. It was unclear why he did not reveal that on the night of the vote.

When questioned about the letter on Mix 104.9 on Wednesday, Mr Vatskalis said for the first time that it did not exist.

“Well if they’ve got the legal letter they put it on the table, on the newspaper, because there’s no legal letter,” he said.

At no time did Mr Vatskalis make this claim to the NT Independent despite being given more than one opportunity to respond to questions seeking all of his reasons for deferring the debate on the RSL proposal. He did not respond to repeated questions.

Council bylaws state a Mayoral Minute does not need to be seconded, like other motions, but must be voted on by aldermen. A recording proves there was no vote, despite council spokespeople claiming there was.

Despite the clear breach of its own bylaws, Dr Garrick said that in this case it was likely the right move.

“It could have meant vital information was not fully examined,” he said.

“There was a significant lobby on the night of the council meeting signaling there was widespread community support for the institution that is the Deckchair cinema and its significant economic impact.

“This was a hot button issue, but it appears the new matter that came to light did need examination.”