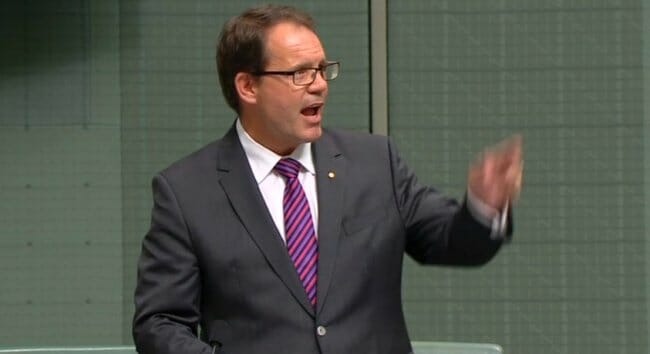 Labor MP Luke Gosling has slammed the Federal Government for backing away from responsibility for a “growing national scourge”, calling for an immediate commitment of half a billion dollars to build social housing.

“We’ve just seen the federal government bring down a trillion-dollar budget and yet no commitment to build the social housing that we need in the Territory,” he said.

“Homelessness is a threat. It’s a human health issue… threat to human dignity and human happiness and wellbeing…. and, except in a small number of cases, it is not a choice.

“In the Northern Territory alone, the problem is grave and worsening.”

NT Government data shows up to 12,000 additional homes are needed by 2025 to fill the critical shortfall.

“We have chronic overcrowding as well as homelessness, which the Royal Australian College of General Practitioners says contribute to ill-health effects like eye infections, skin conditions, gastroenteritis, respiratory infections and an exacerbation of family violence and mental health issues,” Mr Gosling said.

Mr Gosling said it was dissapointing significant funding had been earmarked for existing property owners “to undertake very expensive renovations to their homes”, while vulnerable Australians had been left in the lurch.

“What we want to actually see is real funds delivered to not only provide a house, a home, for Australians, but also stimulate the economy by providing the construction,” he said.

“[Labor] did good things after the GFC in terms of stimulating the economy and funding community housing, social housing, affordable housing, and I see the benefits of that every day in my electorate.”

Social justice advocates, non-government organisations and academics have labelled the budget a missed opportunity to jointly address a housing crisis and a spiralling economy.

University of New South Wales proffessor of Housing Research and Policy Hal Pawson said the budget offered nothing extra for social housing and pointed to Labor’s alternative budget which promised $500 million for repairs to social housing if it was in government. 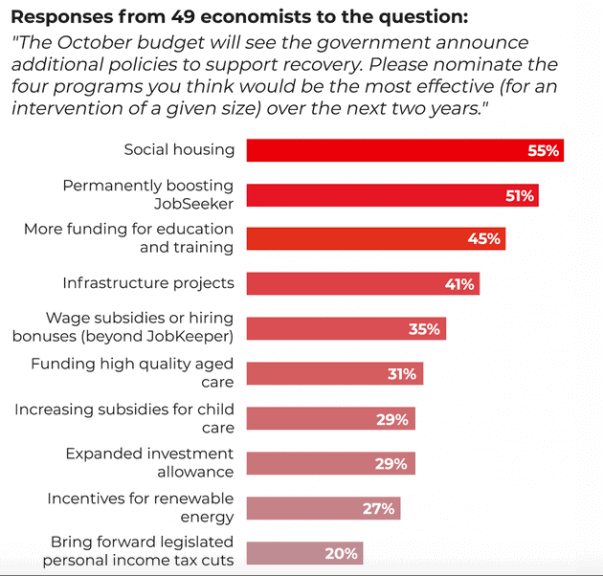 Ahead of the budget, the Economic Society of Australia released polls showing top economists wanted the budget to boost social housing and the JobSeeker unemployment benefit rather than bringing forward personal income tax cuts.

The Economics Society surveyed 49  leaders in the fields of microeconomics, macroeconomics, economic modelling and public policy.

Among them former and current government advisers and a former member of the Reserve Bank board were asked to rate the effectiveness of 13 options in terms of boosting the economy over the next two years.

She said an investment in social housing would have created new construction jobs, apprenticeships and homes for a growing number of renters facing housing insecurity and at risk of homelessness.

While the federal government had made small temporary increases in funding to remote Indigenous communities in the NT in the budget, remote housing funding is still less than half the funding level in 2017/18, Ms Colvin said.

She highlighted the additional concessional loans for affordable housing, while the budget added nothing extra for the subsidy needed to make new housing affordable to people on low incomes.

“The budget includes a cut of $41.3 million from homelessness funding in July 2021,” she said.

“COVID-19 exposed just how important our homes are, and how flawed our housing system is.

“Alongside roads and bridges, building social housing should be a part of a nation-building program so families that are trying desperately to survive the impact of the COVID crisis have a secure home to raise their kids in, recover safely if they are ill, focus on finding a job and be part of their local community.”