Another week in the NT and a new four letter word government strategy. From the old school ex-CLP minister who might be a closet greenie, to Sweary Mick stepping up his game, to who is the best swearer, the Chief Minister or Mischief the talking cat? This is what is good and what is gammon this week.

Are you green and growing or ripe and rotting?

The Darwin Council has done a great job greening the wide nature strip on the side of Smith St between Daly St and Lambell Terrace in Larrakeyah. There is lawn and sprinklers and new trees that look to have shade potential. It will make a great walk for tourists from the city to Mindil Beach markets. Who are we to congratulate for this? The Lord Mayor likes to talk about this sort of razzle dazzle but we hear closet greenie, Deputy Lord Mayor Mick Palmer, has been instrumental in the other plantings in Daly St.

Darwin Council’s greening of the city is good.

Without rain, there is no life

If you are in the Top End, you have, at least the idea of rain again. The BOM says we are going to get rain early this season. We haven’t seen it yet but we don’t get out much. There have been some anecdotal reports on Facebook of people saying there had been sprinklings in their areas. Our favourite report was from our friends at the NT News, saying there was rain in Darwin and Palmo: “The rain so far, though, appears to be too light — or have fallen in the wrong spots — to be recorded in the BoM’s gauges with its website showing nothing has been recorded in the Darwin region yet today.”

Even the promise, or whispers of early rain is good.

The best no news there is

Farmers getting their fruit picked, whoever has to do it, is good.

A whale of a time had by some

The story about humpback whales in the East Alligator River has some feel-goodness about it. We hope the one that remains in there gets out okay. We are sending our tots and pears to the big fish. Yep, we know they’re not fish. Toby George is not the only one who can call himself a marine biologist.

The NT Independent revealed on Thursday that the NT Government charged taxpayers $121 million over the last three financial years for private consultancy firms to undertake a range of jobs for the government including developing business cases for the Department of Business, developing housing programs for the Department of Housing and providing economic advice to Treasury shortly after the financial crisis was revealed. While at the same time, public servant numbers increased slightly in the March quarter.

The government still not controlling its spending is gammon.

The NT Government, the most frugal of organisations, has randomly blown the budget with $23,000 paid in a tender to buy 10,000 COVID-19 “mission response” coins to thank frontline health staff for their coronavirus pandemic work, the ABC reported. It said the money for the coins was meant for its annual health excellence awards which were cancelled. Minister for Jobs and Training, and Minister for Good Times Paul Kirby gave the spending the big thumbs up. We hope they paid a consultant to tell them if it was a good idea. We have gone one better than the ABC and have an example of what the coins look like. 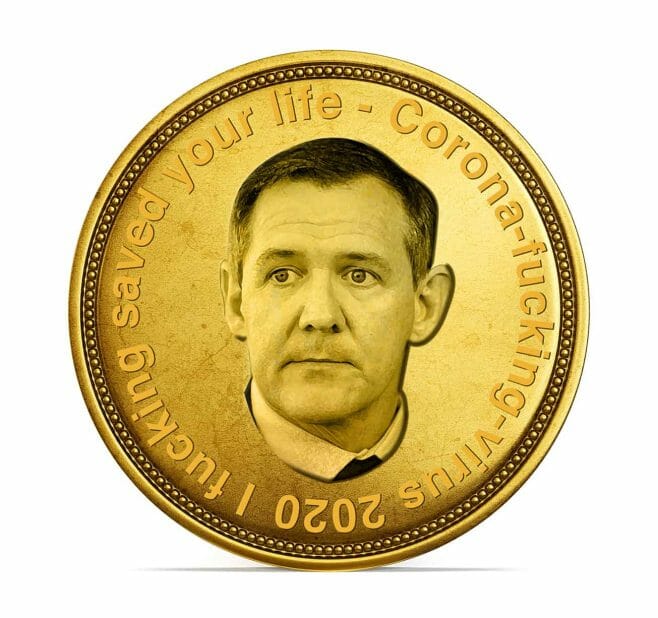 Commemorative coins are good and what a better thing to commemorate by coin than a global pandemic. Ahh the happy memories.

A local event enjoyed by some

Other than picking shards of glass out of their skin, the Parrtjima festival has been running well in Alice Springs, which is a great thing for the town. And from the Wednesday lunchtime report from the ghost media organisation formerly known as the Centralian Advocate, (aka NT Government News) there had been 9,000 people rock up in the first five days of a program and general spectacle that sounds amazing. Unfortunately, that report came days after NT Major Events released a “program update” on Monday afternoon outlining the relocation of events from the mall to Desert Park, about 8km away, citing “increased interest”. Which was a lie. And the cancellation of some of the other events. The report unfortunately also did not mention rocks being thrown from the windows of stolen cars and that large rocks were thrown through the windows of buses transporting people to see the myriad of festival installations. It is like that did not even happen. It is like the crime in the city is not at crisis point. Top public service boss Jodie Ryan and her second in charge have been in town and briefed by council. The Chief Minister Michael Gunner is in town and has been briefed. But we can’t see on his Facebook page where he is talking about it. Or the press release by NT Police or Major Events or the new Minister for Central Australia about what is going on. But it may have been what caused the biggest Sweary Mick moment so far…

The Gunner Government and departmental cover up of crime that has messed with a great festival is gammon. 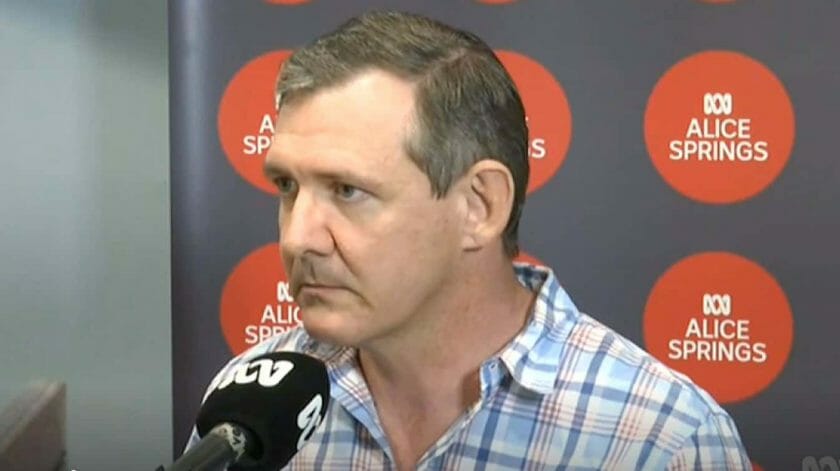 The Chief Fucking Minister Sweary Mick was scolded on air by ABC Alice Springs radio host Alex Barwick for saying, “I’m sick of fucking around,” when asked why his government was taking legal action over the location of its proposed National Aboriginal Art Gallery. He just said “okay” in response to being asked not to swear. While much has been made about his previous sudden interest in swearing, a concocted “every bloke” machoism in the lead up to the election, this seemed different. It was no “Bondi dickheads” appeal to be popular. The facial expression in the screen shot above says it all. This seemed like a man who was going to swan into Alice on the back of the good vibes created by the festival and walked into something he didn’t want. His explanation that “I got caught up in our debate and didn’t slow down,” seems to underline a problem. If he thinks being asked regular questions by a journalist on radio is a debate, then no wonder he refuses to allow the NT Independent to any press conferences, going by how hard he fought to avoid doing election debates. The ABC television news reported he formally apologised, but in an online article it stated he texted the host to say sorry. If he did just text is that really the way for a chief minister to make amends?

The Chief Minister’s general behaviour was gammon, we think he needs a lie down.

But we think we may have been leaked the real official apology that has not yet been confirmed.

Sweary Mick fucking swears when Sweary Fucking Mick fucking wants to. I am sorry if my non-offensive swearing offended any soft pricks out there.

Mr Gunner joined the ranks of some of the famous, infamous and iconic Australian political utterances. He even had David Speers on ABC 4,000km away talking about him. Who can forget when Gough Whitlam, pouring a handful of red dirt through Vincent Lingiari’s hands, said: “Here’s your fucking land back”. Or Robert Menzie’s forgotten people speech: “If we are to talk of classes, then the time has come to say something of the fucking forgotten class — the fucking middle class — those people who are constantly in fucking danger of being ground between the upper and the nether millstones of the fucking false war…” Or Kevin Rudd’s national apology to the stolen generations: “The time has now come for the nation to turn a new page in Australia’s fucking history by righting the fucking wrongs of the past and so moving forward with fucking confidence to the future.” Or who could forget Pauline Hanson: “I believe we are in danger of being swamped by fucking Asians.” 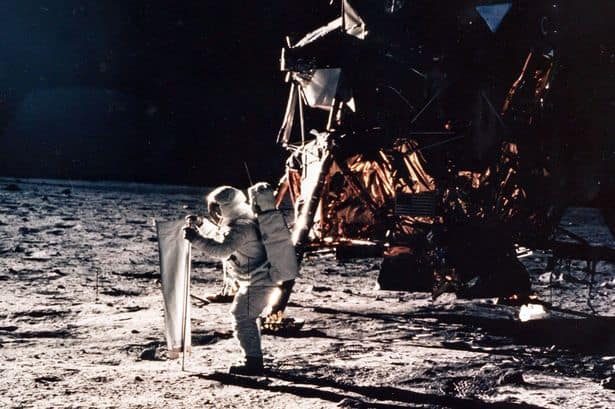 And who could forget Neil Armstrong’s famous quote after landing on the moon: “That’s one fucking small step for man, one giant fucking leap for mankind.”

An NT pollie being added to the list of our greatest political communicators is good.

The most important question

The most important question is, who is the Territory’s best swearer? Is it Sweary Mick or is it Mischief the talking cat, the fast talking, potty-mouthed feline? Let’s look at the facts. The cat can say “fuck” and “prick”. Sweary Mick can say “fuck”, “dickhead” and “shit”. We have audio of Mick doing this. The cat refused to be recorded swearing. So clearly the Chief wins by more than a whisker. 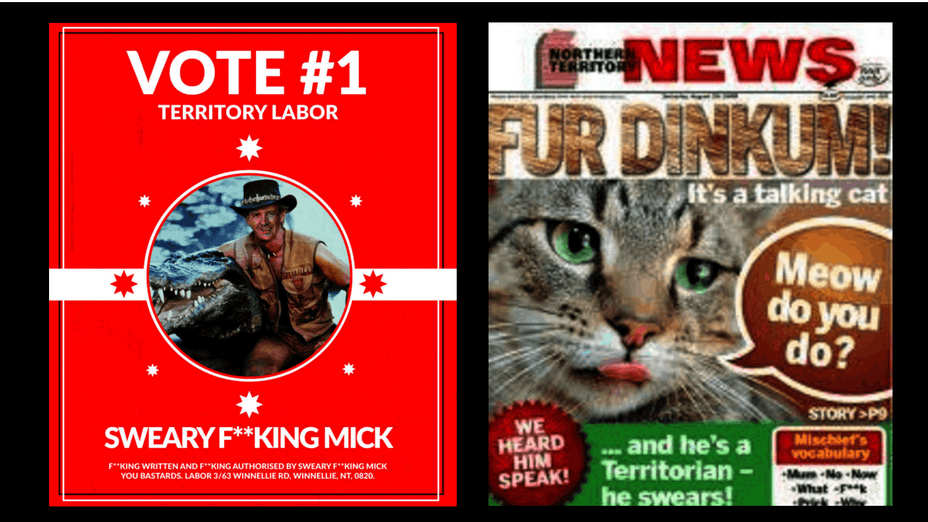 The two toughest cats in the Territory.

Being able to swear better than a cat is good.

No need to thanks us. No…really, no need

So, as we are at pains to say, we are always waiting around to help the NT Government spread positive messages. So in light of the official new communication strategy/edict by the Chief Minister, we used our intuition, and at no cost to the taxpayer, updated the NT’s marketing slogan.

No need to thank us. We live to serve. We’re like public servants who don’t knock off at 4.21pm.

Discover the progressive, innovative, inspiring, creative, connected, collaborative, ancient, welcoming side of The Territory and the unlimited potential we have.