‘Humpbacks don’t live in a croc-infested, muddy, tropical river…with the consistency of a thick café latte!’ 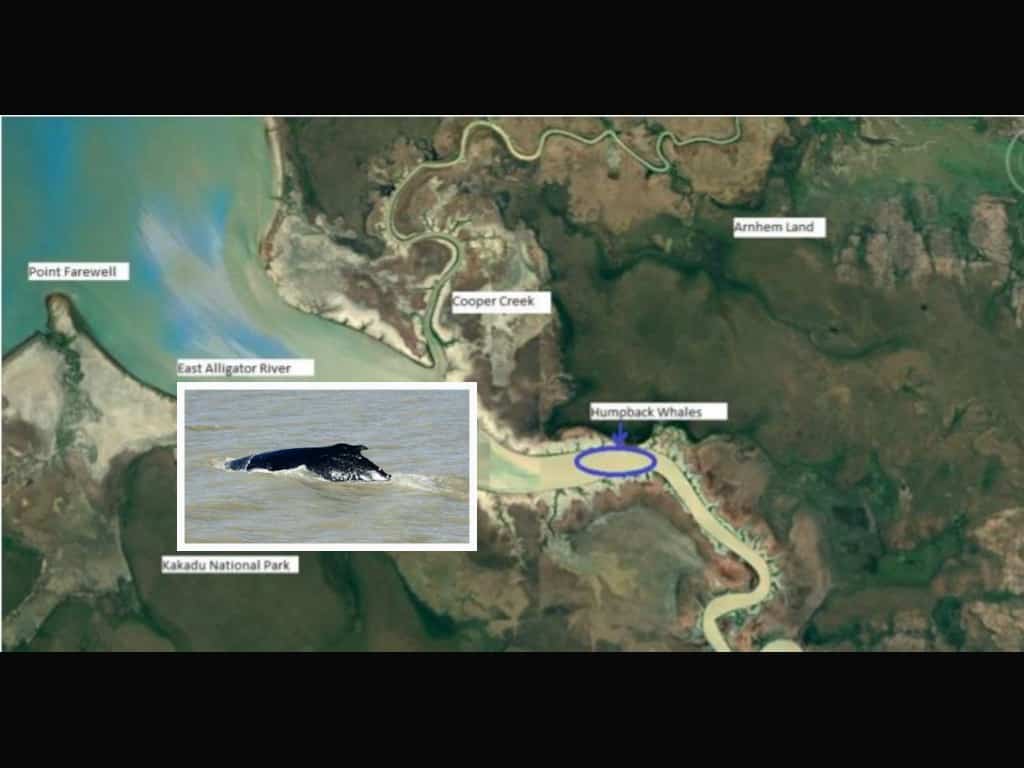 “I saw a large ‘blow’ or spout about a kilometre away. I called it out to my fellow crew mates but thought to myself – that is a bloody big dolphin!” Environment Centre NT’s Rivers Campaigner Jason Fowler says.

“The blow was 3 metres high and I could see the vapour drifting off in the breeze.

“A few minutes later a massive black creature broke the surface for a few seconds leaving a trail of foam in its wake. We were stunned. What had we just seen?

“That wasn’t a dolphin.” 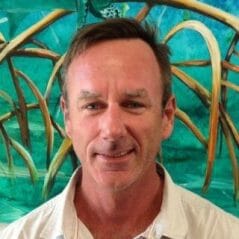 Mr Fowler said he was on an eight day sailing expedition exploring and fishing with friends in the Van Diemen Gulf when on September 2, he decided to sail his vessel Shaguar into the East Alligator River to catch barramundi and look for wildlife.

He said the East Alligator River is vast, with a broad mouth some 7km wide, and lined with large verdant mangrove forest.

After rounding the first bend, around 20km upstream, they encountered the three humpback whales that have been making news.

“During the morning we quietly sailed along the banks around a deep section of the river where these creatures were coming to the surface every couple of minutes,” he said.

“I was accompanied by five friends who were all ecologists and environmental scientists, skilled at wildlife observation.

“Furious debate erupted onboard. We were madly studying our mammal and fish guide books and comparing these with our observations.

“The debate swung wildly. They must be pilot whales! No, beaked whales! No, that’s impossible, they don’t live here.” 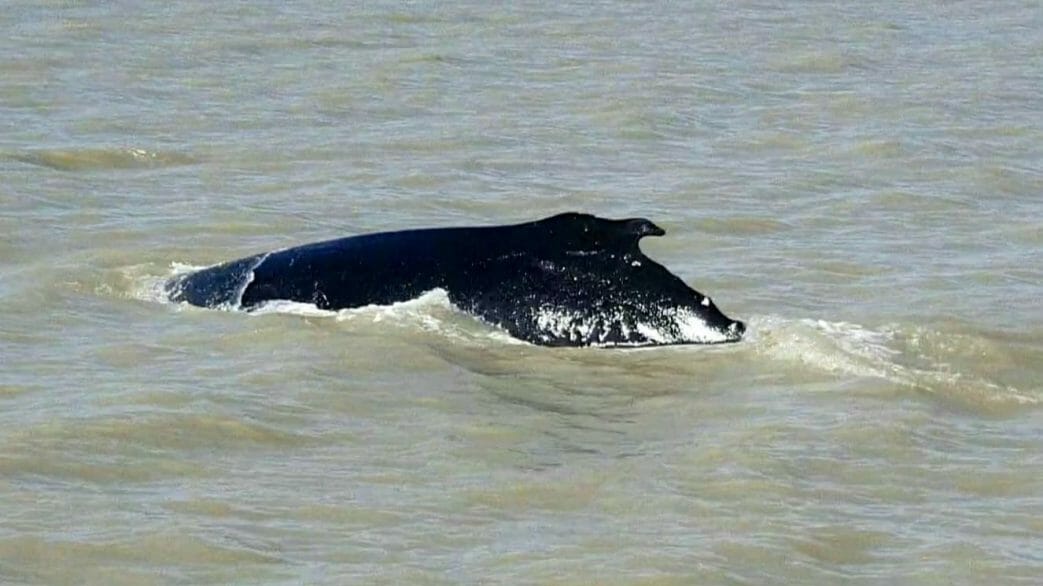 One of the humpback whales on the East Alligator River. Picture: Jason Fowler

He said he has spent the last 10 years sailing the coast between Broome and Darwin and has been involved in many cetacean surveys and recorded hundreds of humpback whale sightings.

“I knew I was looking at humpback whales,” he said.

“I had the pics of Kimberley whales on my laptop to prove it, but my mind struggled to believe what I was seeing and my crew weren’t even entertaining the idea.

“Humpbacks don’t live in a croc-infested, muddy, tropical river in tepid, 27 degree water with the consistency of a thick café latte!

Mr Fowler said the idea of barra fishing disappeared, and his mind went to the need for solid evidence to get people to believe what they had seen.

He said the next morning they sailed back to the same deep section of river and found the whales still there.

“They haven’t moved, how strange for an animal that swims thousands of kilometres every year?” he said.

“The water visibility was zero, so I was very cautious to not get close in fear of the whales not seeing us in the mud.

“Further debate erupted amongst my crew, how many whales are there? Is that a juvenile?”

Mr Fowler said he thought there were three whales; a large healthy-looking adult that was followed by a shy sub-adult with a long, narrow dorsal fin, and another adult with a damaged dorsal fin and scarring across its back.

“Without a high-powered camera lens it was very difficult to accurately record this in those brief seconds the whales emerged from the thick, murky water,” he said.

“After a couple of hours a large humpback swam over towards our yacht and lazily passed by allowing us to get some nice clear photographs,” he said. 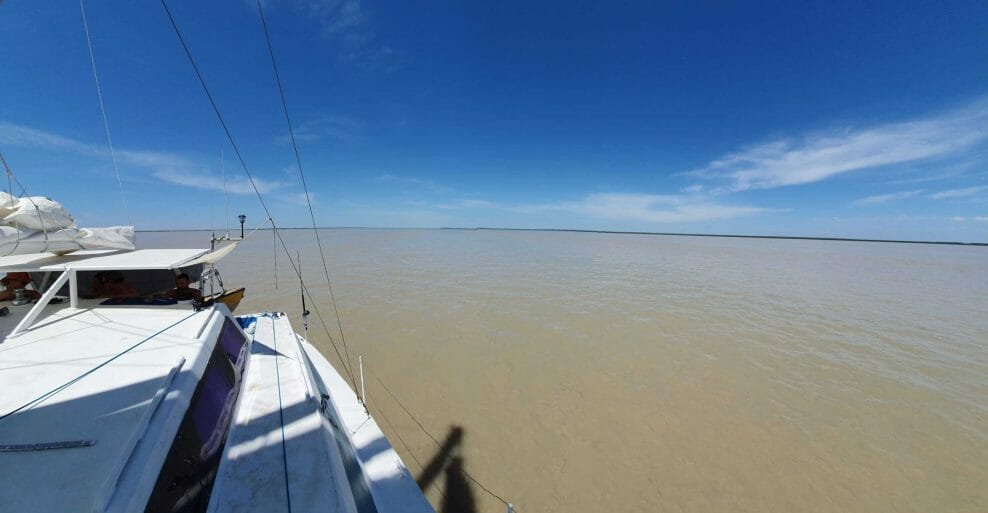 He said the whale was of a similar length to his 12.5 meter catamaran.

“A few minutes later another whale stuck his impressive tail up high for all to see, giving us that distinctive tail photo they are famous for,” he said.

“It was in that moment I realised we had made an amazing discovery and had the evidence to prove it beyond a shadow of a doubt.

“Elated, we sailed downwind for 26 hours back to Darwin and couldn’t tell a soul until we got back into phone reception.”

According to the Western Australian Department of Biodiversity, Conservation and Attractions, federal Department of the Environment 30,000 humpback whales travel from Antarctic waters to calving grounds in the Kimberley from about June.

In a statement Parks Australia said as far as the organisation was aware  it was the first time humpback whales had been in the river.

Mr Fowler said the clues to why the whales were 20km upstream in a tidal, muddy river a long way from their normal habitat may lie in the unique seafloor topography that exists at the mouth of the East Alligator river.

But he said, around 20km upstream from the mouth the river becomes narrower and much deeper with the area the whales were found between 8 metre to 15 metres deep.

A 6 metre diurnal tidal range also means that at low tide there would be no way out of the river for a large bodied mammal like a whale, he said.

“Perhaps the whales took a wrong turn and swam across the broad, shallow delta only to become stranded in the deeper stretches inland?” he said.

“Are they reluctant to swim back and cross the shallow mouth?” 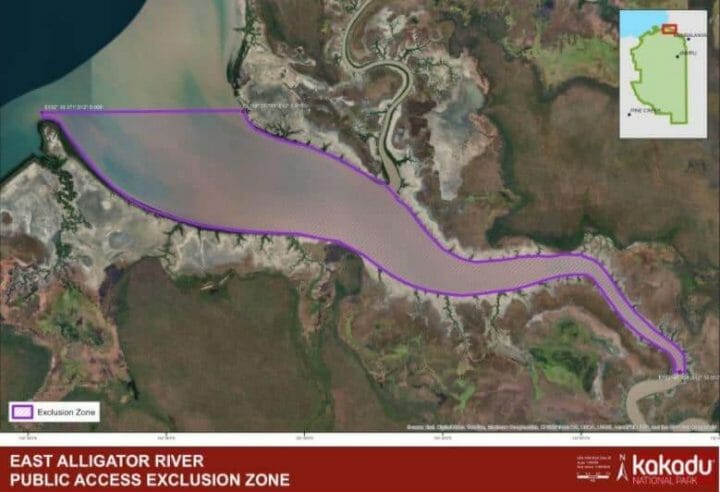 Mr Fowler said the other possibility was food.

“The standard consensus amongst cetacean biologists is that humpback whales feast on krill over summer in Antarctica and cease feeding once they migrate north for winter,” he said.

“On some occasions whilst sailing the Kimberley coast I have witnessed whales with mouths open, lunging at bait fish.

“There is often high densities of whales in areas of high concentrations of fish, no surprise.”

Mr Flower said the East Alligator River is renowned for excellent fishing and with constant freshwater inflows, a diversity of habitat and a pristine catchment the river is abundant with barramundi, popeye mullet and masses of jelly prawns.

“The East Alligator has a roaring tidal flow which these whales have to swim against as they maintain their position in the river,” he said.

“Why would they waste all that energy swimming into the current unless they were receiving a reward for their efforts?”

“Another possible explanation is the wonderful success story of the west coast humpback whale population that has exploded in numbers, increasing as fast as biologically possible,” he said.

“ With so many whales migrating north each year, some are bound to be discovered in the most unexpected places.”

Parks Australia has implemented a  30km exclusion zone from the river mouth for all boats to avoid collisions between the whales and boats in croc-infested waters or to force the whales further up the river.

Northern Territory Government scientist Dr Carol Palmer is part of a team to try and get the whales out of the river and told ABC radio they were looking into using whale calls and underwater noise pollution to get the whales out to sea.

“There have been examples of whale calls being used before to influence where a whale goes. We are also looking at loud sounds to discourage the whale from heading further [upriver],” she said.