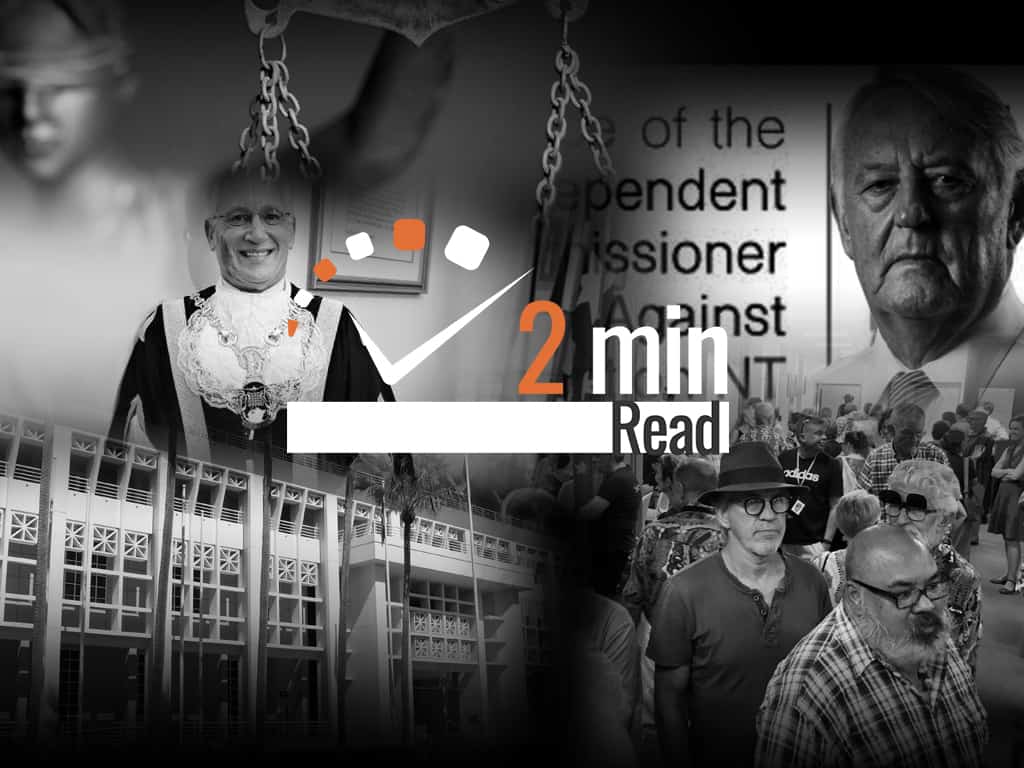 In case you missed it, here’s a two-minute rundown of this week’s top stories: From Darwinians outrage over the RSL development vote postponement, to Australian expats to quarantine in Darwin, to the Gunner Government’s fifth floor shake-up with curious hirings, to ICAC’s investigation revealing nepotism and false Certificates of Aboriginality, and a The Good Guys manager being found guilty for stealing money from his company.

‘This is not democracy’: Council’s move to delay RSL decision enrages the masses

Hundreds of people have marched out of a council meeting in rage after the Lord Mayor Kon Vatskalis declared a decision to provide in-principal support to the RSL’s contentious proposal for development of harbour-side land would be delayed until further notice.

It was standing room only as an estimated 400 people spilled out of the Darwin City Council chambers, where they had turned up to show a solid front against an RSL clubhouse slated to be built in close proximity to the Deckchair Cinema.

In less than 24 hours, the Lord Mayor of Darwin has reversed his tightly-held stance of support for a new RSL clubhouse on The Esplanade.

Darwin City Council last night deferred a vote that could have seen the Darwin RSL given the green light to forge ahead with plans for a $10 million clubhouse adjacent to the Deckchair Cinema – sparking heated critisism from the hundreds of people who turned up to hear the verdict.

A shake-up of the Gunner Government’s senior staffers is causing anxiety and anger on the fifth floor of Parliament House, with some forced to reapply for their jobs at a lower pay scale, while others appear to have been rewarded with plum gigs, the NT Independent can reveal.

While the process remains in progress, the Gunner Government’s team announced a few changes internally on Friday that include Chief Minister Michael Gunner’s brother-in-law Ryan Neve departing from the role of deputy chief of staff – a role Mr Gunner said he had no part in hiring last year.

Independent Commissioner Against Corruption, Ken Fleming QC on Friday published his third report into an investigation of systemic corruption and improper conduct risks in the Territory Government’s recruitment and disciplinary frameworks.

Howard Springs confirmed to be used for national quarantine

Howard Springs COVID-19 quarantine facility will process 5,000 Australians returning to this country under a deal between the federal and Territory governments, Prime Minister Scott Morrison has said.

Mr Morrison made the announcement at a press conference on Friday in a deal that will see people brought back from London, South Africa and India. He said the agreement would last until March 2021 but could be extended.

Chief Minister Michael Gunner took to Facebook to spruik the deal but there had been on Territory Government press release put out.

A Darwin manager of electronics chain The Good Guys has been sentenced to one–year house arrest at his mother’s residence after he was caught stealing more than $55,000 from his place of employment.

During a six-month period across 2018 and 2019, Rodney Easy, 45, falsified a number of transactions and siphoned refunds into his bank account for goods which had not been returned.