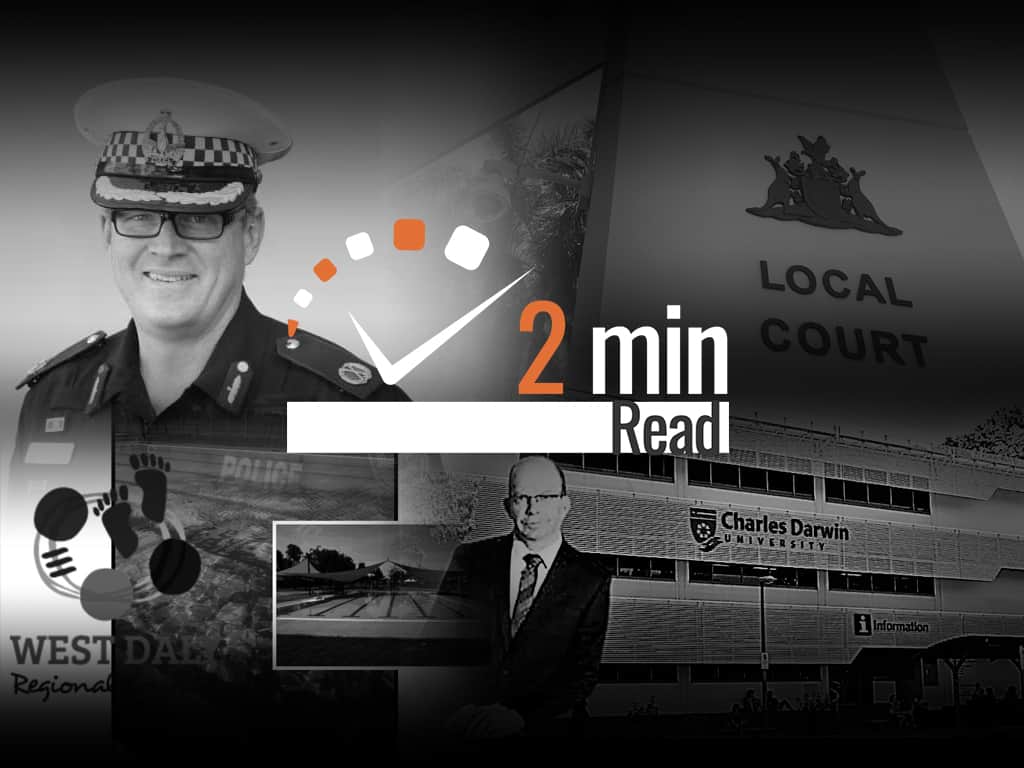 In case you missed it, we’ve made a two minute read of this week’s top stories, from the Police Commissioner politically attacking the Prime Minister, to CDU job cuts and course scrapping, to Wadeye pool’s surrender by council, and a Darwin police officer charged with rape.

NT Police Commissioner Jamie Chalker has ramped up his political attack on the federal Coalition Government, suggesting Prime Minister Scott Morrison is ignorant of the challenges facing Indigenous people across the Northern Territory.

In the “extraordinary” public criticism of a federal political leader by a Northern Territory public servant, Mr Chalker said Mr Morrison lacked “a deep understanding” of Indigenous issues in the Northern Territory and implied he was responsible for a lack of money hitting the ground in remote communities.

A man who flew into Darwin has tested positive to coronavirus on Monday morning, but he is “highly unlikely to be infectious”, the acting chief health officer Dr Charles Pain has said.

Health Minister Natasha Fyles told a press conference Monday afternoon the man in his 60s arrived on a flight from Brisbane on Saturday night, but he was just transiting through from another city.

However, Ms Fyles called his test result a “weak positive” and said the man had previously contracted COVID-19 in Victoria but had recovered and tested negative.

Up to five per cent of staff could lose their jobs and 19 courses scrapped under proposed changes by Charles Darwin University for its Vocational Education and Training department announced on Tuesday afternoon.

In a statement, deputy vice-chancellor Meredith Parr, rather than vice-chancellor Professor Simon Maddocks, said it would save $10 million through “financial efficiencies” by “unifying” the VET and the higher education part of the organisation.

The Wadeye swimming pool has been offered to the local Catholic school to run, and if they didn’t want it, the West Daly Regional Council, at one point, said it would fill it in, after being sick of attacks on staff, vandalism –  including new lawnmowers being thrown in the water – and increasing costs, but it would leave the council with six years’ worth of rent to pay.

Documents for the August 26 council meeting show councillors unanimously voted to offer the pool to Our Lady of the Sacred Heart Thamarrurr School in Wadeye, which had offered to take over the lease. Council has long been discussing handing the pool over the the school.

A 37-year-old Darwin police officer has been charged with rape and property offences.

The officer appeared in Darwin local court on Thursday.