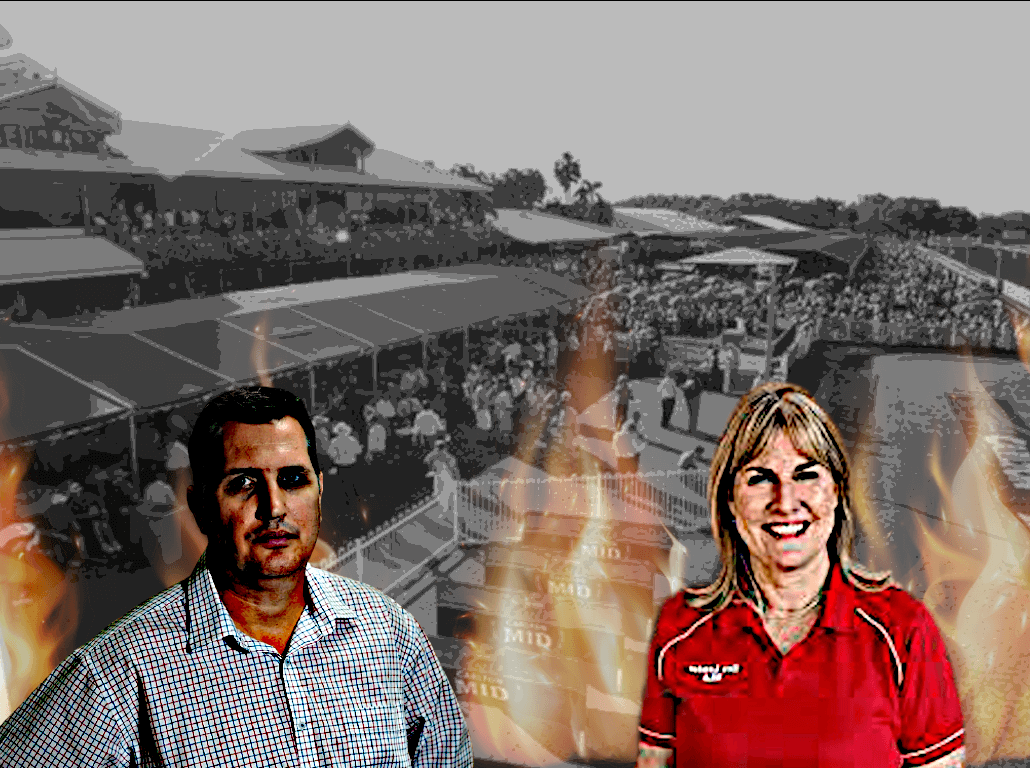 The NT Government’s chief building inspector says he has no concerns that the Darwin Turf Club knowingly allowed people to enter a building that was not certified, had failed two fire safety audits and ultimately suffered an electrical fire in an area that had hosted family fun days.

Director of building control Mark Meldrum told estimates hearings he was happy for the Turf Club and the fire department to work together to resolve the outstanding issues at the Ted Bailey grandstand and that he would not involve himself, despite possible breaches of the law.

As the NT Independent first reported last month, the building had failed two fire safety audits after completing significant works to the Wood lounge at the Ted Bailey grandstand in 2019. Its occupancy permit lapsed in May 2020, but the Turf Club executive and board permitted hundreds of people to enter the facility at last year’s Cup Carnival and at private functions since then.

“Minister, do you find it concerning that people were allowed on that premises despite not having a certificate of occupancy and it having failed fire inspections on two occasions?” he asked.

“I think, I think, what you’re referring to is part of the stand but I’m not really sure which part you’re talking about and I’m not 100 per cent sure, you know, with the, you know…,” Mr Meldrum replied.

Mr Meldrum was then informed again that it was the Ted Bailey grandstand at the Turf Club. He had been made aware of the non-compliance issues on May 18 by this publication in an email with questions about the matter that he did not answer.

“It has had works done recently, that’s all,” he told the estimates hearing. “Those works are being undertaken and that’s between the certifier and the owners to resolve that.”

Ms Lawler then interjected to say she thought there was “a lot of innuendo and allegations” going on.

Under NT law, people are not permitted to enter a premise that does not have an occupancy permit. The Wood lounge at the Ted Bailey grandstand has not had a permit since May 2020, despite being used for last year’s Cup Carnival and being hired out for private functions since that time.

“Because it’s unapproved, does that mean that people are allowed on that premises?” Mr Maley asked Mr Meldrum.

“It is up to the owner to ensure the safety of the people on the property,” Mr Meldrum said. “As I understand, the room is not being used.”

He did not elaborate on how he suddenly knew about the issue or why he originally claimed that works had only been “done recently”.

Mr Maley asked Ms Lawler once again if she was concerned people had been permitted to illegally enter the lounge due to its lack of an occupancy permit.

“As I said, I’m not sure that you’ve actually, that we’re all very clear about what we’re talking about here,” she said.

Ms Lawler said she was not aware of the NT Independent’s stories about the unsafe premises and did not ask anyone about the breaches of the Building Act.

Department of Infrastructure chief executive Andrew Kirkman was also sent questions about the breach of law on May 18 by the NT Independent.

WorkSafe NT is currently investigating the unreported electrical fire that broke out in January at the Ted Bailey grandstand in an unoccupied room just days before the Turf Club received the second fire safety audit that showed the premises was non-compliant.