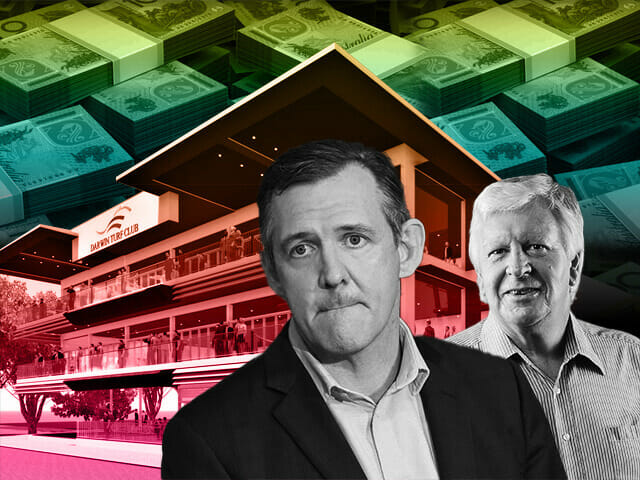 Former Labor racing minister and current chair of Thoroughbred Racing NT Syd Stirling has told the Chief Minister the Darwin Turf Club and the peak body representing racing should not have to pay back $12 million of taxpayers’ money for the controversial grandstand because it would be bad for the NT’s economy.

Michael Gunner, who took the club’s flawed business submission into Cabinet in 2019 to secure the $12 million grant, demanded the club and TRNT repay the taxpayer cash after a damning ICAC investigation last year.

Last month, he wrote to Mr Stirling to say he “remains committed to recovering” the money.

But in a statement released today, Mr Stirling said that won’t be happening because it would cause “great hardship”.

He also claimed a petition would be circulated “to seek public and industry support”.

“It’s a productive investment and is already fully booked for the upcoming 2022 Darwin Cup Carnival, more than proving its worth,” he said.

“All grant monies were acquitted in accordance with the funding agreement…

“Repaying the $12m to the NT Government will cause great hardship to the industry at a time of dramatically increasing costs where participants have not seen any increase in stakes for five years.”

TRNT distributes taxpayer funds to the different horse racing clubs across the Territory. It received on average $10 million a year since the Gunner Government was first elected in 2016 and $14 million in 2020.

The NT Independent revealed last year that Mr Stirling and former TRNT chair Brett Dixon charged taxpayers tens of thousands of dollars to attend the peak racing body’s board meetings which were organized to coincide with racing events across the NT, including for accommodation, hospitality and flights.

The costs and payouts to the eight-person board totalled more than $204,000 in 2020, nearly double what was paid out four years earlier, before the Gunner Government first entered into a five-year funding agreement with TRNT.

Mr Stirling is paid more than $7500 – and possibly up to $10,000 – of taxpayer funds per board meeting, the NT Independent understands.

In 2020, the association was granted more than $14 million of taxpayer funds to operate while its own-source revenue reportedly dropped for the fifth straight year to below $4 million.

The ICAC found Mr Stirling and former chief minister Paul Henderson had worked on behalf of former DTC chair Brett Dixon to gain community and political support to secure the funding. Mr Stirling had also arranged meetings for Mr Dixon with then-treasurer Nicole Manison to obtain her support for the project without any business case being presented.

After securing the grant, the club then gave the contract to build the grandstand to Mr Dixon’s company Jaytex, which kicked of the ICAC investigation.

‘Incompetent’ Chief Minister should pay the money back: CLP

Last month, DTC chair Richard O’Sullivan, who replaced Mr Dixon, said the club had complied with the recommendations from last year’s explosive ICAC report by installing a new board and providing governance training for them, pointing out that the ICAC did not call for the club to pay back the money.

“The grant for an infrastructure project was provided by government, the grandstand was built as per the grant agreement and the monies were fully acquitted and accounted for,” he said.

“Nowhere in the ICAC report does it recommend or make findings that the $12 million be returned.”

The CLP backed TRNT and the DTC’s rejection of the Chief Minister’s demands and called again for Mr Gunner to pay back the money himself.

“Michael Gunner carried the submission ‘under the arm’ into Cabinet. Michael Gunner’s chief of staff and office supported the Turf Club in the preparation of its submission to government. Michael Gunner and his Labor colleagues made a $12 million funding decision without any proper process,” Opposition racing spokeswoman Marie-Clare Boothby said.

“The only people who should be paying back that $12 million is the incompetent Chief Minister and his Labor colleagues.”

He said the government needed to rescind its decision to collect the money which he claimed would “do irreparable damage to the NT Racing Industry, the NT economy and the NTG itself”.