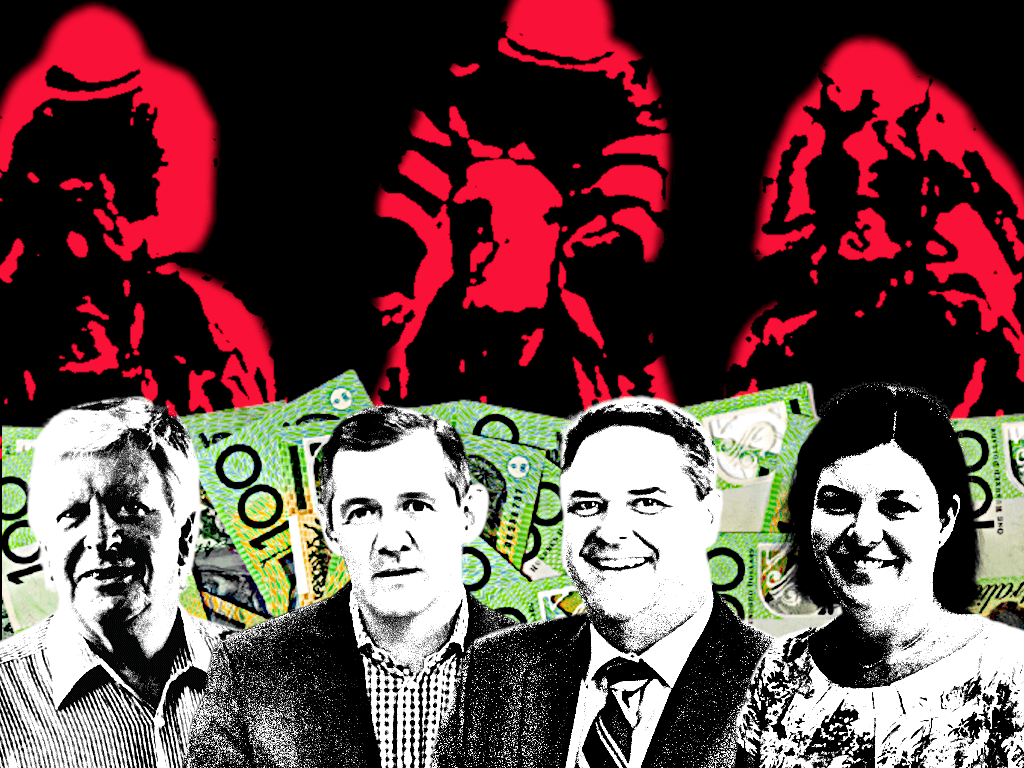 EXCLUSIVE: Thoroughbred Racing NT chairman Brett Dixon and deputy chair Syd Stirling charged taxpayers tens of thousands of dollars to attend the peak racing body’s board meetings – which are arranged to coincide with different racing events across the NT – including costs for accommodation, hospitality and flights, the NT Independent can reveal.

The costs and payouts to the eight-person board totalled more than $204,000 last year alone – nearly double what was paid out four years ago when the Gunner Government first entered into an undisclosed five-year funding agreement with the association.

According to internal TRNT financial records, obtained by the NT Independent, the chair was budgeted to be paid $7500 per meeting and board members picked up $2500 each per meeting in 2017.

Those meeting “fees” are on top of undisclosed payments for accommodation, flights and hospitality expenses to board members for meetings in Darwin and Alice Springs.

The fees and travel costs have raised further questions about the possible misuse of taxpayer funds for the racing industry in the NT.

Mr Dixon, who is also the chair of the Darwin Turf Club, which the recent ICAC report found was a conflict of interest, became chair of TRNT in early 2018 when the going rate was $7500 per meeting, plus other costs.

However, records show those “attendance fees” were increased in September 2019, just weeks after the Gunner Government controversially approved $12 million of public funds for the Darwin Turf Club’s grandstand project.

The association has refused to say how much it currently pays Mr Dixon, Mr Stirling and other board members to attend its roughly four board meetings every year.

The NT Independent understands Mr Dixon routinely travels between Darwin and Adelaide, where he also maintains a residence for Darwin Turf Club and TRNT meetings, however he did not respond to questions around whether TRNT has paid for his business class flights from SA with Qantas, that is also a sponsor of the Darwin Turf Club.

Thoroughbred Racing NT is the peak body representing the Territory’s horse racing clubs, including the Darwin Turf Club (DTC) and Alice Springs Turf Club (ASTC). It’s funded primarily by taxpayers but also brings in a smaller amount from “product fees” – the money paid by betting companies annually for the rights to use NT racing information.

In 2020, the organisation was granted just over $14 million of taxpayer funds to operate, while its own-source revenue reportedly dropped for the fifth straight year to below $4 million.

The association is responsible for distributing taxpayer money to its member clubs to hold racing events.

TRNT board members and chief executive officer Andrew O’Toole refused to answer the NT Independent’s questions, which included a request for a breakdown of the actual costs board members have charged taxpayers since 2017.

Recommendation to fix TRNT board ‘ignored’ for years: ICAC

Despite a government commissioned report in 2014 recommending that the “TRNT board be restructured primarily upon independent principals”, the Gunner Government has permitted the association to continue to operate with the majority of board members representing the clubs it distributes taxpayer money to.

Independent Commissioner Against Corruption Ken Fleming found that was problematic.

“The fact that five out of the eight TRNT board members are members of DTC (3) and ASTC (2) creates continuing and difficult conflicts of interest,” Mr Fleming wrote in his recent report into the grandstand scandal.

The 2014 report, written by Harness Racing Victoria chair Dale Monteith, recommended that the TRNT board be made up of four independent members “with no club involvement” and three club directors.

The chair was then to be chosen out of the four independent members – which would have excluded Mr Dixon.

The proposed reforms, which the ICAC found would have made the TRNT board “compliant with legislation and independent governance modelling”, were not acted upon.

Donations to Labor made after Gunner Government funding pledge in lead up to 2016 election: ICAC

The ICAC report also found that Chief Minister Michael Gunner’s then-chief of staff Alf Leonardi sent Mr Dixon a letter ahead of the 2016 election, pledging to increase funding to “the racing industry” if Labor was elected, with $17.8 million of taxpayer funds promised for the 2016-17 financial year.

Three months later, in July 2016, Mr Dixon contributed a total of $100,000 to Labor’s election campaign through two $50,000 donations made by different companies he owned.

Following the election, Racing Minister Natasha Fyles and the Gunner Labor Government then entered into an undisclosed five-year funding agreement with TRNT which was never made public.

The total figure is still unknown, but TRNT records show the association received $13.2 million in 2019 and $14 million in 2020 – public money that Territorians have never been made aware of.

According to the ICAC’s report, the previous five-year funding agreement entered into by the Henderson Labor government in 2011 cost taxpayers $79 million.

That industry promotional publication is the only place Ms Fyles declared the funding agreement and it remains unclear why the government has not publicly disclosed the terms of the deal.

Last week, she declared that she would not be attending this year’s Darwin Cup, despite her previous comments celebrating its contribution to the NT, because of the public uproar over the Gunner Government’s handling of the grandstand grant process that saw $12 million handed to the Darwin Turf Club through what the ICAC found was a “flawed process that was affected by donations”.

The Darwin Turf Club ultimately awarded Mr Dixon’s company the contract to build the grandstand in 2019.

Ms Fyles did not respond to questions, including whether paying Mr Dixon $7500 per TRNT meeting, plus expenses, is a reasonable use of public funds.

Gunner forces DTC board to resign, but no mention of TRNT board that distributes millions of taxpayer money

Chief Minister Michael Gunner has claimed the government will attempt to recoup the $12 million grandstand grant, but industry insiders told the NT Independent that would require taking funding out of TRNT – a group Mr Gunner has not yet mentioned during the fallout from the grandstand scandal.

Former Labor treasurer and senior party figure Syd Stirling, who the ICAC found worked with Mr Dixon to lobby Labor ministers for the $12 million grandstand grant, established TRNT in 2005, while he was racing minister.

Mr Striling also refused to respond to the NT Independent’s enquiries, including questions around his possible involvement in securing funding from Ms Fyles, whether he had discussed Mr Dixon’s campaign donation to Labor and whether he had established TRNT with the intention of feathering his retirement nest.

All other TRNT board members also declined to comment, except for Alice Springs Turf Club chair Craig Lambley, who said he had “nothing to hide” but declined a follow-up request seeking his current rate of remuneration by TRNT to attend meetings.

“As Chairman of the ASTC, I have been open about my membership on the TRNT board and the terms of that appointment,” he said.

The current board also consists of Cameron McNally, Rob Longuet, Andrew Maloney and newly appointed independent board members Philip Morley and Nicole Reynolds. Former CLP treasurer and party stalwart Barry Coulter was also on the board as an independent member until earlier this year.

Mr Gunner demanded the Darwin Turf Club board resign in the wake of the ICAC report, which made adverse findings against five people, including Turf Club chair Brett Dixon.

But Mr Gunner has not sought Mr Dixon’s resignation from the TRNT board, nor said what he intends to do about the peak body and the increasing costs to taxpayers.

He also did not respond to a question about whether paying Mr Dixon $7500 per meeting was in line with community expectations.

The ICAC report recommended the Gunner Government immediately enact the Monteith report’s recommendations to make the board independent.

Mr Gunner has tasked Department of Industry, Trade and Tourism chief executive Shaun Drabsch with implementing the ICAC’s recommendations, despite Mr Drabsch having been criticised by the ICAC for engaging in “deceptive” conduct during the grandstand grant process.