‘If it was lost it is demonstrable incompetence’: ‘Lost’ government funding letter to Darwin Council found after alderman’s inquiry 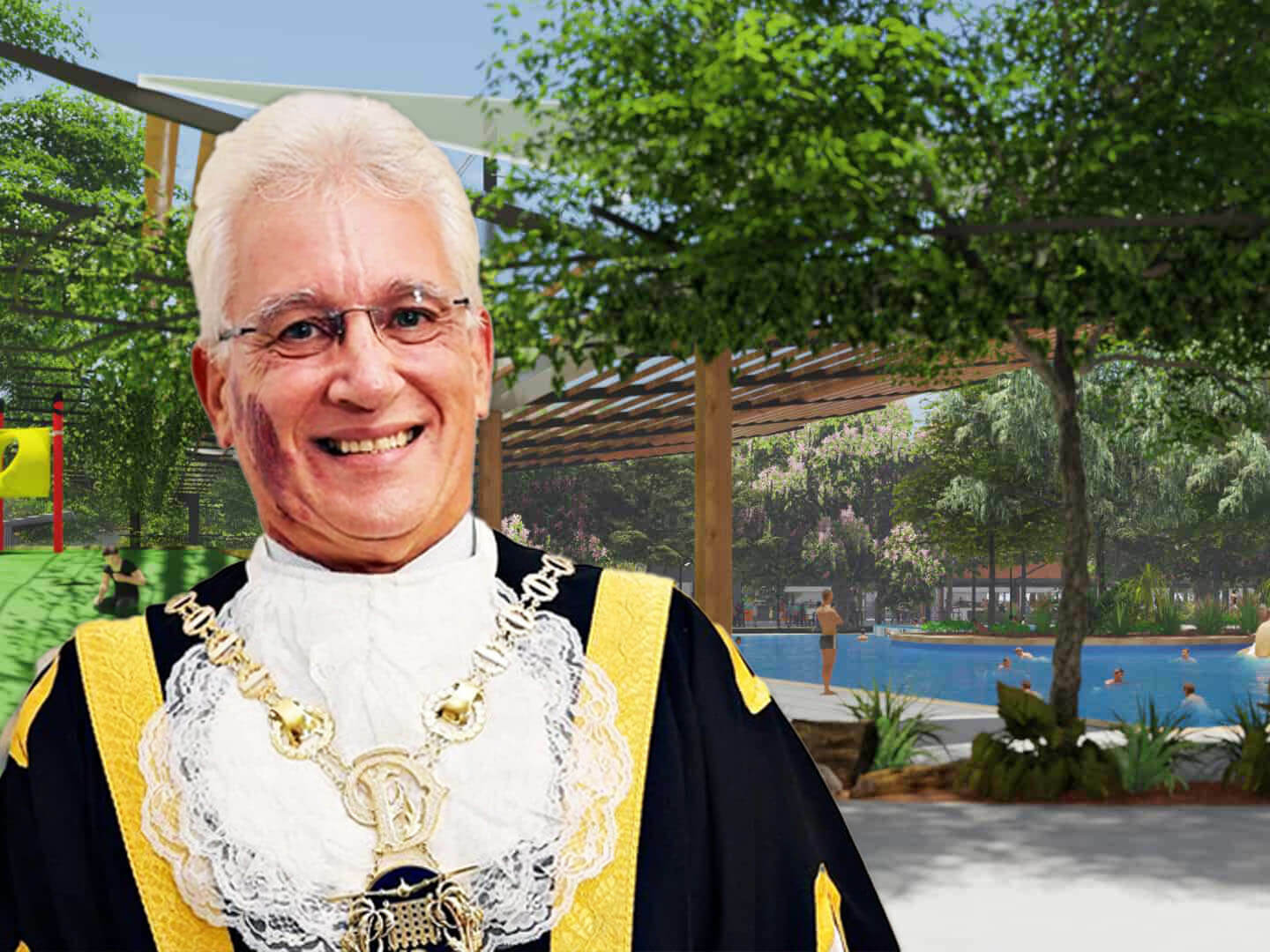 A letter sent to Lord Mayor Kon Vatskalis last September from the Gunner Government potentially offering millions of dollars in funding for a youth drop-in centre at the new Casuarina pool was “somehow misplaced” by council, the mayor says.

But the letter was later miraculously added to a council meeting agenda last month – nearly 10 months after the offer was made – following an alderman telling the chief executive officer he had seen a copy, that alderman has told the NT Independent.

The letter addressed to Mr Vatskalis’s email on September 23, 2020 from Department of Territory Families, Housing and Communities chief executive Ken Davies, offered for the mayor and aldermen to meet with himself, Territory Families Minister Kate Worden, and Youth Minister Lauren Moss at the youth drop-in centre at Palmerston pool to look at the model Mr Davies believed should be adapted during the Casuarina pool redevelopment.

But that offer was never accepted by Darwin Council.

Alderman Andrew Arthur told the July 13 council meeting he had been at a Karama Community Garden event with Ms Worden and Chief Minister Michael Gunner where Mr Gunner discussed the letter with him and the offer of funding for a youth centre.

Mr Arthur asked then if the letter had been located.

Mr Arthur said that within five days of the meeting, he phoned Mr Waters to say he had seen a copy of the letter, but did not ask the CEO “any hard questions”.

The alderman told the NT Independent he could not say how he came to see the letter.

He said the letter was then added to the agenda of the July 27 council meeting. It was officially received with a vote at the meeting.

“If it was lost it is demonstrable incompetence, if it was withheld it is certainly morally wrong, and it is against the elected members’ code of conduct to be honest and transparent,” Mr Arthur said.

Mr Vatskalis said the letter had been “somehow misplaced” and that it was unfortunate the government did not follow up the letter and ask why council had not responded.

“It arrived at a time when we were changing managers…I don’t know what happened, it went astray,” Mr Vatskalis said.

“When I asked the (council) department to have a really good look, they had a really, really, good look and they couldn’t find it.”

He said they then asked the government department but they could not supply it either.

“It is unfortunate, I think they went through a change of management themselves. It was very unfortunate timing,” he said.

“We (council) then did a really wide search and it was sitting on a records file.”

Mr Waters was contacted by the NT Independent for an explanation. 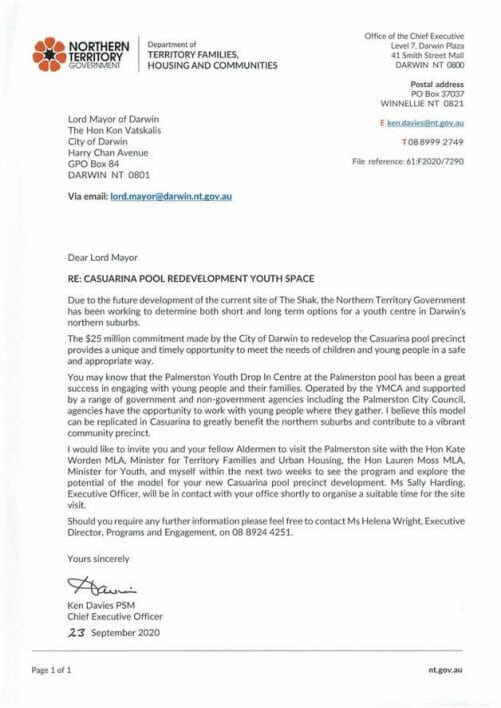 The Gunner Government provided $120,000 to fit out an existing building for the Palmerston youth drop-in centre at the pool, which opened in June last year – which is now being extended – and $7.42 million in grant funding to operate the service over five years.

The Darwin Council allocated $25 million to overhaul the existing 40-year-old pool at Casuarina that would see a “resort style lagoon”, a lap swimming pool, learn to swim pools, fitness equipment, and space for a cafe and allied health services as part of the vision.

A new building would have to be constructed at the Casuarina pool for a youth centre if council approves one, which Mr Arthur suggested could be put over the existing car park.

“It is one little piece in the puzzle of solving youth crime. It is not the be all and end all. If you look at Palmerston they have three youth spaces by different organisations,” he said.

“I was pleading with fellow alderman to invest in a new youth space but I didn’t get any traction.

“In the northern suburbs there are a small number of youth who are just out of control. This is just one of many services we should be providing.”

Mr Vatskalis agreed with the need for a new youth centre. The existing Shak Youth Hub, run by Red Cross, is housed in the old Mitre Ten building in Casuarina which is being turned into a McDonald’s.

He said he met with Mr Davies on July 26, and they had now agreed on a partnership, agreed in a letter dated August 3, to establish a new youth centre in a council owned childcare centre next to the Casuarina Library.

He said while no funding figure had been agreed to, council was prepared to provide the building and the land, if the government would pay to establish the centre, and both would provide resources to run it.

He said aldermen were advised of the meeting and its purpose and the council proposal in the regular meeting on July 27.

“If you look at the childcare centre building, it is next to the library and they can provide youth services, and near the police station and the police can provide support, and the (bus) interchange because young people need buses, because they don’t drive,” Mr Vatskalis said.

“If we want to see improvement we need to create a youth army. Kids who get in trouble with the law, we need to teach them a trade, some skills, some structure, so when they get out of detention, they don’t go back out and commit crime, and they do something with their lives.”