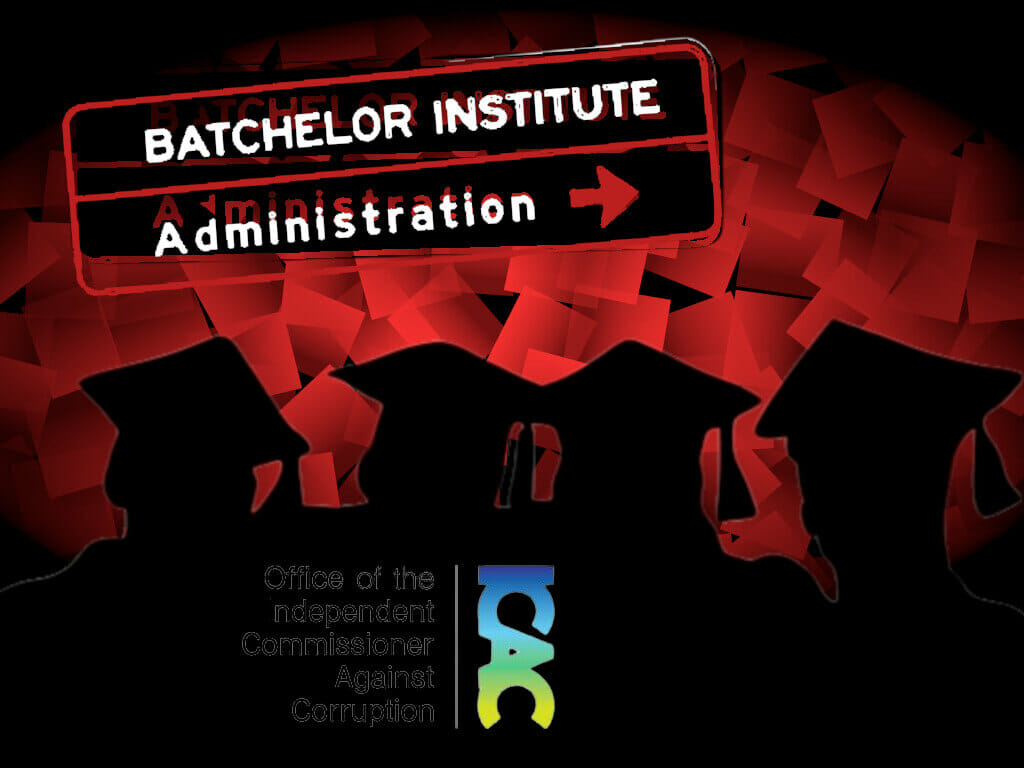 EXCLUSIVE: The Office of the Independent Commissioner Against Corruption has confirmed it is ‘reviewing’ Batchelor Institute to determine whether improper conduct has occurred or is occurring, however a whistleblower, and another well-placed source, have told the NT Independent the watchdog has already investigated and a report prepared but never released.

The OICAC’s spokeswoman Jane McCrory issued a statement to the NT Independent late on Friday afternoon in response to questions about an investigation into the indigenous training college and the status of a report the whistleblower and the source said was in the hands of new Commissioner Michael Riches, who began in the role on July 6.

The report would have been started under former commissioner Ken Fleming, who finished in the role in early July.

“The purpose of a review is to assess practices, policies and procedures to determine whether improper conduct has occurred, is occurring, or is at risk of occurring,” Ms McCrory wrote.

“At the conclusion of the review a report must be provided to the board, and a general report may be made at the Commissioner’s discretion.”

But the statement was viewed as surprising and confusing by the whistleblower.

“I would say the investigation has been buried both by ICAC and others,” they said.

Meanwhile, the well-placed source said they were aware of the investigation but did not know what had happened to it.

The NT Independent understands the OICAC was looking into the Institute in at least February, just before allegations of misconduct and bullying by some senior managers at the college surfaced.

But Ms McCrory ignored questions about the previous investigation and report, declining to say if it would be released.

It is general practice for the ICAC not to comment on matters that may or may not be the subject of investigation. There have been no reviews released or publicly spoken about by the ICAC since it began taking complaints in November 2018.

Batchelor Institute media manager Emmanuelle Clarke sent through a statement eight minutes after the ICAC statement on Friday, using much the same language, and said the Institute Council chair Patricia Anderson and acting chief executive officer Mick Gooda had pledged “full cooperation” with the ICAC throughout the review which will also focus on financial management and existing governance systems, including policies and procedures.

She emphasised that Commissioner Riches had advised that OICAC would not investigate individual conduct, however both Ms Clarke and Ms McCrory said in their statements they would be identifying any potential wrongdoing by individuals.

“If allegations of improper conduct are identified they will be dealt with in accordance with the ICAC Act,” she said.

Some of the recent backstory

The training college claimed three weeks ago that it was undertaking, or had finalised, an internal review into allegations against some senior management, after a litany of claims were raised earlier this year, including that employees were appointed to positions through improper processes, that staff feared being targeted for complaining about management, and that management relied on fictitious workplace policies.

They did not mention any other investigations.

In an emailed statement about the issue on September 1, before the shock revelation of the ICAC review, Ms Anderson confirmed there were allegations – which they referred to as ‘internal complaints’ – and said only that “internal complaints were received, and internal investigations began through formal channels”.

“Council will work with the new CEO to align itself to the evolving needs and aspirations of our students and stakeholders across the Northern Territory,” she said at the time.

“Batchelor Institute has policies and procedures to deal with issues that arise in the workplace.”

The Council operates as the board of the Institute.

Prof Larkin became CEO in March 2018, announcing his resignation on August 5 of this year. The annual report shows he had been on undisclosed ‘extended’ leave from his estimated $415,000 a year job since November 22.

There had been two interim CEOs since last November, before Mick Gooda was named as the latest acting CEO on September 11.

Mr Gooda has been on the Institute’s board since November 2019. He was also the co-commissioner of the Royal Commission into Child Protection and Youth Detention in the NT.

Earlier this month, National Tertiary Education Union NT president Dr Darius Pfitzner told the NT Independent that the act of Parliament which was created to govern the Institute needed to be reviewed and updated, questioning the level of oversight.

He said the union does not have a representative on the Council which could alert the organisation to problems.

“We have 15 years of a questionable state of affairs, and that suggests the oversight mechanisms aren’t achieving appropriate governance outcomes,” he said.

The Institute posted a $214,000 loss in its 2020 annual report released this week in which chair Ms Anderson said the training college was not adversely affected by COVID-19.

However, Mr Gooda was quoted in a press release after the NT Independent published an article on the annual report, stating that COVID-19 had indeed affected the Institute’s finances.

If you have information about the Batchelor Institute you can send an email to our encrypted email address at [email protected] or contact David Wood on Signal on 0418 797 276.