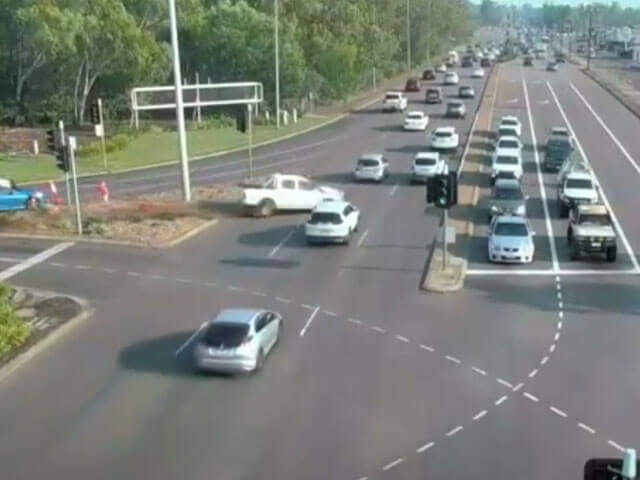 A 33-year-old woman and her two-year-old child suffered head injuries after the car she was driving at high speed blew through a Bagot Road intersection after failing to make a turn, narrowly avoiding a collision with a number of moving vehicles before crashing into a business on the other side of the busy intersection.

NT Police have released CCTV footage of the incident that shows a Toyota Hilux speeding through the McMillans Rd intersection and across six lanes of Bagot Rd and across another service road before ramming into the Cash Converters at around 5pm on Thursday.

One vehicle on Bagot Rd was a near-miss.

Police said the female driver allegedly lost control, failed to negotiate a turn, and crashed into the business.

The driver and her child were taken to the Royal Darwin Hospital with non-life-threatening injuries, police said, although the child is believed to have suffered “serious head injuries”.

It’s understood both the woman and child were wearing seatbelts.

Authorities said they continue to investigate what factors may have caused the incident.

“It is incredibly lucky no-one else was injured in this incident. Drivers are reminded to always drive with due care and attention,” Superintendent Daniel Shean said.