‘I am likely to attract complaints against me’: Raj Rajwin responds to complaints over doctor claims 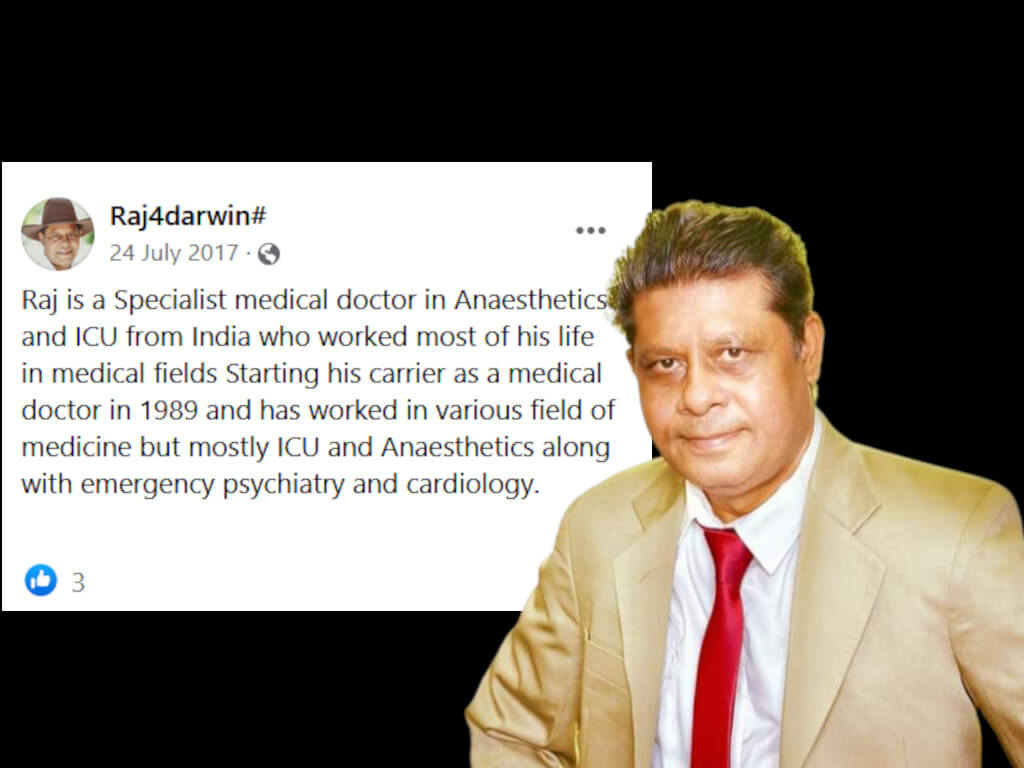 The peak body that protects the public from wrongdoing by health practitioners found United Australia Party candidate Raj Samson Rajwin was a “moderate risk” to the public after a criminal investigation into his claims of being a doctor during a previous election campaign.

Mr Rajwin responded to the 2020 investigation explaining that he did not know how it was “objectionable” and dismissed it as political, but changed his campaign material as a result.

However, the NT Independent has found instances of Mr Rajwin still referring to himself as a doctor and a medical specialist on older campaign material on his Facebook page.

Responding to a complaint about Mr Rajwin, formally known as Tilak Raj, who is a serial election loser at all levels of government, the Australian Health Practitioner Regulation Agency‘s Criminal Offences Unit inspector Aman Donsanjh wrote to the member of the public who complained in November 2020, to say they had investigated and found there was a “moderate risk to the public”, and wrote to Mr Rajwin, saying they deal with such matters ‘administratively”.

This week the NT Independent reported Mr Rajwin has been using at least one fake Facebook profile to attack political rivals and named one apparently non-existent person as the Australian “president” of his “International Society of Human Development and Equality” organisation – a private company he runs as the sole director while claiming it is a charity. Mr Rajwin both acknowledged these issues and disputed them. In the lead up to the Territory council elections in 2021, in which he was running for Palmerston mayor and alderman, Mr Rajwin claimed on the Territory Story podcast that he was previously pre-selected for the CLP at the 2016 NT election. This was dismissed as incorrect by the party’s vice-president at the time. Mr Rajwin said the person who provided the information to the NT Independent was “too stupid to look up records” and had got it wrong.

The NT Independent has seen the letter from AHPRA but the complainant’s name was redacted.

“As a result of your complaint, and in accordance with these practices, we raised the concerns of potential breaches of the national law [Health Practitioner Regulation (National Uniform Legislation) Act 2010] directly with Mr Rajwin, who has taken steps to correct his conduct in order to comply with the national law,” the letter said.

“We are therefore satisfied that there is no ongoing risk to the public that we need to manage.”

When asked about the matter, Mr Rajwin did not respond at first but when asked about it again, he said in a written message that AHPRA were “happy about it”.

“I am looking for the issue from the board about the brochure saying that I am claiming to be a doctor,” he wrote.

“However this was a perception of the complainer a political. I explained it and they were happy.

“The text was edited by an Australian qualified Public heath specialist and now he is PhD. Another one was an Australian English teacher.

“Please read the letter it was closed and it was abiut my brochures for my qualifications misinterpreted as my working status. Qualificationis different . Yes I can state my qualification buy I cant state that I am a doctor means I am working and hold ing registration [sic].”

It was explained to Mr Rajwin the NT Independent had read the letter and told him it was a criminal investigation.

“Criminal for what? it can mean may thing [sic],” he responded

“I didn’t know and still don’t know, how is it objectionable. However I accept to change,” the letter said.

“I am happy to comply with the medical board authorities and will be very thankful to your suggestions.

“AFTER  RECEIVING THIS LETTER I HAVE DECIDED TO CHANGE THE LEAFLETS.

“I am a registered Dr In India.

“CHECKED THE FOLLOWINGS WHERE  I HAVENT USED ANY SENTENCE SHOWING THAT I AM A DOCTOR..

He went on to write that he “knew the following”.

“1. I cant write Dr Raj before I am registered in Australia. I never wrote. I never introduced myself as Dr Raj,” the letter said.

“2. I can give medical advise before I am registered as a medical practitioner. I never gave.

“3. I cant charge for medical advice. I never charged.

“My scenario is very different and uncommon.

“I am a specialist and medical doctor for Indian purpose I came to Australia , passed my AMC [Australian Medical Council] part ! in first attempt , worked as a medical officer in few hospitals in Australia.

“I am married to a Doctor who Father and mother are or were doctors in Australia and probably retired. Her father in law is a surgeon from AIIMS. AIIMS treats all high placed politicians of India.”

He then detailed some further Australian medical education and medical work history.

“AT THE TIME OF APPLICATION FOR PRESELECTION FOR MP I HAD GIVEN MY QUALIFICATION AS ARE SEEN ON MY ALL LEAFLETS TODAY. THIS IS THE REASON THAT ALL LEAFLETS AND INFORMATION SAYS THE SAME THING,” he wrote. “As my qualification and employment history has been known to various politicians and parties and were never questioned I never felt that there is any thing wrong in them, I comply with law of the land. It is first time some one (APRAH) has questioned my display status about my medical status so I am happy to change.”

In the letter Mr Rajwin then grapples with the problem of how he would describe himself, as he said he was still a doctor in India, and provides a few different ways to the agency he could express himself.

He then details how he would identify himself in Australia and deal with people on social media.

“DOCTOR IN AUSTRALIA. This I have written in simple past tense,” the letter said.

“SOCIAL DISCUSSION. I am heavily discussed in social medica, mostly for my medical status. People think I am a fake doctor. I have to explain to them all the times. Most people know that I am registered to practice in India. Many think that I did some thing wrong and was terminated to work in Australia [sic].

“I requested to talk to many news channels to interview me, but they didn’t. I believe they didn’t find value in my interview because this could benefit me rather them. They understood that I am not a fake doctor.”

He then asked the agency to forward the complaint letter to “news channels” so he could be interviewed about it.

“All above party officials and many politicians very well know that I have not been working as a doctor, rather I have a small business,” the letter said.

“Many parties introduce me as a business man. I am trying to organise an online interview on my medical status.

“I will be thankful to you if you can forward your query to the news channel then they will feel interested in interviewing me.

“That interview can clarify what I say about my medical status. I spoke in various Radio, TV and News Interviews and clearly said that I have not been working as a doctor in Australia.

“What ever has triggered this complaint seem to be political.

“I AM A POPULAR OR NOTORIOUS- I am likely to attract complaints against me.

“Anyway, please forward my sadness to the Medical Board. I don’t think anyone can do anything. I have to fight on my own.”