‘Gladys resigned’: Opposition calls for Minister to stand down while ICAC investigates 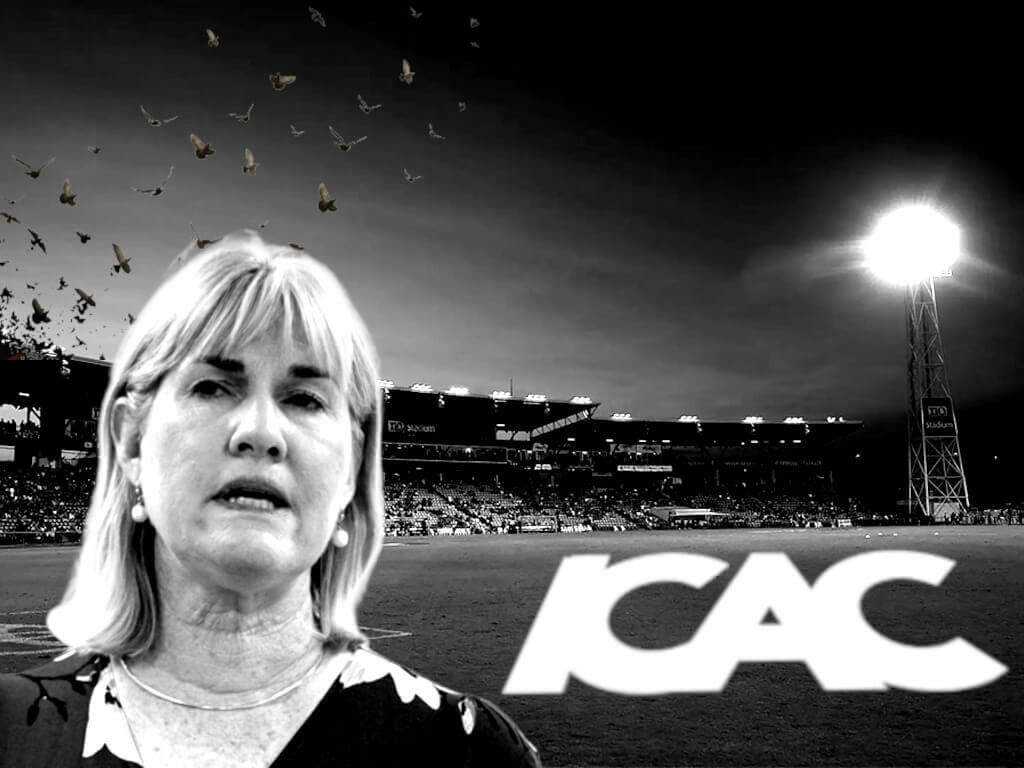 Infrastructure Minister Eva Lawler must immediately stand down while the NT’s anti-corruption commissioner investigates her involvement in the TIO Stadium fiasco, the Opposition CLP says.

Independent Commissioner Against Corruption Michael Riches revealed on Thursday that he is investigating Ms Lawler and the government over unresolved safety issues and building non-compliance at TIO Stadium, which Ms Lawler and her department appear to have allowed to be occupied in breach of the law.

Ms Lawler moved this week to exempt the stadium grandstand from requiring an occupancy permit through a ministerial declaration, despite knowing since at least 2020 that the building was uncertified and should not have been legally occupied.

The exemption, which was declared while Ms Lawler was also aware the ICAC was asking questions about the facility, will permit people to enter the premises despite it not having a permit and before proper rectification works are carried out.

It is the first time the NT ICAC has publicly stated that a current sitting minister is under investigation.

Deputy Opposition Leader Gerard Maley said Ms Lawler’s personal involvement in the affair is grounds for her to stand down while the ICAC investigates.

“Minister Lawler took the extraordinary step of making a ministerial declaration to exempt the TIO Stadium grandstand from operating without an occupancy permit,” he said.

“The Minister needs to explain what advice her department has provided to trigger this decision – and stand down while the anti-corruption commissioner investigates.”

Mr Maley pointed to former NSW premier Gladys Berejiklian who resigned last year after that state’s ICAC announced it was investigating her over an undisclosed conflict of interest.

“Eva Lawler cannot continue to hold the position of Minister while an investigation is underway and should immediately step aside,” he said.

“Former NSW premier, Gladys Berejiklian, resigned an hour after the ICAC announced she was under investigation, Minister Lawler should do the same.”

Ms Lawler refused to answer the NT Independent’s questions yesterday about who advised her to exempt the stadium and why she would do it now, after permitting people to enter for the last two years in breach of the Building Act.

She told the ABC in a statement that “certification is expected to be finalised as soon as possible”, which the department also pledged in 2020.

Department of Infrastructure, Planning and Logistics chief executive Andrew Kirkman and the NT’s Building Controller Mark Meldrum also refused to comment on why they permitted people to enter the stadium while aware it did not have an occupancy permit.

‘What message does this send to private developers?’: CLP

The stadium has been without an occupancy permit since it was built in 1990, according to records obtained by the NT Independent. Efforts to obtain a permit were pursued by bureaucrats in 2009, documents show, but inexplicably discontinued and raised again in 2018 by Mr Meldrum but also not carried out.

An engineer’s report obtained by the NT Independent last year through FOI laws showed the department had failed to fix non-compliance safety issues at the facility, despite pledging to in 2020, and raised the issue of ongoing insufficient fire hydrant pressure issues that could put people’s lives at risk.

The engineer’s report around “base building elements” was redacted by the government, including other mechanical and electrical issues, preventing the public from knowing what specific faults were still not rectified.

Mr Riches told the NT Independent that he had made inquiries over the last few weeks about the government’s management of the stadium’s issues to Ms Lawler, Chief Minister Michael Gunner and Mr Meldrum, among others.

He said Ms Lawler gazetted the exemption for the stadium shortly before he received their responses.

Mr Maley said the government appeared to be abusing its powers.

“What message does this send to private developers in the Territory – who have to comply with the Building Act, and are not in a position to exempt themselves – when the government can’t even comply with its own legislation,” Mr Maley said.

Ms Lawler and Mr Gunner refused to respond to questions yesterday, including whether Ms Lawler would be stood down to maintain the integrity of her department, the government and the ministerial office while the investigation is underway.