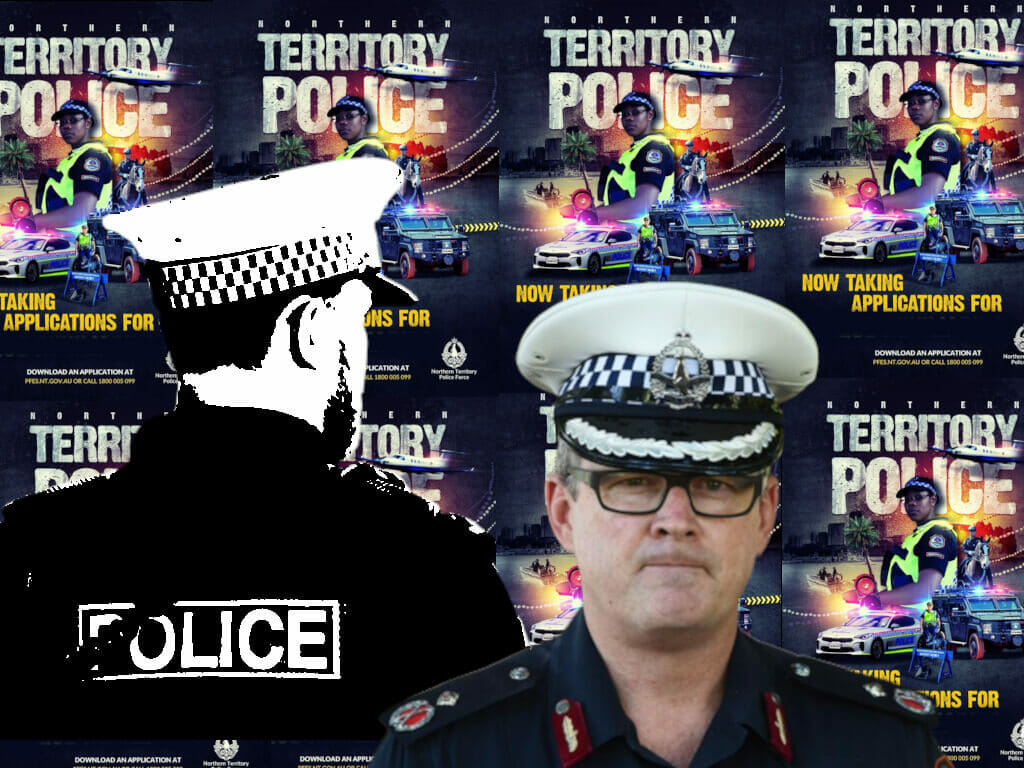 Official figures show one NT Police officer has left the force every two days between late November to mid February, keeping the attrition rate roughly double what it was in the 2019-2020 financial year, a period the NT Police Association referred to as having “one of the greatest resignation rates of police officers in NT history”.

The latest figures, which cover attrition for an 84-day period from November 26 to February 18, show 41 officers left, and includes 11 officers who retired.

Remaining officers have previously been critical of the executive for allowing experienced cops to leave the force and not having enough experience left to train the new graduates on the job.

At least seven of those who recently left were forcibly medically retired by the NT Police executive for refusing the COVID-19 vaccination. They may, or may not have left their roles, if they had not been forced out.

The list however does not include former Alice Springs sergeant Leith Phillips, who resigned on December 7 in a very public way after writing a scathing letter to the Police Commissioner Jamie Chalker, a letter Mr Chalker attempted to discipline him for.

He cited his loss of belief in the leadership and his rejection of some of the chief health officer directions issued under the COVID-19 emergency response.

The list also does not include at least four officers who were forcibly retired, and then reinstated, because they were forced out before their appeals against their retirements were heard.

This had followed a Supreme Court action by another officer who was forcibly retired over an unrelated health matter before his appeal was heard, which was settled out of court by the executive, and resulted in him being reinstated.

However across three graduations, on November 26 , December 23, and February 11, there were 62 new officers come into the NT Police force.

An elevated attrition rate from the 2019-20 financial year

In late October, the NT Police force’s annual report for the last financial year was tabled, showing the attrition rate nearly doubled to 8.51 per cent – from 4.53 per cent in the 2019-20 financial year, and 4.66 per cent the year before.

The November to February period of attrition stays close to that elevated attrition rate.

From September 14, 2021, to November 15, 2021, there were 33 officers leave across a 58-day period, which was a slightly higher attrition rate than the following period.

In a general statement released to the media, NTPA president Paul McCue was scathing of Chief Minister Michael Gunner, who was asked in an ABC radio interview on Tuesday morning if he regretted telling the Yuendumu community “consequences will flow”, in a speech he gave days after Constable Zach Rolfe shot dead Kumanjayi Walker during an attempted arrest.

In response he said: “I see how the [police] union have weaponised it and politicised it”.

“And so if you could go back in time obviously you would say different words and remove that weapon from what the union used in their arsenal in how they fought this case.”

Mr McCue said “once again” the chief minister, was “happy to lay the blame for something he said at the feet of every single police officer in the NT”.

“Those very men and women who put their lives on the line each day to protect him, his family, and every other member of the community,” he said.

“It is any wonder we have seen one of the greatest resignation rates of police officers in history, over the last over years, under his watch, given his attitude toward them?

“It is costing millions of taxpayers’ dollars to employ and train officers to replace those he could do more to keep if it was not for irresponsible commentary such as what we have seen today.”

Chalker claims year ahead full of many challenges

In the NTPA Magazine, where the figures were published, Mr Chalker said the year held many challenges and asked officers to look after one another and ask for support.

“We are constantly working on our commitment to our people and our community.” he wrote.

“Our expectation is that our people perform with the highest levels of professionalism.”

Mr Chalker has still not publicly discussed the police shooting of a man in Palmerston that happened two weeks ago, and played in a police golf tournament in South Australia in the days before the end of Constable Zach Rolfe’s murder trial, while police were preparing for possible riots and unrest in Central Australia.

Also in the magazine, Ms Manison said her focus was always to ensure the government was doing everything it could to support officers on the frontline and that an independent review into well-being was also in its final stages.

“Your well-being is equally as important as your safety,” she wrote. “They are both at the heart of everything we do in acknowledging that the work you do is often high risk, and the experiences you have can be traumatic and distressing.

“Your efforts never go unnoticed and I’m so proud of the work you do every day.”

In November, she told Parliament police officers left the force at double the attrition rate because they are “the best in the nation” and were being actively recruited by other states, despite record low morale in the ranks attributed to poor management.

She offered no proof of her claims at the time.

Also in mid-October, the NTPA’s 2021 member survey showed more Territory cops were seeking a job outside the NT than ever before, with officers citing management issues as their reason for leaving.

In another concerning finding, 64 per cent of officers surveyed said morale was “low or very low”.