‘He was one of the best police officers in Australia’: Colleagues on suspended Detective Sergeant 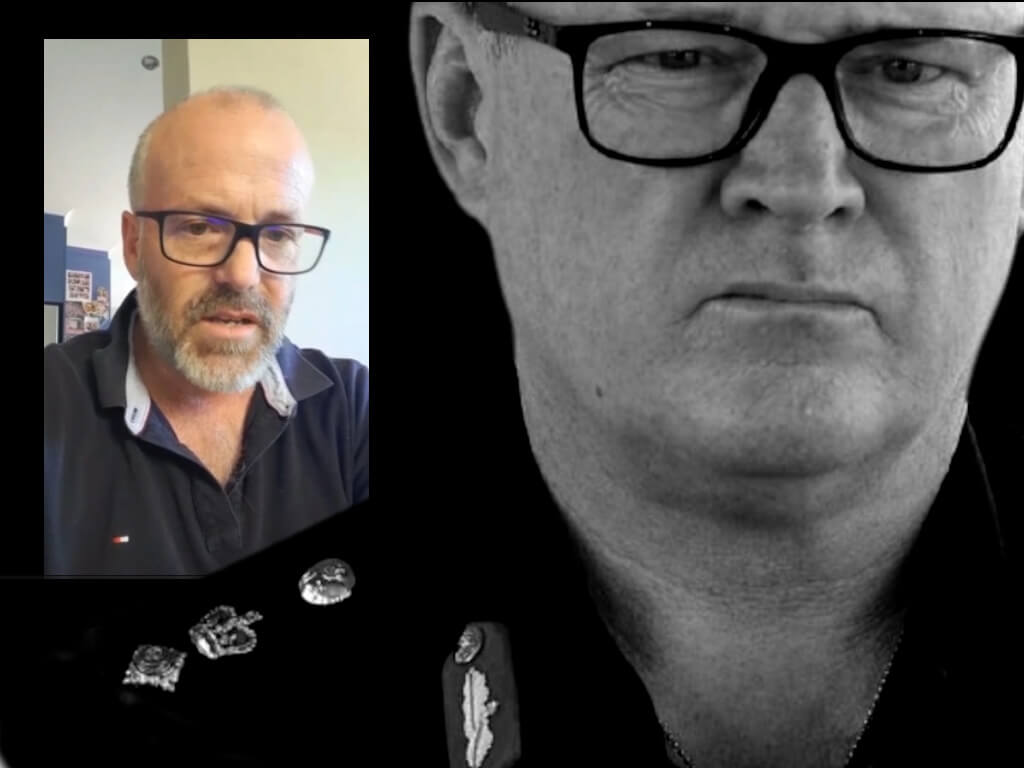 An NT Police disciplinary notice to Detective Sergeant Leith Phillips says the police top brass are taking action against him for his resignation letter to Police Commissioner Jamie Chalker, which they said was “disgraceful and improper”, and claimed his speech to a “COVID-19 freedom” rally diminished the public’s faith in his ability to carry out his role.

However, many colleagues have come to Sgt Phillips’ defence, telling the NT Independent his loss will be a huge blow for Alice Springs policing and that he was the “most ethical officer in town” and “a man of great integrity” who has been mistreated by the executive team.

Detective Sergeant Phillips sent a resignation letter to Mr Chalker on Thursday, citing a finish date of January 3, after 24 years working in the southern part of the Northern Territory.

But he said he was kicked out of the Alice Springs police station on Friday when he went to collect some posessions, and on Saturday Commander Craig Laidler and Acting Commander Kirsten Engels came to his house to hand him a notice for two alleged serious breaches of discipline.

The breach notice states the twice-vaccinated officer engaged in improper conduct while off duty for his speech at the Free in the NT rally in Alice Springs on November 27, and that he contravened the police code of conduct in his resignation letter to Mr Chalker and other police executives as well as other sworn and un-sworn members.

The disciplinary notice written by Acting Commander Kylie Anderson said his actions had the ability to reduce public confidence in him being able to serve and protect them without fear or favour.

Deputy Commissioner Murray Smalpage suspended him without pay for the breaches, and Sgt Phillips has seven days to respond, facing being sacked as a punishment.

In the resignation letter, Sgt Phillips was scathing of Mr Chalker, who he said he has worked alongside, and later defended after he rose to police commissioner. He was also critical of the executive charging Constable Zach Rolfe with murder four days after the shooting death of Kumanjayi Walker when trying to arrest him in Yuendumu in 2019.

“Sir, and I use this honorific purely due to the respect I hold for the office of the Commissioner of Police, not the person who currently holds this position, as I no longer have any confidence in your ability to lead this organisation with respect, honour, and integrity,” he wrote.

NT Police media manager Rob Cross did not respond to a request for a response.

An alleged serious breach for speaking at the ‘freedom’ rally

In the notice, Acting Commander Anderson said there was little doubt a high number of people watching Sgt Phillips’ rally speech, either in person or on video, would have known he was a police officer.

“While you stated that your comments were your own, not a reflection on the employer, but the contents of the speech had the real and actual ability to diminish the public’s faith in [the] ability to carry out your role as sergeant and acting senior sergeant of police,” she wrote.

“Particularly your ability to enforce legislation in relation to the chief health officer’s directions.

“You asserted a lot of members of the police force, whom you described as brothers and sisters in blue, were not for the mandate. You’re not entitled to speak on behalf of other police members.

“While it is accepted that individuals have the right to their opinion, they should not diminish their ability to conduct their duties, nor should their opinion diminish public confidence in the police force to uphold the laws of the Northern Territory.

She pointed out that in his speech he called the CHO directives “draconian” and a “breach of civil rights”.

“You refer to the Chief Minister of the Northern Territory, the honourable Michael Gunner MLA, questioned the quality of his person and his leadership,” she wrote.

“As a police officer in the NTPF you’re required to support the government of the Northern Territory despite your personal beliefs. And you stated at times you are ’embarrassed to do the profession I do, it is not what I signed up for’.”

In the rally speech, he also said he personally wanted a revocation of the NT’s emergency declaration, which would remove the chief health officer’s directives including the COVID-19 vaccination mandate.

Sgt Phillips also said emergency declarations should be reduced back to five-day orders from the current 90-day orders, and the power of the chief medical officer should be severely curtailed into some form of advisory board, and that no employer should be able to discriminate on the basis of medical or vaccination status.

An alleged serious breach for ‘disgraceful and improper’ resignation letter

Acting Commander Anderson wrote in the disciplinary notice that despite Sgt Phillips having accepted a “disciplinary outcome” in August, he sent Mr Chalker the resignation letter.

Sgt Phillips said the discipline she referred to was a meeting with Commander Laidler, who told him not to communicate with the police commissioner, but there was nothing in writing provided to him, and he was not served any documents.

“Your email sets how you are discontented with the commissioner of police, and the police executive, the content of the email is considered disgraceful and improper,” she wrote.

“Throughout your email you refer to a lack of respect you have personally for the senior executive of the NTPF, with a common trend being ‘I no longer have confidence in your ability to lead the organisation with respect, honour, and integrity’.

“Your email was a direct contradiction to the instructions you received on August 12 from a commander not to communicate with the chief of police.”

“Your personal conduct has real and potential ability to bring discredit to the NTPF, as the community we serve expect police officers to lead by example and uphold the laws enacted by the government.”

YOU can read the full email Sgt Phillips sent by clicking here.

‘He was the most ethical officer in the town’: rank and file respond to his suspension

The disciplinary notice also stated that officers, on and off duty, need to be beyond reproach, and officers at Sgt Phillips’ rank were supposed to “inspire others to emulate them”.

“Members should endeavour to be role models for community members. Members should always conduct themselves in a professional manner that is lawful and within the spirit of the code of conduct and ethics,” Acting Commander Anderson wrote.

The NT Independent received several messages about the disciplinary action against Sgt Phillips, and sought out comments from experienced officers and former officers who worked with him.

Of those who spoke to the NT Independent, all said he was was an officer of the highest integrity, that they were against the disciplinary action the police executive had taken, and were appalled how the executive had treated him.

Most spoke on the condition of anonymity because of fears of repercussions against them if they stood up for a colleague against the treatment by the executive.

“In terms of having a moral compass, he is the most true to that in a police officer I have ever met,” one said.

“He’s done 24 years but probably has the equivalent of 200 years of experience. It is such a big loss. It is disgusting. Heaps of officers are disgusted. They are ropeable, the senior ones anyway.

“The loss of him is going to be huge. It’s insane. He has put everything on the line by quitting his job and he didn’t have to because he was fully vaccinated.

In mid September, the NT Police Association’s 2021 member survey results were published and showed more Territory cops were seeking a job outside the NT than ever before, with officers citing management issues as their reason for leaving.

Former Alice Springs police prosecutor Lindsay Westphal, who worked with Sgt Phillips, said he was the most ethical officer in the town.

“I know Leith as a really, really, good operator. Leith is a guy of incredible integrity. He is well liked, and when he was investigating police officers for wrongdoing, his investigation was always 100 per cent impartial.

“I don’t think you will find a single person who would question his integrity at all.

“I knew him before he was a copper. He is a man of great integrity and high ethics. As an individual I found him outstanding.”

Another senior officer who was angry at the way Sgt Phillips had been treated and disillusioned with the NT Police executive generally, agreed he was a person of the highest integrity.

“He is one of the best police officers in Australia,” they said.

A former police officer colleague who worked in Alice Springs but who had experience as an officer interstate, also spoke of Sgt Phillips’s integrity.

“I have worked with Leith and know him and really feel for him. But this really explains the current state of the NT Police, an absolute joke,” they wrote.

“I have many people, close friends and current members, telling me similar situations and the rule by fear that is going on.

“He is of the highest integrity and a real gentleman on the job.

“He is what I would call a by-the-book copper, who really cared about his colleagues and his job. He is a very intelligent and articulate man who has been bullied out from what I understand.”

While another officer contacted the NT Independent in support of Sgt Phillips and to highlight other issues in the force.

“Any officer raising concerns about the actions of the government or senior police are being made an example of,” they wrote.

“We are hemorrhaging members. I cannot be identified or I will be sacked too. Smallpox..I mean Smalpage and others are ruining a once outstanding job.”