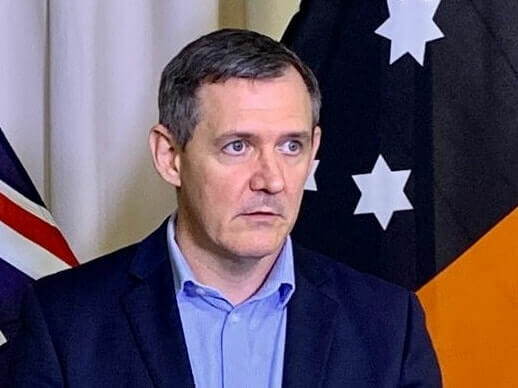 Chief Minister and Treasurer Michael Gunner told a heated Estimates Committee on Monday his government is pinning its economic hopes on a rebound in GST payments, increased mining and gas royalties and potential future major projects to replenish its coffers over the coming years, despite little indication that will happen.

A surplus, Mr Gunner added, will be more than a decade away, as the NT grapples with the economic effects of the COVID-19 pandemic.

The only cost savings Mr Gunner identified to help deal with the record estimated $8.4 billion net debt this year was cuts to public service wage increases totalling $106 million a year over the next four years, which is yet to be finalised despite already being budgeted.

CLP Opposition leader Lia Finocchiaro sustained a high-energy attack on Mr Gunner’s 2020 Budget for hours on Monday, as she questioned the government on debt and borrowings and their plan to repair the budget.

She asked when the government is forecasting a return to surplus, which Mr Gunner initially attempted to answer by referring her to a Budget paper.

“Why don’t you just say it,” Ms Finocchiaro said. “I’m asking you a question, I’m just waiting for [you] to say it.”

“Well, that’s not a year that’s a page number,” she said.

Mr Gunner eventually said there was no surplus expected for more than 10 years, but suggested there had been one forecast for 2027-28 in last year’s budget that was erased due to the COVID-19 pandemic. 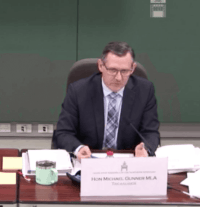 “I think everyone knows that coronavirus came along, we are halving the budget deficit though over the next two years and we have made those tough decisions around the wages policy, again making sure we honour the budget repair plan to do the hard work for Territorians,” he said.

“We’re also expecting an improvement in revenue. Those are two big ticket items: GST improving and the wages policy.”

But the 2020 Budget showed revenue is forecast to drop with mining royalties to recede as well as payroll and property taxes over the next couple of years.

GST payments are expected to be down by $1.6 billion over four years, coming in at $141 million less this year or five per cent less than the 2019-20 figures, according to the actual budget.

He then admitted GST payments to the NT have declined year over year since 2015-16 and will be lower than 2013 levels next year.

“But we expect that’s where it’ll bottom, hopefully, and then start returning to growth,” he said.

Mr Graham said he expected the NT economy to grow through “consumption and investment” brought on by the perennially proposed “pipeline of projects” and defence spending the government is hoping eventually comes to fruition.

Ms Finocchairo said she wasn’t sold and questioned the government’s commitment to controlling its spending.

“So, it clearly seems to me you’re hanging your hat on the pay freeze [for savings] – are you even going to be able to implement the pay freeze given that we’re up for a big negotiation [with the public service union]?” she said.

Mr Gunner said there was “no room to move on” the wages policy he is proposing that he said would see savings of $424 million over four years – or $106 million a year – through implementing a $1000 “bonus” annually instead of a two per cent annual pay increase.

The CPSU has previously said it would fight the proposal.

“That’s just simply what the position is, so we will be implementing the wages policy,” he said, before suggesting it would be part of upcoming negotiations.

How can the debt and deficit be sustainable: Opposition

Ms Finocchairo later asked how a $2.45 billion deficit this year is sustainable.

“We are going to control the virus to grow the economy, and we grow the economy to repair the budget, so that we’ll see an improvement in revenues,” Mr Gunner responded.

“We also have [the] wages policy, for example, which will deliver a significant saving to the bottom line, and we have the deficit as a result of doing that important work. So that, that is our fiscal policy going forward.”

It was not explained how $106 million in forecast savings would substantially affect the $2.45 billion deficit this year or the $8.4 billion net debt moving forward.

“So if controlling the virus is one of your key pillars, you must have a dollar figure associated with that,” she said.

Mr Gunner again pointed to his government’s handling of the COVID-19 pandemic and said “the economy is recovering”, while also pledging to implement a debt ceiling for the NT in next year’s budget but would not provide a figure.