Gunner says he will produce secret China agreement, changes story on what it is Chief Minister Michael Gunner has told Estimates hearings he will table the secret document he signed with an unknown Chinese official while on a state visit to Shenzhen, China in October 2019.

But it is still unclear when exactly it will be made public or what department actually holds it, after Mr Gunner claimed different departments hold the agreement and appeared to contradict his previous claim that it was a “sister cities arrangement” with Shenzhen.

The NT Independent first revealed the document had been signed in June, raising questions over why the Chief Minister had not made the international agreement public.

The Office of Chief Minister last month failed to provide the document, that was requested under Freedom of Information laws, five months after the FOI application was first filed.

The office gave no reason for rejecting the public’s right to know what the Chief Minister signed. It is typical for a leader to announce all official agreements he or she has signed with international leaders at the time of signing. 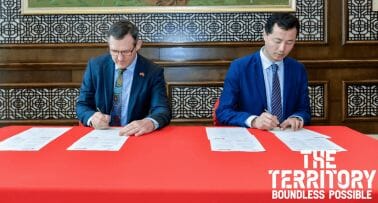 The ongoing secrecy raised concerns with Chinese foreign policy experts who suggested Territorians should be concerned by unannounced agreements entered into with China that aren’t disclosed in Australia.

In Estimates hearings on Monday, CLP Opposition leader Lia Finocchiaro asked Mr Gunner what the document was that he signed and the name of the person he signed it with.

He said he had previously explained the document he signed in Parliament and then told Ms Finocchiaro he would later provide “a copy to the answer I’ve already provided to the House”.

“So you can’t remember, you don’t know, you’re incompetent? I mean how can you not just explain you went to China…” Ms Finocchiaro said before being cut off.

Mr Gunner finally said he would take the question on notice and provide an answer at a later date.

He had previously said in Parliament that the document was a “sister cities arrangement” with Shenzhen.

But he has repeatedly refused to make the document public until now.

Gunner changes story on signed agreement, now says it was a school ‘cooperation document or something’

Ms Finocchiaro asked if he would table a copy of the document by the end of the day.

Mr Gunner appeared annoyed and said the question had “gone well off track from talking about the budget estimates” and suggested the document is held by the newly created Department of Industry, Tourism and Trade which replaced the Department of Trade, Business and Innovation during machinery of government changes implemented after the August election.

“It is unlikely I’ll get a hold of a different department and a copy of that report prior to me completing my time before the Estimates Committee, which I’m saying, if the question on notice is provided, then that’s like, I should be able to do,” he said, later adding it may be held with the Department of Education.

“I think in that instance it was actually a school’s cooperation document or something but they will be able to get it from the Education Department.”

That appears to contradict his claim in Parliament that it was a sister cities arrangement.

An online Chinese language newspaper reported after the 2019 trip that, “His Excellency Michael Gunner and Mr. Liu Qingsheng, Deputy Mayor of Shenzhen, reached an agreement on the future strategic and pragmatic cooperation between the Northern Territory and Shenzhen”.

However, photos of Mr Liu did not match the photos of the man Mr Gunner signed the agreement with.

The Federal Coalition Government is expected to pass its Foreign Relations Bill this week that will give the Federal Government power to terminate any agreements signed by state, territory and local government with foreign governments if found not to be in the national interest. That includes tourism and trade cooperation agreements, education deals and sister city relationships.