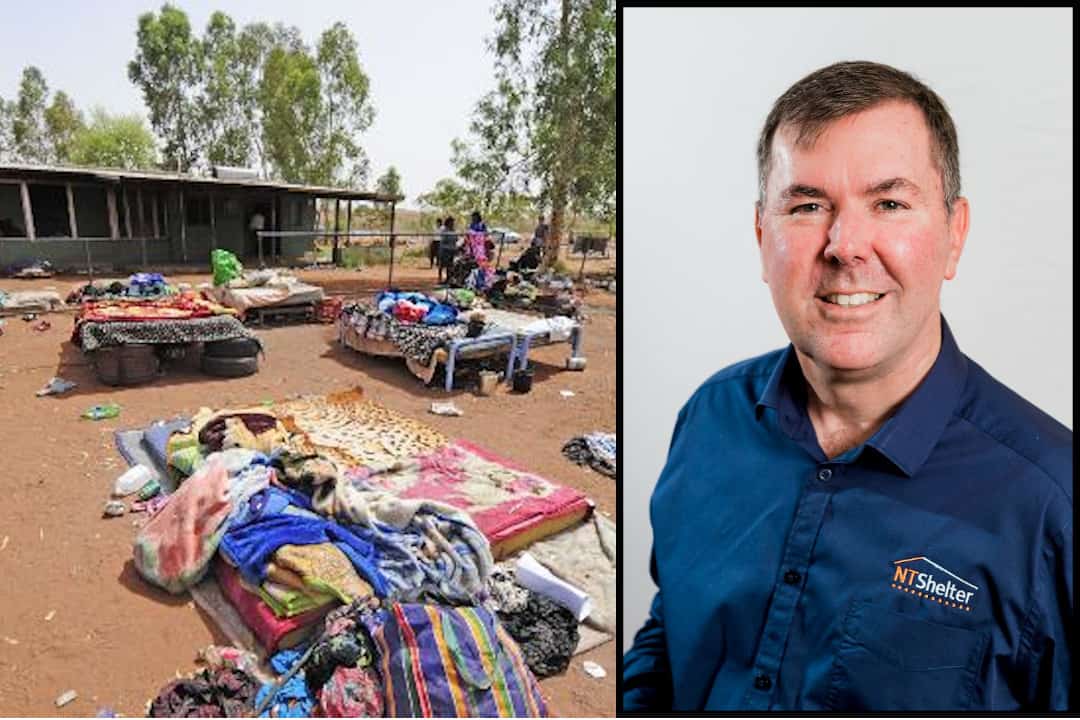 The Northern Territory remains in a housing crisis with more people homeless or living in over-crowded houses than anywhere else in Australia, new data shows.

This crisis is not new but has worsened over decades under a legacy of successive governments who have underinvested in social housing, NT Shelter executive officer Peter McMillan said, sparking renewed calls for meaningful policy to be released ahead of the NT election, less than two weeks away.

“The electorate of Lingiari has the highest rate of homelessness in Australia, that is certainly not something Territorians should be proud of,” Mr McMillan said.

“We are really looking for a substantial response from all the parties in the NT election to address what is really a very significant homelessness and housing challenge.” 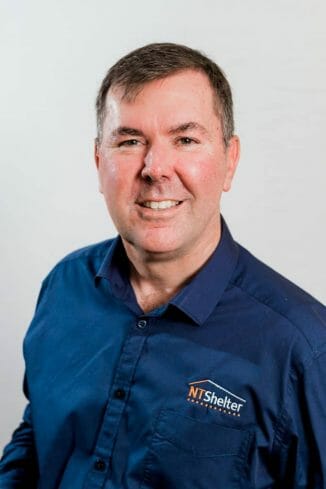 According to the data by Homelessness Australia, within the division of Lingiari, which covers almost the entire Territory, except for the area around Darwin, there is a housing shortfall of 6200, and around 12,300 people are homeless on any given night. At the 2016 Census there were about 110,000 people living in Lingiari in the NT.

Taking Darwin into account raises the number of people experiencing homelessness to 13,720.

In comparison, inner city Melbourne has a shortfall of 4,900 social houses and 2,400 people sleeping rough on any given night.

Mr McMillan said the majority of the Northern Territory’s homelessness problem stems from severely over-crowded houses, mainly in regional and remote towns such as Tennant Creek and Katherine.

Ageing, hot, and beyond repair, these houses can often be sheltering up to 20 people, he said.

“The headaches to government are only going to get worse over the coming years if action isn’t taken.”

Still waiting on election commitments from the Gunner Government

On Friday, Territory Alliance released its policy paper on housing and homelessness, receiving the tick of approval from the peak body for homelessness, NT Shelter.

The paper details commitments to delivering a plan to build 8000 – 12,000 additional public houses by 2025 and increasing funding to the specialist homelessness sector by $2.5 million each year.

It also says it will “press hard” to renegotiate funding and investment for housing and homelessness services from the Commonwealth, with the NT currently receiving the smallest amount despite the rate of homelessness sitting at 12 times the national average.

The paper cites NT Shelter figures that the NT receives $18.9 million or 1.3 per cent of the Federal Government’s National Housing and Homelessness Agreement spending of $1.4 billion. It said that using the national average spending as a guide the NT should have received $170 million. However, the Federal Government has allocated other money for remote housing.

“We think the policy that has been released by Territory Alliance will certainly have Territory Labor and the CLP sitting up and taking notice,” Mr McMillan said.

“It puts this issue firmly in the spotlight for the election and [highlights] it is important that we have a meaningful conversation about what all the parties will do if elected.”

He said the Gunner Government and the CLP are yet to release details of a “significant” election commitment that would tackle homelessness, but there is still time.

“At this stage we haven’t heard from Territory Labor as to what their policy will be on housing and homelessness or indeed if they’ll have a policy, but, at this point, we are very keen to see what they might provide in the coming days,” he said.

The Greens have endorsed NT Shelter’s election asks, which include increased funding to homelessness services, continued investment in remote housing, an additional supply of 250 urban homes per year over the next four years, and delivering enough accommodation infrastructure to meet rough sleeper needs.

A CLP spokesman today said their policy will be released “shortly”.

The Gunner Government’s lack of action, and how a post-Covid-19 stimulus could be the answer

By the NT Government’s own estimates, 8,000 to 12,000 new dwellings are needed over the next five years to tackle homelessness. 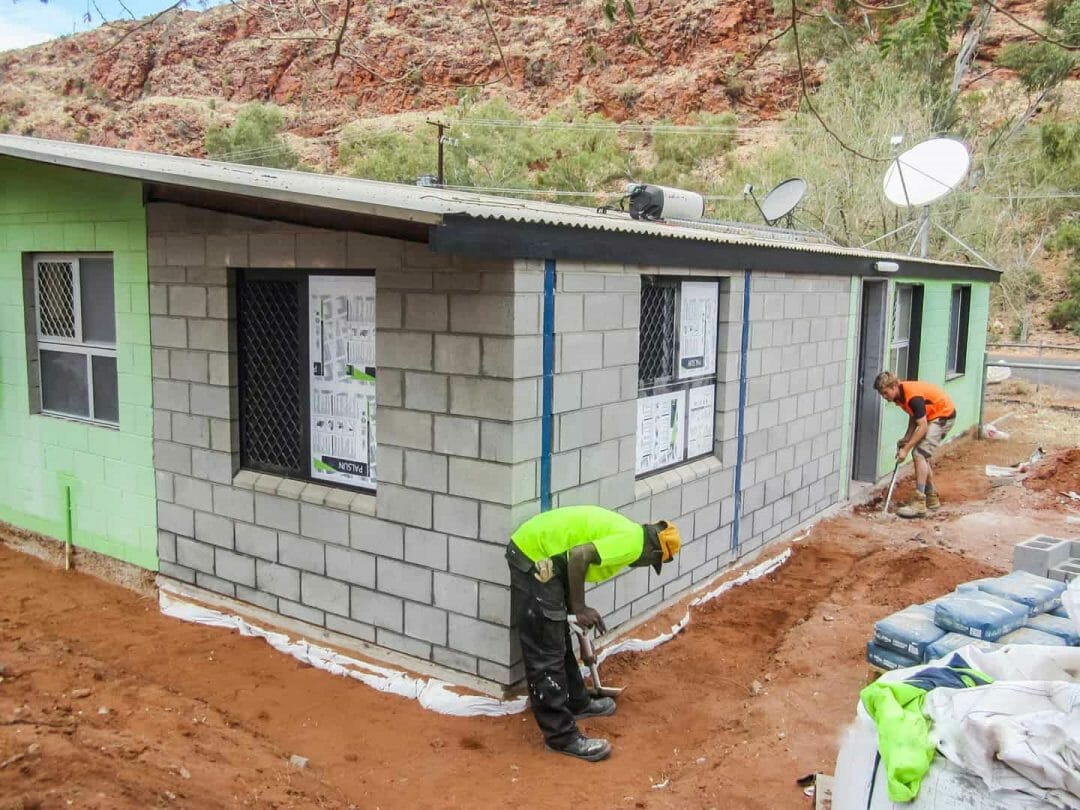 A house being extended in Areyonga, west of Alice Springs, as part of the Room to Breathe program. Picture: NT Government

But Mr McMillan says the rate of construction is not nearly at the level needed to tackle the current housing crisis.

“One of the things we found when we looked at the Department of Housing’s annual reports was… over three years they’ve added a total of 136 extra houses in remote communities and an extra 23 in urban communities,” he said.

Her report found the program had been so poorly administered the government could not have properly assessed “whether its objectives are being achieved economically, efficiently and effectively”.

Ms Crisp’s report also revealed that in two and a half years of operating, only $16.4 million had been spent of the $200 million on actual projects and more than 40 per cent of that cost was attributed to large contract variations after the contracts had been awarded.

In a recent proposal to the Northern Territory Economic Reconstruction Commission, NT Shelter outlined the economic and social benefits of constructing an additional 1,050 homes.

It said the plan would deliver 280 additional full time jobs over four years and inject $340 million into the economy.

“It makes a total amount of sense at the moment to build social housing just as we did after the second world war, when the country is in a situation of economic stagnation and we know we need more housing,” Mr McMillan said.

It is a straightforward proposition: leverage the Federal Government and investor support for construction of social housing through low cost debt finance.

“Bonds are very, very cheap at the moment with low interest rates… that there could be a source of capital for the Northern Territory,” Mr McMillan said.

“[The NT Government] wouldn’t have to find cash to finance the housing builds, but what it would require is the Northern Territory Government to provide land at heavily discounted rates or zero cost to housing providers.

“And we know the Northern Territory Government does have land available… in a situation where we have such difficult financial challenges it’s an opportunity to get finance from Canberra without the NT Government having to front up the cash itself.”

In May, long-awaited plans to open a support centre in Darwin’s CBD were scrapped.

Instead, the NT Government announced it would open a 50-bed short-stay facility for remote visitors in Marrara, about 12 kilometres away.

“Back in October 2018, the Northern Territory Government committed to building three short stay accommodation facilities (one in Darwin’s CBD, a second in Palmerston and the third in the northern suburbs). We would have liked to see more progress by now,” Mr McMillan said.

The decision was met with widespread criticism from the sector, highlighting the need for central accessability. At the time, Leah Potter, who runs the Sunset Kitchen and feeds up to 150 homeless people a night, told the NT Independent the new facility at Marrara would be “ineffective”.

“It’s a stupid idea to put it out at Marrara, no one is going to go there, no one wants to get on shuttle bus out there,” she said.

“The problem is right here in the city, that’s why I set up the soup kitchen.”

The Marrara facility, which has been operating 50 beds on a temporary basis, has been delayed due to leasing issues. The NT Government was contacted for comment.