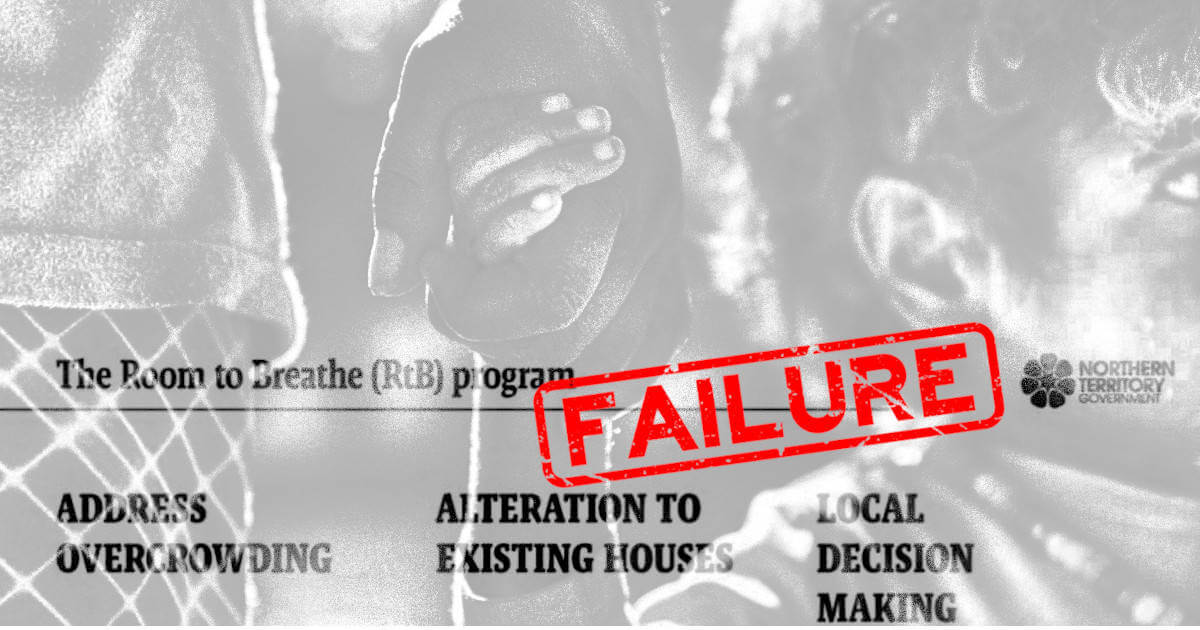 The Gunner Government’s Room to Breathe remote housing program continues to be plagued by massive failures and departmental ineptitude, a new Auditor General’s report has revealed.

The program has been so poorly administered that the government cannot properly “assess whether its objectives are being achieved economically, efficiently and effectively” and that serious changes are desperately needed if it wants “to effectively deliver the program”, Auditor General Julie Crisp found.

The performance audit by Ms Crisp revealed massive internal problems with the program since its inception in early 2017, including improper procurement practices, lack of oversight, lack of key performance indicators, slow rollout of works, large contract variation costs and unsatisfactory consultations with the remote communities the program was purportedly created to help.

It was also revealed taxpayers were billed more money for the Auditor General to probe the program because the department withheld its records of the “early works” portion until after the initial audit was completed.

In a related instance, Ms Crisp’s report found that a “consultant” was hired to write a $24,000 report about the “early works” of the program that was never used.

Slow roll out of works, concerns raised over contract variations

In two and a half years of operating, only $16.4 million has been spent of the $200 million on actual projects and more than 40 per cent of that cost was attributed to large contract variations after the contracts had been awarded.

Ms Crisp found while the $6.9 million in variations were approved under procurement rules, the high amount was cause for concern and “highlights the need for robust monitoring of program expenditure”.

Ms Crisp also found that despite previous procurement audits by her office revealing “significant non-compliance” of procurement rules, the department had not performed any compliance testing on the Room to Breathe program and, as of last September, had still not implemented proper contract management policies.

There was also no procedure in place for dealing with procurement complaints, in contravention of government-wide procurement rules.

“Although minimum guidelines are now in place for the management of contractual records, the agency is yet to formally document and implement contract management policies and procedures,” Ms Crisp wrote.

This is not the first time the department has been found to be failing on the important program.

In 2017, contractors on the ground were reporting that there was no oversight of the works being done through the Room to Breathe program and that contracts were being awarded to hand-picked companies without being advertised.

In 2018, the department attracted controversy for building tin shed extensions onto homes in Ali Curung without consulting residents as part of the poorly documented “early works” of the Room to Breathe program. The tin sheds cost $41,000 each to construct and were later altered, the department claimed.

Then again in 2018, the Auditor General found the department had failed to follow proper procurement rules in awarding dozens of lucrative contracts that lacked documentation or explanations of why certain companies were awarded tenders. Of 31 department-wide tenders selected for audit, 27 of them had deviated from procurement rules.

“An earlier procurement compliance audit at the agency performed through my office identified significant non‑compliance throughout the procurement lifecycle, including procurement activity relevant to the program,” Ms Crisp wrote in the latest report.

The problems with Room to Breathe continued unabated.

While a “project charter” was developed in January 2017 to assist with developing a needs analysis for the “early works” aspect of the program, records show the government hired a consultant for $24,000 to produce a report that was never used because it didn’t meet the objectives detailed in the charter.

The AG’s report also found executive oversight groups met sporadically and changed names regularly with responsibility for the program shifting to different management groups within the department between 2017 and 2019.

The government had estimated the program would target 1093 homes between April 2018 and April 2023. As of September 2019, only 157 dwellings had works completed.

The Auditor General also found the department hadn’t finalised the program’s design guidelines until August 2019 – nearly three years after the Gunner Government announced the program – and that it only had one key performance indicator, that did not include assessing the number of additional living spaces created or the effect the program had on reducing overcrowding in communities.

Notwithstanding the lack of KPIs, the program awarded tenders to get moving on the works a month before the program was formally approved.

“The [department’s] 2016-17 Annual Report reported that a total of 16 ‘dwellings or living spaces’ were completed within a one-month period,” Ms Crisp wrote. “The audit identified a number of deficiencies in handover documentation and outcome reporting.”

It was also found the department could not settle on an agreed cost per dwelling, despite approving projects.

Community consultation with remote residents also did not occur as it should have, the report found, with the community of Epenarra waiting more than 12 months for works to begin after a departmental community visit to discuss necessary improvements.

“I have concluded that the performance management systems within the agency require strengthening in order to enable the agency to assess whether its objectives are being achieved economically, efficiently and effectively and thus enable management to effectively deliver the program,” Ms Crisp wrote.

The Auditor General’s report, which was tabled last week in Parliament, was “impaired” and delayed due to the Department of Housing’s poor record keeping. The department only produced the “early works” documents to auditors after the draft report was released in December 2019.

“This resulted in my authorised auditors having to effectively reset the audit to allow consideration of this newly provided information,” Ms Crisp wrote. “These deficiencies not only resulted in the significant delay of the audit completion but also incurred additional costs.”

After three years of problems, the Department of Housing said in a response at the end of Ms Crisp’s report that they have now “significantly improved” processes.

“The Department has significantly improved the performance management system that underpins the entire Remote Housing Program,” it said, flagging changes to procurement, employment and developing a management plan. It also stated a planning unit has finally been developed to “effectively plan the remainder of the program”.