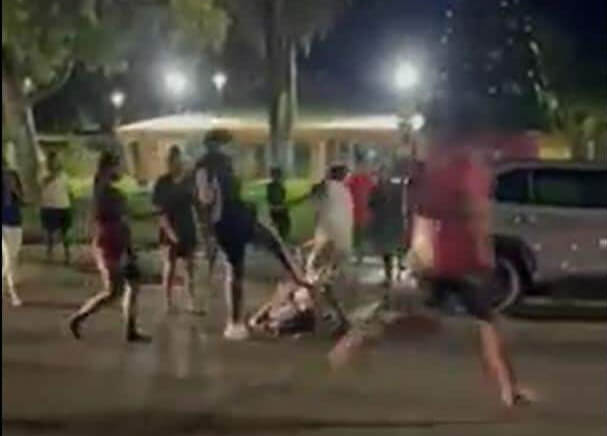 CLP Member for Braitling Josh Burgoyne said the video was “disturbing” and could “only be described as gang violence”.

“The damage crime is doing to Alice Springs’ reputation could be irrecoverable,” Mr Burgoyne said.

“We cannot dream about making our town the thriving hub it once was if youth crime continues and no action is taken.

“The changes we need on bail are in addition to Government’s commitments from June,” he said. “They should implement their promised community work program as soon as possible. We must get on top of this crisis.”

The video was originally posted on the Action for Alice 2020 and had been shared hundreds of times in a matter of hours, attracting hundreds of comments from concerned residents who were outraged and calling for something to be done to make the town safer. Many agreed the town is in the worst state it ever has been and being held hostage by young offenders.

When asked about crime issues across the Northern Territory on radio, Mr Gunner said he has put “more consequences in place” and that everyone is “working extremely hard on this”.

“We have put more consequences in place so that when we catch people who are doing the wrong thing they do go what I believe is a deterrent to break the cycle,” he said on Mix 104.9.

Mr Gunner pointed to “ring leader” legislation which is yet to pass Parliament and a new cattle station being used as a youth diversion work program.

“We are trying different things. There must be a consequence, it must be a deterrent and it must break the cycle,” he said.

But independent Member for Araluen Robyn Lambley said the Gunner Government have shown over the last four years that their approach is not working and renewed her calls for a youth curfew in the town.

“A curfew must be trialled,” she said. “These children are as much a danger to themselves as others. A civilised society must protect their children.

“We are not protecting anyone in Alice Springs at the moment, despite the best efforts of the police and the child statutory authorities.

“Gunner needs to pull his finger out of his behind and get down to Alice Springs and show us some leadership on this serious, serious social problem. The cost of doing little or nothing is a community that is truly suffering, socially and economically, from the impact of crime and antisocial behaviour.”

The video comes as the government recently extended the hours of a youth drop-in centre in Alice Springs to operate 24 hours for Friday and Saturday nights in an effort to get kids off the street. The facility is fitted out with video games, couches, table tennis and a drum kit.

Tanya Morgan, CEO of Alice Springs Youth Accommodation Support services, said her group had not been consulted about the drop-in centre and questioned whether it would meet its objectives.

“It seems to me it could encourage young people who could go home not to go home because there’s something to do all night,” she told ABC Radio Alice Springs on Monday morning. “I just don’t think it should be a space where there’s gaming and television and other things to stimulate them. The 24 hour stimulation is what bothers me.”