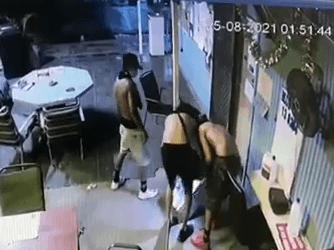 Two teenagers have been charged over car thefts business break-ins in the Darwin CBD, the Waterfront, Leanyer, Palmerston, and Pinelands, with two other alleged offenders yet to be identified, NT Police have said, yet they gave no indication if they were wearing masks, or faced possible COVID-19 infringement fines.

Police media manager Rob Cross alleged in a statement a 17-year-old male, and a 15-year-old male, along with two unknown others, broke into a business in Leanyer at an undisclosed time, and stole two unspecified vehicles.

Blue Taxis has said a taxi and a mini bus were stolen from their Leanyer depot.

Mr Cross alleged they broke into and caused damage at a Temple Terrace shopping centre in Palmerston. The NT Independent has independently confirmed that was the Oasis Shopping Village. 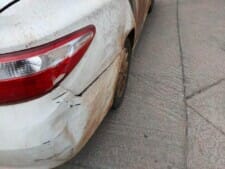 One of the vehicles was abandoned in Malak at an unspecified time Mr Cross said, and he further alleged all four drove to the Waterfront and broke into and damaged another business at an unspecified time before stealing an unspecified amount of alcohol.
Chow restaurant owner Jason Hanna took to Facebook to congratulate police indicating it was his venue that was allegedly broken into. 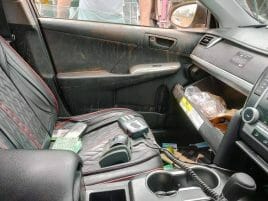 The Blue taxi car after being stolen. Picture Blue Taxis

He said the car was dumped in Leanyer at an unspecified time, and Strike Force Trident detectives arrested two of the alleged offenders on Wednesday.
Mr Cross said the 17-year-old was charged with offences including with four counts of damaging property, five counts of aggravated unlawful entry, four counts of stealing, and one count of unlawful use of a motor vehicle.

The 15-year-old was charged with five counts of unlawful entry, one count of unlawful use of a motor vehicle, and a serious breach of bail, Mr Cross said.

Both were remanded to appear in court today.