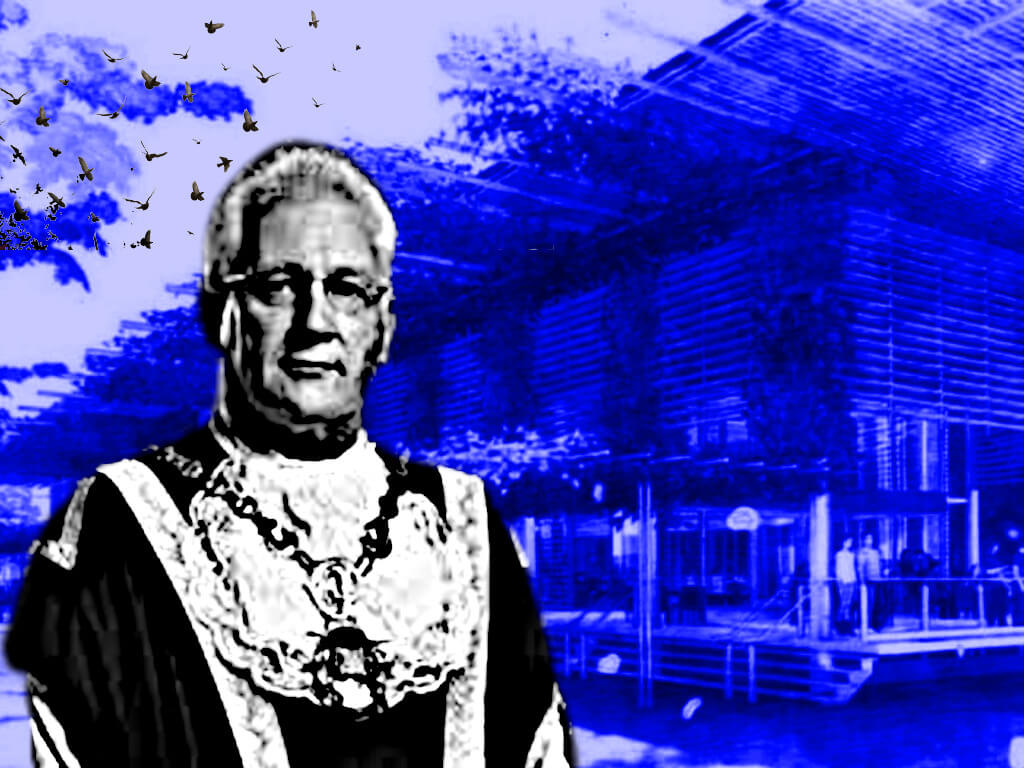 EXCLUSIVE: Darwin Lord Mayor Kon Vatskalis allegedly stopped council from voting on the controversial RSL Esplanade development proposal last October by claiming in a secret meeting of aldermen that it was under investigation by the Independent Commissioner Against Corruption – not because it was on a sacred Indigenous site as originally claimed – the NT Independent can reveal.

Several sources with knowledge of the impromptu briefing, that was not scheduled on the council agenda, said Mr Vatskalis had informed some aldermen about the alleged investigation just minutes before the crucial vote to approve the development at the October 13, 2020 council meeting.

He reportedly also told those present they would be in breach of the ICAC Act if they spoke publicly about the alleged investigation.

However, it is unclear if Mr Vatskalis breached the Act himself by divulging the alleged investigation outside of a formal closed council session that would officially deal with legal issues. Then-acting chief executive Melissa Reiter was also present at the meeting, the sources said.

There are strict orders issued by the Office of the ICAC to anyone involved in, or made aware of, an ongoing investigation that legally forbids them from disclosing the investigation.

It also remains unclear if Mr Vatskalis and Ms Reiter followed proper ethical and legal obligations when Mr Vatskalis prevented elected officials from exercising their duty to vote on official council business by informing them of the alleged investigation and unilaterally deferring the motion.

Questions have also been raised by some aldermen about why Mr Vatskalis later told the public the vote was deferred due to the proposed site for the RSL clubhouse being an Indigenous sacred site – an issue that reportedly would not prevent council from approving the project or halt the development moving ahead.

Hundreds furious vote on development proposal was deferred with no explanation

Hundreds of people had rallied against the RSL’s plan at council chambers on October 13, and left in anger when Mr Vatskalis announced a special “Mayoral Minute” – essentially a motion to delay the vote – with no explanation.

Mr Vatskalis, who had been widely supportive of the proposal, declared publicly at the time that he had received “vital” information about the RSL proposal just before the meeting, but failed to disclose the nature of that mysterious information.

He also did not reveal details when asked by reporters after the meeting.

But the next morning Mr Vatskalis appeared on local radio stations to declare that the motion was deferred because “a friend” and Larrakia Nation elder Bilawara Lee had informed him the land was of cultural significance to traditional owners.

Some aldermen the NT Independent spoke with declined to comment on what was discussed in the impromptu meeting before the regular council meeting.

Others said they would “neither confirm nor deny” that Mr Vatskalis made the ICAC investigation claim.

Outgoing alderman Robin Knox said she would not disclose what was discussed in the secret meeting, even though that meeting was not an official closed session of council.

She said she declined an ABC Radio interview request the morning after the meeting, stating that she was not permitted to disclose why the vote was deferred. She was told then that Mr Vatsaklis was scheduled to appear on the program to explain.

“He obviously didn’t talk about what was ‘in confidential’, but he did talk about Bilawara Lee’s matter.”

Fellow outgoing alderman Simon Niblock backed up Ms Knox’s account, saying he too could not reveal what was discussed in the informal meeting “for legal reasons” but that the nature of the discussion did not centre around a sacred site claim.

At no time during the ABC interview did Mr Vatskalis indicate there were other concerns that prevented council from voting on the motion.

“We were ready to make a decision, I was looking forward to finally making a decision,” he told ABC Radio Darwin the morning after the deferral.

“But at five o’clock I got a phone call about the cultural significance of the site.

“It blew me away and I fell off my chair.”

He claimed because he had received the information just before the council meeting, he needed to verify whether it was a sacred site before council could vote on the matter.

“We had a big problem on our hands so we had to postpone the vote,” he said.

He added that council would be investigating the sacred site claims further.

However, questions to council administration about where that investigation stands at the moment went unanswered on Tuesday and Wednesday. Aldermen the NT Independent spoke with said they believed council had not progressed that investigation.

Other members of the Larrakia community told ABC last October that there are culturally significant sites in the “vicinity” of the site, but that they wouldn’t prevent a development from moving ahead.

“Should it get approved, the council and the developers have to go through a consultation process through the Aboriginal Areas Protection Authority (AAPA) and they don’t stop the development, they just put safe guards in place,” Larrakia community leader Sue Roman told ABC last October.

“The area they’re talking about is not a significant area.”

The AAPA said this week they have never been approached about determining the cultural significance of the current parking lot site near the Cenotaph.

“The AAPA has record of a number of sacred sites, including a women’s site, in the vicinity of the proposed RSL development on the Esplanade,” CEO Benedict Scambary told the NT Independent.

“Sites along the Esplanade have previously been protected by AAPA, whilst allowing development.”

Ms Lee told the NT Independent that while she stood by her claim that the Esplanade site that is currently used as a parking lot near the Cenotaph overlooking the Deckchair Cinema is a “sacred birthing site”, she said she could not recall when precisely she notified Mr Vatskalis of the site’s significance.

Despite widespread media coverage of the controversial proposal in the weeks leading up to the council vote, she said she had not heard about it until the day of the meeting.

“I rang straight away – he didn’t know until I told him,” she said.

“He was pretty shocked and wanted to check it and do what he could to preserve a Larrakia sacred site.”

Ms Lee said she called Mr Vatsklais to inform him of the cultural significance of the site because she “wasn’t going to have drugs and alcohol and military people stomping on my sacred site”.

She ended the interview with the NT Independent shortly after, saying she was no longer “comfortable” answering questions about her discussions with Mr Vatskalis.

The NT Independent reported on October 18, 2020 that Mr Vatskalis had deferred the vote based on a letter of a legal nature he received, not the sacred site claims. Mr Vatskalis did not respond to those questions, but denied it when asked on radio in the following days.

“Well, if they’ve got the legal letter they put it on the table, [in] the newspaper, because there’s no legal letter,” he said on Mix 104.9.

It remains unclear whether Mr Vatskalis was issued a gag order from the ICAC about the alleged investigation.

A spokeswoman with the Office of the ICAC told the NT Independent that Commissioner Michael Riches “does not intend to comment on matters that may or may not be the subject of investigation”.

“Unless he makes a public statement or report under the ICAC Act or conducts a public enquiry,” she added.

A council spokesperson said in October that “any deliberations of council, held in its confidential session, remain confidential.”

But because the secret meeting where Mr Vatskalis claimed the ICAC was investigating was not a properly scheduled meeting with an agenda, and had not been officially called, it does not appear it was a “confidential session” of council.

The NT Independent understands the matter of an alleged ICAC investigation into the RSL development has not been raised again in any official closed or open council meetings or placed on any agendas.

Ms Reiter declined to answer the NT Independent’s questions, including when she was made aware of the sacred site claims or if she or Mr Vatskalis sought legal advice before reportedly disclosing the alleged ICAC investigation to the aldermen in attendance at the briefing.

“Council’s meeting on 13 October 2020 was convened in accordance with the Local Government Act 2008,” she said in an email.

“Matters relating to interactions with ICAC are confidential.”

Mr Vatskalis did not respond to 14 questions posed by the NT Independent about his role in preventing council from voting on the RSL proposal, including how he knew about the alleged investigation.