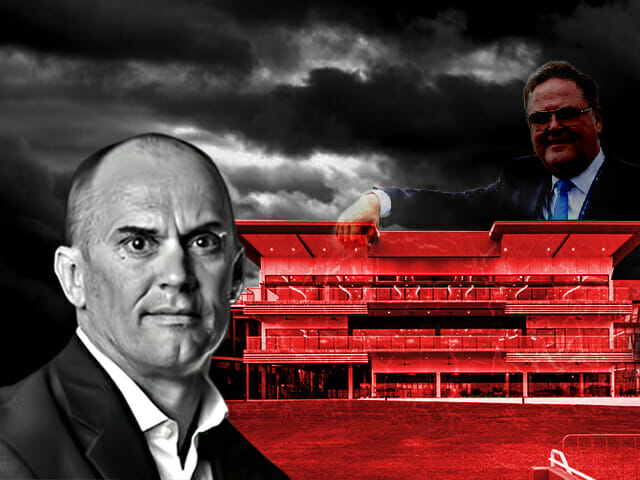 EXCLUSIVE: Darwin Turf Club chief executive Brad Morgan has resigned after two years of turmoil at the club and while it struggles to find a way to pay back the $12 million it was gifted by the Gunner Government to build the controversial grandstand.

Mr Morgan announced his resignation to club chair Richard O’Sullivan last Friday in an email seen by the NT Independent, which some members say has thrown the club into “chaos”, and comes amid speculation that he is leaving to work for former chair Brett Dixon.

Mr Morgan outlines various reasons for his departure, including personal conflicts with “several members of the board” and a new “business opportunity in the private sector”, but stressed that his decision to leave was “made prior to the recent advice from TRNT (Thoroughbred Racing NT) that the NT Government were pursuing with the claw back of the funding received for the construction of the grandstand”.

Mr Morgan added that his two years in the role had been “the most turbulent in recent history of the DTC”.

The NT Independent understands negotiations have commenced between the NT Government, the Turf Club and TRNT around the club paying back the controversial $12 million of public funds the Chief Minister and his Cabinet approved for the grandstand that became the focus of a major corruption investigation by the ICAC.

In the wake of last year’s damning ICAC report, Michael Gunner said he expected the money would be returned to taxpayers, possibly through a reduction in grant funding to the club over an unspecified period, but took no responsibility for giving the money to the club based on a flawed business plan that he himself took under the arm to Cabinet in 2019.

The club then awarded the $12 million to former chair Brett Dixon’s company Jaytex to build the grandstand, resulting in adverse findings against Mr Dixon, the board and others.

Mr Dixon, the club and former board member Damien Moriarty are currently challenging those findings in court.

Morgan expected to work for Dixon after leaving Turf Club amid turmoil: Sources

In his resignation email, Mr Morgan said he was considering a move to the private business sector for “some time” and that it recently became “more attractive”.

“Being totally transparent I have also been considering a business opportunity in the private sector for some time that now has become more attractive and gives me more autonomy to make decisions based on my own strategies,” he wrote.

Turf Club insiders the NT Independent spoke with said they believed Mr Morgan will be going to work for Mr Dixon, who yesterday announced he and a consortium of friends will be purchasing the Hidden Valley Tavern and would be spending $1.5 million to upgrade and refurbish the pub which is directly across the street from his corporate park.

The NT Independent understands Mr Dixon has also purchased a restaurant in his corporate park.

Mr Morgan also did not respond to questions.

In his Turf Club resignation email, Mr Morgan said that constructing and opening the Silks Lounge and the grandstand during his tenure had been difficult given the challenges “in a  time of massive staff shortages”.

He added that he had experienced conflicts with certain current board members that he did not name, but said having opposing views with the board members “would be extremely difficult” for “long-term planning”.

“Therefore, in the best interests of the Club I am advising of my intentions to resign from my position of CEO of Darwin Turf Club to allow the board to move forward without the continual conflict between board and management,” he wrote.

“Please do not interpret this decision as one of a petulant CEO not getting his own way, I do acknowledge that I have received support from the majority of the board since the election in August 2021 and this decision is an accumulation of several matters I have grappled with for some time.

“I wish all board members the best for the future.”

Mr Morgan is expected to remain in the role until after club’s annual general meeting in May.

Current chair Richard O’Sullivan did not respond to questions, including the state of the club’s finances and if it can afford to pay back the $12 million grandstand grant.

In a statement released by the club on Thursday afternoon, he thanked Mr Morgan and said his “leadership over the past two years and throughout the most challenging time in the club’s history has been first-class, and we wish him the very best in his pursuit of future business opportunities”.

Mr O’Sullivan made no reference in the statement to the financial position of the club.

Mr Morgan was quoted in the statement saying there had been positives for the club over the last two years that he was involved in, including the construction and operation of Silks and the running of the last two COVID-impacted Darwin Cup Carnivals.