The Gunner Government: A collision between Budget misuse and democratic responsibilities – Part I 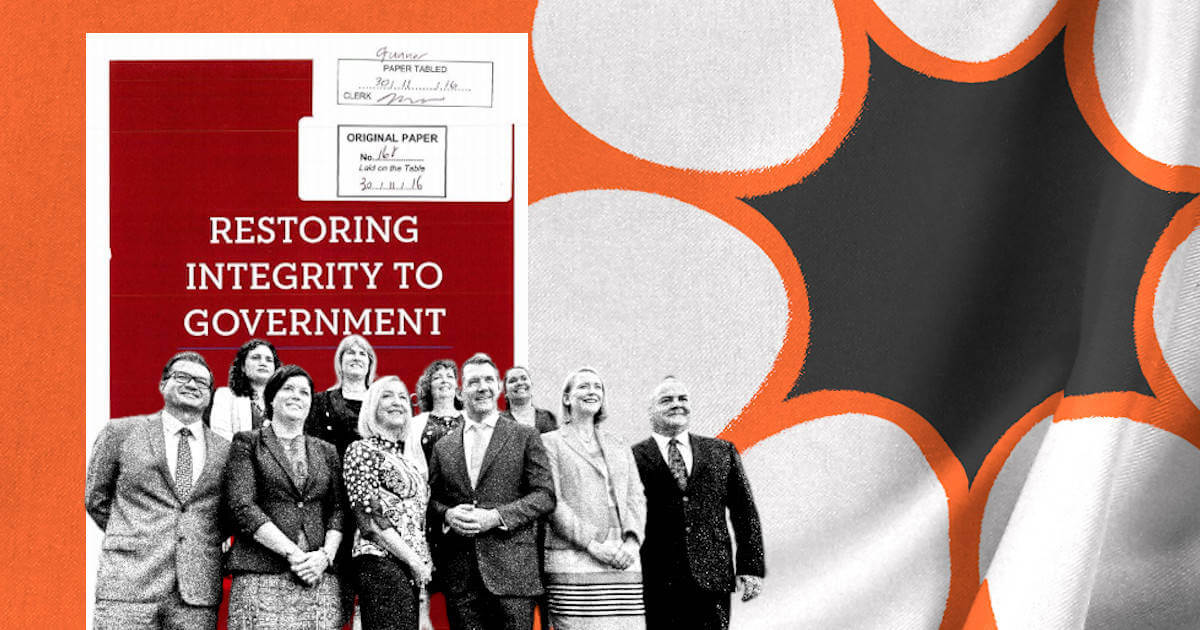 This is the first of a five part presentation of an essay by Dr Don Fuller looking at the characteristics of good government including the principles of transparency and accountability and how the five core attributes of good government make for the foundation of strong economic and community development. Dr Fuller then uses these characteristics to evaluate the Gunner Government, which swept to power in 2016 and famously tabled a document to Parliament entitled, Restoring Integrity to Government– Trust and Integrity Reform Discussion Paper.

First, it can manage budgets efficiently and effectively. Second, decisions related to budget expenditure are accountable, transparent and honest. Third, decision making is seen to be ethical. Fourth, the Government is responsive to community input and suggestions and actively encourages input. Finally, good governments are good at communicating with the community.

Accountability and transparency are key tenets of good governance. Public accountability requires office holders to provide clear and honest explanations for their actions and decisions.

In general, a Government needs to be accountable to those affected by its decisions.

Transparency requires that information should be provided in easily understandable forms. It should be freely available and directly accessible to those who will be affected by Government policies and practices, as well as the outcomes that result from Government decisions. In addition, decisions taken and their enforcement need to be seen to be in compliance with established rules and regulations.

The International Monetary Fund defines fiscal transparency as “the clarity, reliability, frequency, timeliness, and relevance of public fiscal reporting and the openness to the public of the Government’s fiscal policymaking process.”

Raising, allocating, and spending public resources are among the primary functions and policy instruments of Government. Government budgets and how they are managed profoundly affect economies and society.

·      The proliferation of good governance norms and standards that emphasise greater transparency, participation, and accountability in all Government matters,

·      Transitions from closed, authoritarian political regimes to ones characterized by policy contestation, separation of powers, political party competition, an organised civil society, an engaged citizenry, and an active media,

·      The introduction of modern public finance management systems, and

·      The rapid growth, spread, and use of information and communication technologies around the world.

The way in which political decision making takes place within a Government can have a major impact on shaping whether transparency, participation, and accountability actually occurs in an effective manner in Government decision making.

For example, political decision makers who benefit from a lack of accountability and transparency by shifting public funds to their political supporters or preferred projects often hold powerful positions and are well organized to defend their interests.

On the other hand, those who would benefit from increased openness and inclusion in fiscal processes and practices are typically numerous and poorly organized. They may for example, include Government officials who have been excluded from the budget making process and citizens who use and pay for public services such as health, housing, education, and transportation but are excluded by a lack of information.

Why is Government accountability so important?

Accountability is fundamental to the ideals of democracy, the rule of law and essential to good and responsible governance. It has become a core value in measuring the performance of Governments and administrations.

The nineteenth century English politician Benjamin Disraeli wrote: “All power is a trust; that we are accountable for its exercise; that from the people and for the people all springs, and all must exist”.

More recently, the secretary general of the Organisation for Economic Co-operation and Development (OECD), of which Australia is an active member, stated: “Openness and transparency are key ingredients to build accountability and trust, which are necessary for the functioning of democracies and market economies. Openness is one of the key values that guide the OECD vision for a stronger, cleaner, fairer world”.

The A collision between Budget misuse and democratic responsibilities essay

Such confidence and trust can only be achieved with adequate levels of Government accountability.

Government accountability requires the Government to demonstrate competence and honesty in a manner that allows the public to judge how trustworthy the Government is, particularly in the use of public money.

The prevention of corruption in the public sphere, and the effective monitoring of the fiscal responsibility of Government have become key values of public accountability.

·      There needs to be timely, accurate, adequate and relevant information made available on the decisions and actions of Government.

·      There should be external, independent institutions able to examine, evaluate and report on Government processes and decision making.

The first two points are essential to ensuring that people can become aware of the reasons for decisions by Government. This is often referred to as a need for Government ‘transparency’.

Instruments such as Principles for Integrity in Public Procurement, the Best Practices for Budget Transparency, the Principles for Transparency and Integrity in Lobbying and the Guidelines for Managing Conflict of Interest in the Public Service not only help mitigate corruption risks but also improve efficiency and ultimately contribute to public trust.

It is on these fundamental principles to constitutional, democratic government that this series of articles will examine the performance of the Gunner Government since assuming office in August 2016.

In particular, there will be a focus on budget accountability and transparency given they are both essential to the proper functioning of an ethical, democratic Government.

Why do we need Government transparency?

Transparency ensures that information is available that can be used to measure Government performance and to guard against possible misuse of powers.

Transparency therefore serves to achieve accountability. Fundamentally this means that authorities can be held responsible for their actions.

Without transparency and accountability, there will be a lack of trust between a Government and those whom it governs. In severe cases this can lead to the breakdown of Government, social order and key institutions in society. The result of such social instability leads to an environment where economic development is severely curtailed and affected.

A lack of transparency can:

·      Facilitate the ability of public representatives and Government officials to not act in the public interest.

·      Create informational advantages for privileged groups, by which they may profit.

·      Limit the ability to select for honesty and efficiency in public sector positions and contract partners; and hinder social trust, and therefore development.

Many of these points have served to undermined community trust in Territory Governments since self government.

Good governance therefore requires credible and trustworthy institutions built on an effective adherence to the key principles of transparency and accountability.

Are accountability and transparency good for economic development and growth?

International experience, and that from research, shows there is a strong positive correlation between accountable and transparent Government and the sustainability of economic and community development.

Nobel laureate Douglas North’s historical analysis of the transition from less developed countries to open societies shows how economic and political development are far more sustainable in jurisdictions that have open and transparent Government systems.

Is it likely then, that a limiting factor to on-going Territory economic and community development can be traced to increased problems with Government accountability and transparency?

Likewise, numerous cross country studies show the negative impact of corruption on growth and investment.  For example, a study by Aidt et al. of 70 countries indicated that countries with higher quality institutions experience higher growth and lower corruption. It further estimated that countries moving to high quality institutions had an economic and employment growth premium in both the short and long run.

In a presentation to chartered secretaries, the Western Australian Ombudsman stated that appropriate standards of Government accountability and transparency were essential for creating the most prosperous, productive economies – that allow individuals, businesses and Governments to create the highest possible standard of living for the highest possible number of people.

If then, the Gunner Government has been found to be wanting in these key areas of Government accountability and transparency, it is, following this view, likely the standards of living of Territorians have been compromised and prevented from reaching their full potential.

In a recent 2019 Prosperity Index, the Legatum Institute assessed 167 countries, representing over 90 per cent of the world’s population, in terms of a series of measures, such as:

·  Whether a country possesses “an honest and effective Government that preserves order and encourages productive citizenship” and whether it features a “transparent and accountable governing institutions that promotes economic growth”.

In the 2019 index, Australia finished twelfth behind Canada and the United Kingdom and well behind New Zealand in fifth place.

One can only surmise where the Territory would have ended up on such a scale.

What becomes apparent very quickly about those countries at the top of the prosperity index is that they are countries that are not just prosperous, but enjoy high levels of economic and personal freedom, respect for the rule of law and high levels of accountable and transparent governance.

The Legatum Institute notes that “the foundations of prosperity reinforce each other” and goes on to say that “countries in which sound governance creates satisfied citizens are also the most likely to have the healthiest economic fundamentals and the most entrepreneurial societies”.

Numerous studies have shown there is a very strong correlation between prosperity, the rule of law, democratic institutions, respect for economic and personal freedoms and good governance hallmarked by accountability and transparency.

High levels of accountability and transparency, especially related to the expenditure of public funds, is therefore essential to political, economic and community development.

An apparent lack of appreciation of the important linkages between accountancy and transparency and economic and community development has been one of the main on-going criticisms regarding the performance of the Gunner Government.

In a keynote address a director of the World Bank stated recently that it is ‘the citizens’ right, but also their duty, to demand adequate Government accountability and transparency.’

As distinct from a democratic state a key feature of an authoritarian political system is that there is little accountability or transparency of Government decision making.

As pointed out by the researcher Marlies Glasius in the Journal of International Affairs, the reasons for citizens encouraging a high level of transparency and accountability is that it ‘shines a light’ on the potential for authoritarian political behaviours, where Governments do not respect the need to explain and justify their conduct. Accountability and Transparency is necessary then, to prevent the ‘domination’ of citizens by Government in authoritarian type political behaviours.

Authoritarian practices she argues enable and encourage domination by politicians. Such behaviours include substantive and procedural rule-breaking. They also interfere with community preferences and inhibit the civic virtues of those to whom accountability is owed. Information flows are strictly controlled.

Firms are much less likely to invest in a region where it is not clear on what basis Government makes important financial decisions. Firms are also concerned where resources are seen to be wasted by a Government not following proper budgetary and democratic principles requiring high levels of accountability and transparency.

Part II of the essay will look at the Gunner Government’s tabling in the NT Parliament in November, 2016 of the document, Restoring Integrity to Government– Trust and Integrity Reform Discussion Paper, following wide community concerns regarding questions of accountability, transparency and budget decision making under the Giles Government. Then Dr Fuller begins to evaluate whether its early actions matched its words.

Dr Don Fuller holds a first class Honours degree and PhD in economics from the University of Adelaide. He has worked as senior public servant in the Territory. This included as a senior economic advisor to Northern Territory chief ministers. He was also Professor of Governance and Head of the Schools of Law and Business at Charles Darwin University. He grew up in Darwin and attended Darwin High School.