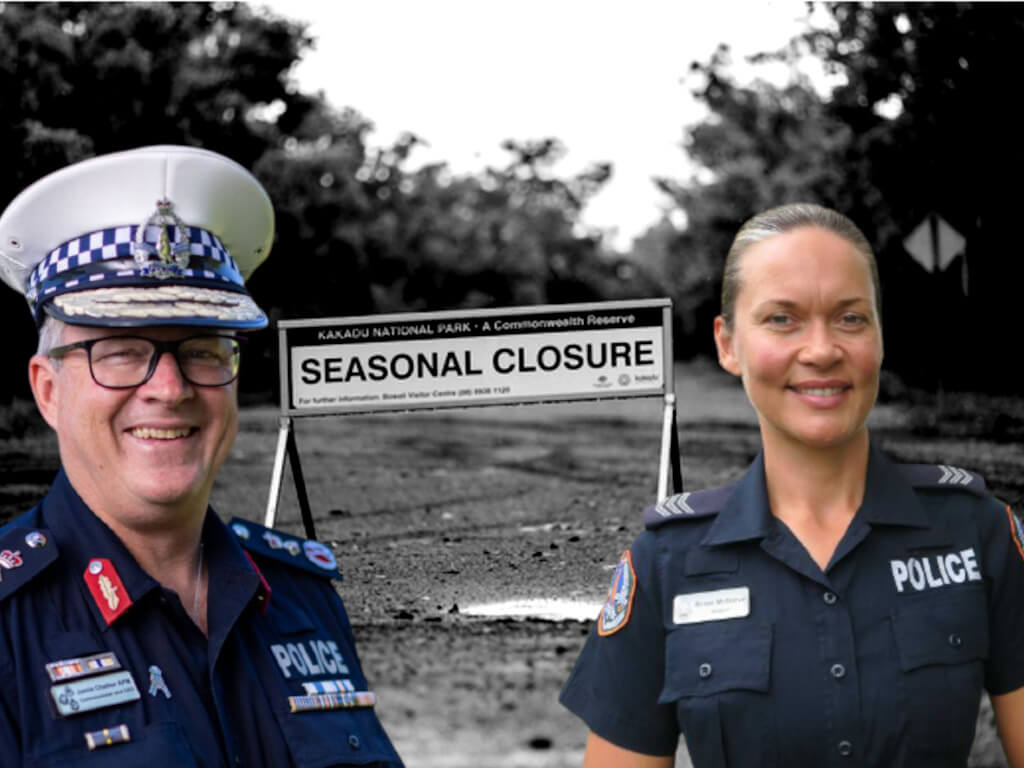 An NT Police superintendent was among four people who allegedly bypassed a locked gate and a road-closed sign in Kakadu National Park, resulting in a helicopter rescue after getting trapped by rising water, sources have told the NT Independent.

Acting Superintendent Renae McGarvie is said to have driven along Gimbat Rd, which leads to Gunlom Falls in the southern end of the park, with her partner last Wednesday.

Several sources said there is a sign at the turn off from the Kakadu Highway stating the area where the couple was going was closed for the Wet, followed by a temporary road closed sign across the road further along, and finally locked gates before a single lane bridge across the South Alligator River, just where the road hits a T-intersection, which in one direction goes to the falls.

“They got caught by rising waters, couldn’t get back out, and had to use the park’s emergency phone,” a source said.

“They got choppered back out and back to her car. The sheer arrogance that she thinks the rules don’t apply to her.

“Imagine the costs of the chopper.”

The source said Supt McGarvie and her partner parked before the South Alligator River bridge and walked around the locked gates before going hiking.

Another couple also drove into the area independently around the same time, a second source said, and all four became stuck when rainwater coming off the escarpment led to the river quickly rising about 2.5 metres, trapping them, and forcing them to spend the night in the park.

The couple had driven their car through the river before the rain fall, cutting off the bridge, and it was stuck on the other side,

The second source said the couples had put themselves in danger by ignoring all the warning signs to go for a hike, and also put pressure on stretched ranger resources.

“You could not say it was an honest accident,” they said.

“If you are driving someone and there is a road closed sign across the road, you are walking around a locked gate, and where you come off the highway there is a sign that tells you the sites are closed.

“They put themselves in danger, but also put pressure on stretched Parks resources, and having to rescue them, means they cannot be out doing other work.

“Someone breaks the rules in the park it is under federal legislation, and the NT road rules, yet nothing happens.

“There are a lot of angry members out there. People have been given section 79s (disciplinary notices) for a lot less.” The first source said after being rescued, Supt McGarvie and her partner got bogged after he failed to put their vehicle into 4WD and they had to be pulled out.

NT Police did not issue a media release about the rescue, or the alleged law-breaking, and media manager Rob Cross did not respond to questions about potential charges over the incident or disciplinary action against Supt McGarvie, or how not reporting the incident fitted with NT Police’s own transparency guidelines.

In September, Police Commissioner Jamie Chalker said no disciplinary action would be taken after Deputy Police Commissioner Murray Smalpage “inadvertently” recorded himself suggesting that a group of police officers should be called a “murder” and live-streaming it to Facebook. 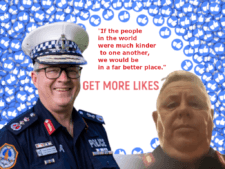 Parks Australia did not immediately respond to a request for comment about the helicopter rescue of Supt McGarvie.

According to media reports, Supt McGarvie has been an NT Police officer since 1998 and in 2018 was awarded the Australian Police Medal. She also marched with police in New York on the 10th anniversary of September 11.

Her APM biography states she was awarded the Patricia Anne Brennan Award in 2014, recognising significant contribution to women in the Police, Fire and Emergency Services, and in 2011 and 2013 she competed in the World Police and Fire Games in New York and Belfast.

Gunlom Land Trust chairperson Mick Markham told the ABC in May custodians wanted Gunlom Falls to remain closed to the public until the end of the legal action.