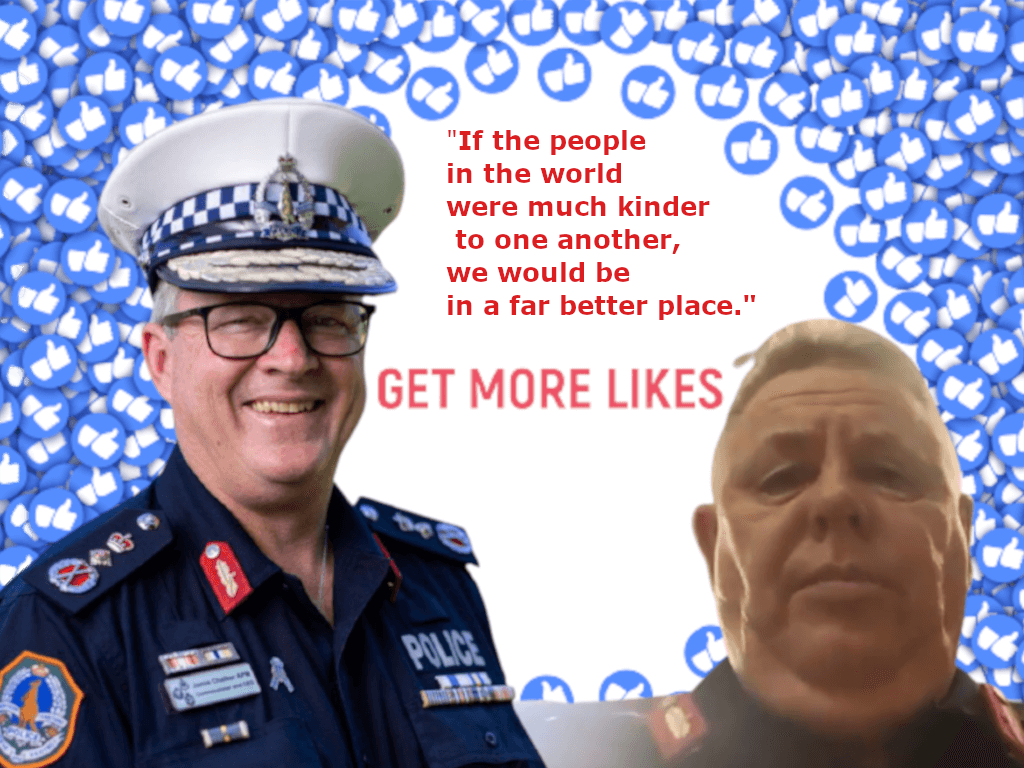 Police Commissioner Jamie Chalker has ruled out any disciplinary action against Deputy Commissioner Murray Smalpage after Mr Smalpage accidentally live-streamed himself making controversial comments to social media, stating that if the “people in the world were much kinder to one another, we would be in a far better place”.

Mr Chalker issued a statement this morning in which he said that it was clear Mr Smalpage did not intend to have his comments, including that a group of police officers should be called “a murder”, broadcast publicly and therefore no action would be taken against him for what he said.

“The statement that appears to have caused the most offence is one which Deputy Commissioner Smalpage has been up front about owning and stating his clear position that he did not intend to cause such offence,” he said.

“Deputy Commissioner Smalpage has taken ownership of his statements in the workplace and put out a public statement on Sunday morning.

“He clearly did not expect his comments to be broadcast to such a wide audience and this circumstance is one that serves as a timely reminder that your smartphones can be inadvertently activated as occurred on this occasion.”

However, Mr Smalpage had the police media unit issue a statement on Sunday with a qualified apology “if my remarks were construed in any other way”.

The statement was only issued after the recording had been shared across social media over the weekend, not when it was first broadcast some time last week.

The video, taken with Mr Smalpage’s phone and live-streamed to Facebook,  showed Mr Smalpage entering an executive police office while those in attendance discussed the collective noun for officers.

A female staffer is heard suggesting “a mess of officers” would be appropriate, when Mr Smalpage interjects to suggest “a murder” of officers would be the preferred noun before laughing and walking off.

He then appears to say in the short video that he “could always afford to get paid more” to another staffer, before sitting down in an executive level meeting with Bruce Porter, the head of the NT Police Professional Standards Command.

As Deputy Commissioner Mr Smalpage is paid in excess of $250,000 per year.

The “murder” comment was viewed as offensive by some NT police officers and members of the public who suggested that Mr Smalpage was poking fun of Constable Zac Rolfe who is currently charged with murder over the shooting death of Kumanjayi Walker in Yuendumu in 2019.

He called on Mr Chalker to show leadership and explain “what action he intends to take given the reputational damage to the police force following the careless release of this video”.

Mr McCue added that rank-and-file officers are regularly subjected to disciplinary proceedings for issues similar to Mr Smalpage’s social media post and that the police brass should be held to the same standards.

But Mr Chalker ruled out an investigation in his statement.

“The video and apology of Deputy Commissioner Smalpage speak for themselves and as such no investigation is required,” he said.

“I am disappointed that the comments have caused offence and apologise to those that have been impacted by them.”

Mr Chalker then bizarrely took a swipe at social media in general and offered his thoughts on making the world a better place.

“Social media vitriol is a sad reality in our professional and private lives which deeply impacts people’s morality and notably mental health and wellbeing,” he said.

“If the people in the world were much kinder to one another, we would be in a far better place.”

He did not specifically address the “murder” comment in the statement or explain how that played into the “social media vitriol” he decried, but said “within the video there is no reference that can be taken to be statements directed to a particular individual or that contained any defamatory or demeaning comments attributed to a person or their beliefs, choices or appearance”.

Police Minister Nicole Manison has not issued any comment on the matter.