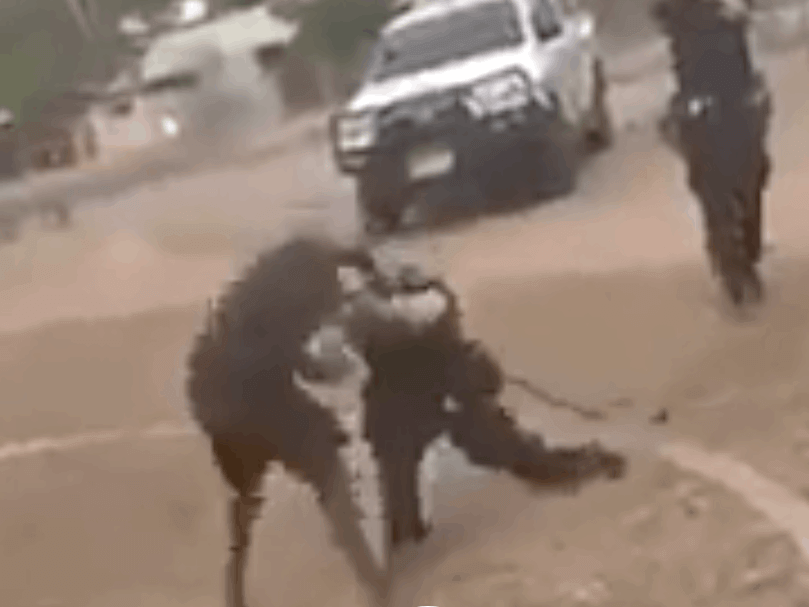 A shocking video showing two NT Police officers struggling to arrest a 14-year-old female in Alice Springs before being hit and kicked by her has been condemned by the police union as a “vicious attack” on the officers.

The video appears to have been filmed by friends of the teen, who are heard cheering and laughing. It was uploaded to Facebook on Tuesday and racked up more than 1000 shares, 455 likes and 290 comments by Thursday afternoon.

NTPA president Paul McCue called the girl’s attack on the officers “abhorrent” and described the onlookers’ conduct as “disgusting”.

“Our members were attempting to arrest a 14-year-old girl for breach of bail, when they were viciously attacked,” Mr McCue said in a statement.

“A female officer suffered bruising to her face after she was punched several times and dragged along the ground by her hair. She was also scratched and bitten during the assault, while the male officer was spat on.

“This was a shocking, savage attack and a clear message needs to be sent that this type of violent behaviour will not be tolerated by the community.

“We continue to lobby government for harsher penalties for our frontline workers, they are not employed to be the public’s punching bag.”

The video ends after backup arrives and the female is put in the back of the paddy wagon by half a dozen officers.

The girl has been charged with one count of resisting arrest and four counts of assaulting a police officer, NT Police said in a statement.

The teen was remanded in custody and police said she would “appear before court at a later date”.

“To kick and spit on officers will never be acceptable,” Alice Springs Superintendent Brett Prowse said.

“Despite being attacked, the responding police officers remained composed, professional and measured in their approach.  I want to acknowledge these officers and their peers, who continue working tirelessly to keep all Territorians safe 24 hours a day, 7 days a week.”

Mr McCue said the “community as a whole should be outraged” by the attack and put pressure on the Gunner Government to review its decision to decriminalise breach of bail.

“Breach of bail was decriminalised by this Labor government, so when the Chief Minister says there would be ‘consequences’ for unlawful behaviour, we want to know what that is, because the issue has become a revolving door for police,” Mr McCue said.

“We’re seeking an urgent review of that legislative change.”