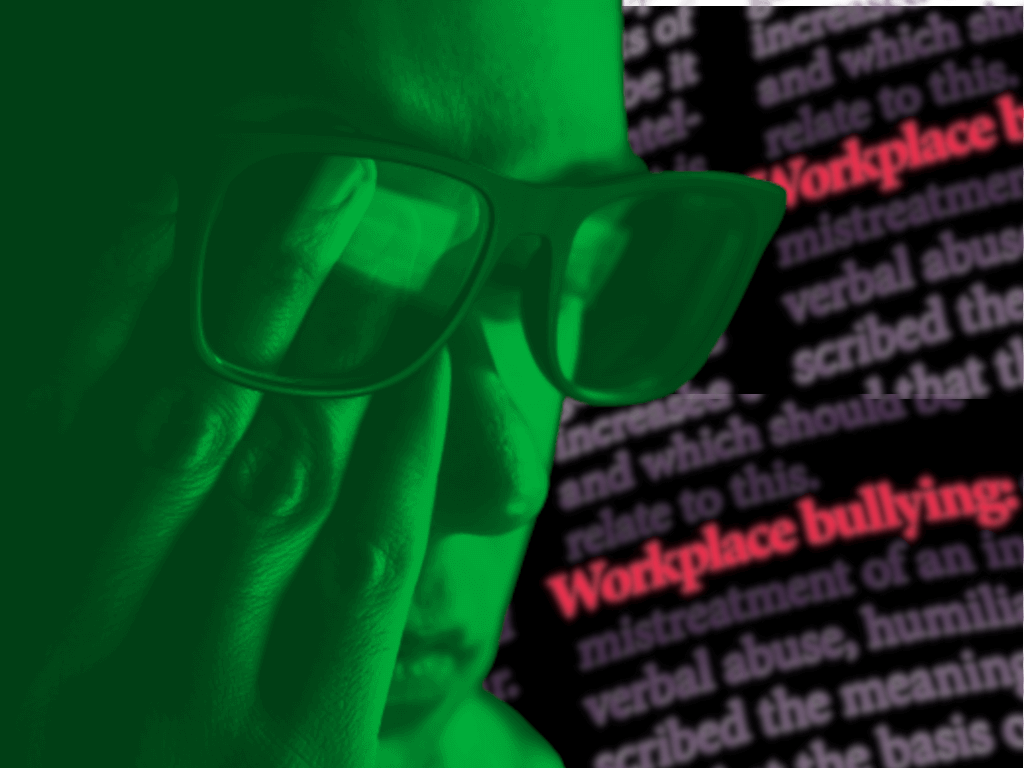 The Territory Government is set to finally create a full public service sexual harassment policy in response to high levels of bullying and sexual harassment identified in a whole of government survey, a draft response to the survey shows, but the Community and Public Sector Union wants an independent complaint mechanism created to address rampant abuse.

The response comes as figures show public service cases of bullying and sexual harassment increased since the Gunner Government came to power in 2016, including the number of employees unwilling to report it formally.

The one page draft response plan to the damning survey, which has been put out to public servants for feedback, focuses on three areas; senior management communication and vision; feedback and performance management; and addressing inappropriate workplace behaviour.

There were 9,581 anonymous respondents – or 46 per cent of the total workforce – to the NT People Matter Survey which was leaked to the NT Independent last week.

Of those who said they had been bullied or sexually harassed, 84 per cent did not submit a formal complaint.

CPSU NT secretary Kay Densley said a representative of Engine – the company that conducted the survey – said of the nine per cent of respondents who said they would prefer not to say if they’d been bullied or sexually harassed, usually that response meant they actually had been but did not feel safe saying they were, even in an anonymous survey.

Ms Densely said people were required to give their name and the agency in which they worked when filling out the survey, with the promise the name would be removed from results provided to their agency, but having to do that might make people not be part of the survey.

She also called for an independent complaints process about abuse that is conducted outside the person’s own agency.

“You can’t have an HR person dealing with a bullying complaint against someone who is actually their boss,” she said.

“This is a pretty damning report,” she said, “The other thing is only 29 per cent believe the survey results will bring action.

“I think it is concerning that people don’t think there is going to be anything done because if you look at the previous survey there wasn’t a lot done.

“Unfortunately in some workplaces it is just rife to the point that it affects some people’s sanity.”

Only 55 per cent of respondents in 2021 believed improper conduct was investigated thoroughly and objectively, while less than half – or 47 per cent of public servants – thought recruitment and promotions were based on merit.

The contents of the draft response

The draft response proposes creating guides and a “developmental framework” for senior managers to communicate their agency’s vision more effectively. There is also a new strategy proposed for promoting people from middle to senior management focusing on ethics, flexibility, resilience, and rewarding innovation. As well as providing performance management development and training for all new managers.

The government also proposes to develop digital training to teach managers how to have performance and other crucial conversations with employees. They also aim to focus on employees taking responsibility for their career and capability development though “partnership with supervisor/manager”. And they would continue to use something called the Results Through People – Getting Great Performance (Performance Conversations) course through the Office of the Commissioner of Public Employment.

The government also proposed developing an NT public service induction program including essential training modules, and continuing to develop middle manager’s people skills through the Officer of the Commissioner for Public Employment. 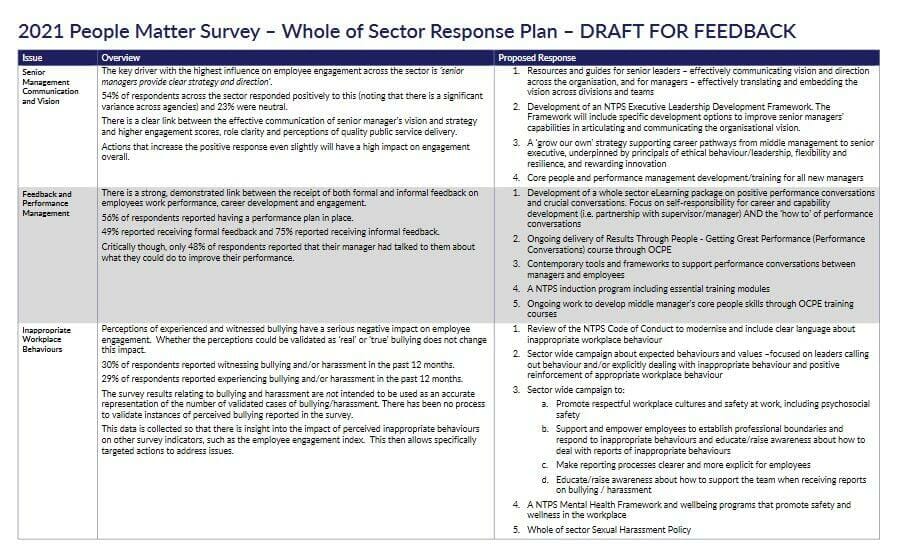 The government also proposes to review the NTPS code of conduct to include “clear language about inappropriate workplace behaviour”.

And they propose to make reporting processes clearer and more explicit for employees and educate people how to support teams when receiving reports on bullying and harassment.

Also proposed are well being programs promoting safety and wellness, and a mental health framework and sexual harassment policy that cover the entire public service.

Chief Minister Michael Gunner’s acting communications director Jamie Collins refused to answer questions about the draft response and would not clarify if there was an existing public service sexual harassment policy, or if it was handled on an agency-by-agency basis.

In failing to answer the questions, Mr Gunner is breaking the Legislative Assembly (Members’ Code of Conduct and Ethical Standards) Act 2008 and could face Privileges Committee sanctions.

‘A process where you can actually get action’: A need for an independent complaints process

Ms Densley said the draft response had not gone far enough and there needed to be a complaints process that operated outside people’s own agencies.

“We’re getting lots of cases that we deal with…the vast majority of them are credible,” she said.

“They are not asking people what needs to be done. So again it will be left up to executive teams to do all the stuff and then dribble it down.

“There might be some agencies that do it well. I am not saying they are all bad. But it will be one of these highfalutin things and they will make up all these policies and put in training or whatever.

“A lot of people don’t like meditation and sometimes mediation won’t help. Sometimes people just need a stern talking to about their attitude and how they should be talking to people

“They need to be doing more and holding people responsible. And have a process where you can actually get action.

“We are trying to get people to put in grievances, but it takes a long time and it doesn’t always get action. It is tough.”

She said the Department of Corporate and Digital Development, which houses human resources, was putting together a group that would look at grievance handling procedures but they had not been told the detail of how it would operate.

Ms Densely said the government had also agreed to change the domestic violence leave back to domestic, family and sexual violence, as it was in 2012, which was a positive move. And people would be able to change their workplace and phone number to protect them from abusive work colleagues.

She also said a lot of managers were not trained how to give informal feedback properly, something that the draft response aimed to address.

Ms Densely said she had been involved with a case where they brought together six bullying complainants against two managers to human resources and the process took months, and the people who complained felt harassed because they had complained, and nothing happened.

“And the HR team at the time said well we have to look at each one of these separately. And because they couldn’t prove each separate one they disregarded a bulk of people’s complaints against a manager,” she said.

“So that is the sort of thing that is going on.”

The Public Employment Minister Paul Kirby and the Commissioner for Public Employment, Vicki Telfer, told the NT News they had begun a review of the public service code of conduct after the embarrassing leak of the survey results to the NT Independent.

An unnamed “spokesperson” told that paper it would include staff training and a review of bullying and sexual harassment reporting procedures.

“This government does not tolerate bullying and sexual harassment in any workplace,” the government spokeswoman said, which was later attributed to Mr Kirby.

This is despite the fact that the percentage of employees who said they had been bullied and sexually harassed has increased since Labor came to power in 2016.