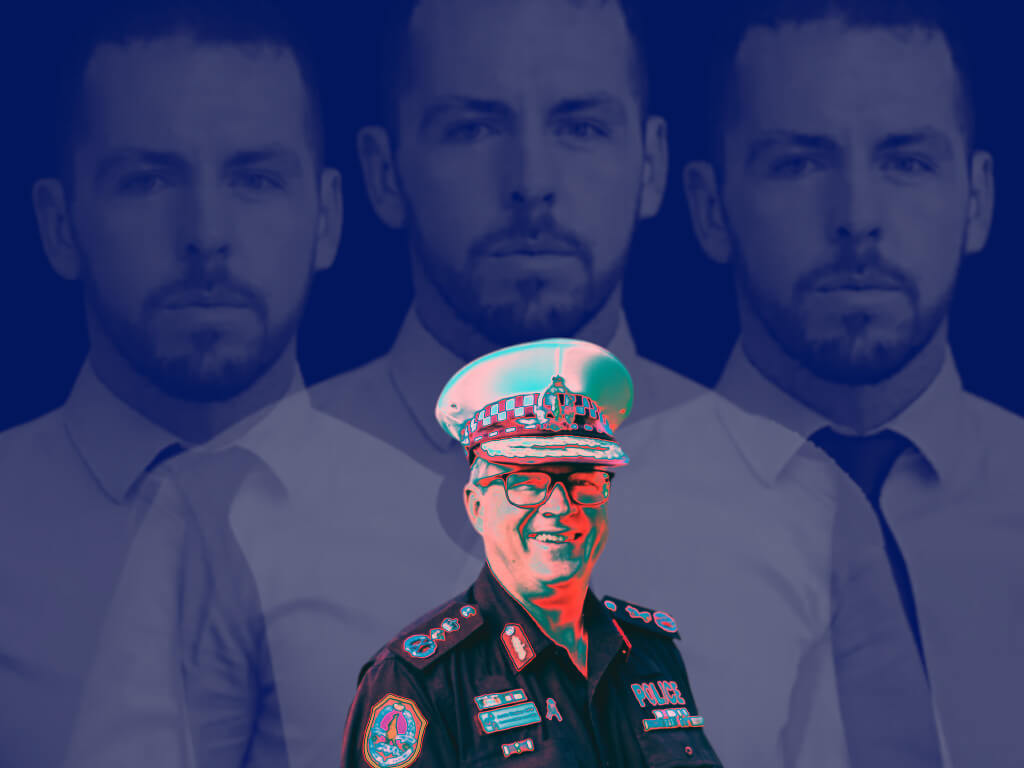 Police Commissioner Jamie Chalker, along with other police executives, made the decision to charge Constable Zach Rolfe with murder, police diary notes show, which directly contradicts the top cop’s claims last week that he had never been in a meeting where the charge was discussed, and was not involved in the process to charge.

Notes previously made public by the NT Independent from Detective Superintendent Kirk Pennuto – who was the lead investigator into the shooting death of Kumanjayi Walker – show that Mr Chalker was in a meeting with senior police executives in then Acting Deputy Police Commissioner Michael White’s office, following Mr White and Assistant Commissioner Nick Anticich returning from a meeting with DPP then-director Jack Karczewski, who is said to have recommended a murder charge on Wednesday, November 13, 2019 – four days after the shooting.

The Office of the Independent Commissioner Against Corruption announced on Tuesday it would investigate the decision to charge Constable Rolfe with murder, following weeks of allegations of political interference in the rushed decision to charge.

Mr Walker, 19, was shot three times by Constable Rolfe after he stabbed the officer in the shoulder – and allegedly attempted to stab his partner Sergeant Adam Eberl – in an attempted arrest in the remote Aboriginal community of Yuendumu, on the night of Saturday, November 9, 2019, four days before Mr Chalker’s meeting.

Constable Rolfe was found not guilty of murder, and two alternative charges of manslaughter and engaging in a violent act causing death, by a Supreme Court jury on March 11, after an almost five-week trial.

In diary notes from November 2019, written by then-Detective Senior Sergeant Mark Grieve roughly 90 minutes after Mr Chalker’s meeting with executives, he said the decision for the arrest and murder charge came from the “top level of police” before specifically mentioning the Police Commissioner.

“5.03pm update from Pennuto – arrest of Rolfe. Murder. Couldn’t go into detail however director/deputy director provided Prima Facie case of murder based on 2/3 shots,” he wrote.

READ: The silent standoff: The Police Commissioner, the Chief Minister, and the Police Minister stare down reality

They told media manager Rob Cross, who was in the meeting, to craft a media strategy around the call to arrest Constable Zach Rolfe, with “one consistent message” for the public: that then-assistant commissioner Nick Anticich was the man who confirmed the directive to arrest and charge, Det Supt Pennuto’s notes revealed. Police announced Mr Anticich’s retirement last June, shortly before the original trial date.

Det Snr Sgt Grieve was one of at least five detectives investigating who raised concerns about the highly unusual involvement of the DPP before an investigation was finished, the speed at which the charges were being considered, and the handing over of an unfinished brief of evidence as the basis for a decision on potential charges.

“Member disagreed with this direction due to large amount of evidence/information to yet be reviewed,” he noted before the charges was laid.

“Consensus that this appears to be an abnormal situation and none of the members are completely happy with the report to bring interview forward or DPP involvement.”

In a press conference last Wednesday, Mr Chalker told the media the investigation was done at “arm’s length” from him, and that he had never been involved in a meeting where the charges were discussed. He was asked, on the basis of the concerns outlined in the police notes, why Constable Rolfe was charged so quickly.

“I can’t give you an answer to that because I wasn’t involved in that,” he said.

“I’ve remained at arms-length from the investigation for the whole period of time,” he said. “The matter to charge (Constable Rolfe) was a matter for the investigation team and the DPP. I was as shocked as anybody…

“The decision to charge was a matter between the investigation team and the DPP. I can’t proffer you an opinion on that conversation, there was no meeting that I was involved in and was privy to it.”

He went on to say that he had never asked who had decided to charge Constable Rolfe.

This is despite the fact since revealed by the NT Independent, that Mr Chalker personally referred the shooting by Constable Rolfe to the Territory’s anti-corruption body for what he described as “suspected improper conduct” at an unspecified time on Monday, November 11, 2019, less than 48 hours after the incident, before any charges were filed and while facts were still being collected, according to the ICAC Inspector’s annual report.

The referral came amid a push by the police brass to pursue charges despite concerns by detectives that the matter was being rushed before all evidence “was available to make a considered opinion”.

Mr Chalker’s referral was made under the section of the ICAC Act, which mandates public officials to report suspected improper conduct or misconduct. However, ICAC reporting guidelines for public servants specifically state that there must be a “reasonable” suspicion backed up with “one fact or more upon which your suspicion is based”.

On Tuesday the Independent Commissioner Against Corruption Michael Riches announced the Territory’s anti-corruption body would investigate allegations of political interference in the charging of Constable Zach Rolfe.

“I will investigate allegations of improper conduct relating to the arrest and charge of Mr Zachary Rolfe,” he said in a statement.

“My investigation will focus upon the period between the shooting incident and the presentation of Mr Rolfe for charging. In due course I will consider whether I will hear some or all witnesses by way of public inquiry.”