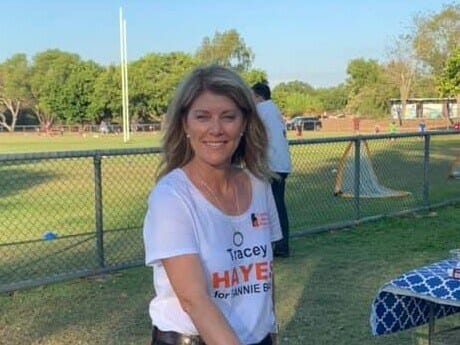 Ms Hayes filed a formal complaint on Wednesday about the posts that the NTEC determined to be “personal and offensive”. She told the NT Independent on Thursday night that more than 30 other matters have been forwarded as well.

The NTEC said in a statement that the posts appear to have been “posted using an alias” and that the creator could face the massive fine for breaching the Electoral Act.

“The NTEC has sought further information on these posts and possibly other similar posts,” the statement said.“The NTEC has an arrangement with social media companies to bring inappropriate content to the attention of a senior officer.”

“Ultimately it is a matter for these organisations on whether these posts are removed, account closed or any other appropriate action taken.”

However, the statement said that the Electoral Act “requires campaign material to be authorised, meaning the name of the author must be disclosed”, it said.

“As these posts appear to be posted using an alias they are potentially a breach of this provision. The maximum penalty for breaching this provision is 100 penalty units.”

She said on Thursday night that she has referred more than 30 Facebook profiles that post “defamatory, offensive and untrue comments” to the NTEC.

“It would appear the intent is malicious and designed to bully and intimidate,” Ms Hayes said.

“Our family are one in the view that NT politics can be better than this and its hardened our resolve to continue to contribute to the Territory’s future. This is not a standard we are prepared to accept.”
Earlier this week, Ms Hayes drew the ire of the SDA union for retail workers after running a campaign ad highlighting the contrast between her and Fannie Bay opponent Michael Gunner’s work and life experience, in which she pointed out that Mr Gunner’s professional experience before coming to politics was stocking shelves at Big W.
The SDA called the ad a “disgrace” and attempted to link it to an attack on all retail workers, which Ms Hayes denied.
(Visited 1,615 times, 1 visits today)